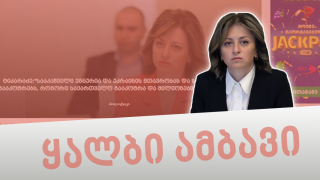 Ekaterine Tikaradze’s fabricated quote has been disseminated through social networks. According to the information reported by clickbait websites (websites promoting such content to increase the number of internet readers by encouraging people to click on a link), Ekaterine Tikaradze spoke about the former President of Georgia, Mikheil Saakashvili, and called him half-witted. It was also reported that Ms Tikaradze had stated the following: “Saakashvili will bankrupt the state and the government of Ukraine, like he made Georgia bankrupt and pocketed millions.”

Different sources link this phrase to different events, although both of them ascribe it to Ekaterine Tikaradze. According to the 6 May 2020 article of Netsport.ge, Ms Tikaradze was making a comment about Mikheil Saakashvili’s possible appointment as Ukraine’s Deputy Prime Minister. However, according to the article of Publishers.ge, Ms Tikaradze used this phrase in connection to Saakashvili’s statement, urging the Government of Georgia to appeal to Malta and get vaccines for free.

In fact, the first part of the quotation published in the article of Netsport.ge – “It is not nice and at least it is embarrassing when Ukraine and Georgia are strategic partners and they try to appoint a person, who has been found guilty of very serious charges by the courts of all three instances here in Georgia, to a high position in Ukraine” – belongs to Kakhi Kaladze instead of Ekaterine Tikaradze. Mr Kaladze made this statement on 28 April 2020. The statement was made in connection to Mikheil Saakashvili’s potential appointment as the Deputy Prime Minister of Ukraine.

On 22 April 2020, the former President of Georgia, posted on Facebook that he had received an offer from the President of Ukraine, Volodymyr Zelensky, to be appointed as the Deputy Prime Minister.

In addition, the source which Netsport.ge indicates at the end of the article – mysport.net.ge – is currently unavailable.

In regard to the article of Publishers.ge, the second part of the quotation printed in the article indeed belongs to Ekaterine Tikaradze. On 28 January 2021, Ms Tikaradze said that Mikheil Saakashvili’s statement on the vaccines was a total lie and an attempt to mislead the population. As stated by Ms Tikaradze, the Government of Malta does not have sufficient doses of vaccines for its own citizens and, therefore, Georgia’s requests would not be granted. However, the phrase in the first part of the article does not belong to Ekaterine Tikaradze and also cannot be found in any open sources.

This fabricated quotation is mostly disseminated in the name of Mikheil Saakashvili, the United National Movement party and Facebook accounts affiliated with the party.