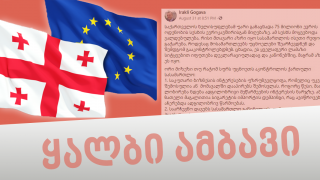 Disinformation: The EUR 75 million loan included an obligation that foreigners would be selecting and controlling the judges.

On 31 August 2021, Facebook user Irakli Gogava made a publication which contains disinformation and aims to discredit the EU and Georgia’s partner countries. Thus far, the publication has garnered 176 shares. Openly anti-Western and pro-Russian individuals and organisations, including the Georgian-language Facebook page of the World Family Congress which has an affiliation with Levan Vasadze, are among those who reposted this publication.

The author of the publication stated that the EUR 75 million loan [1] which Georgia was supposed to take included an obligation from the EU in that the “main idea was to implement such a reform of the judiciary where foreigners would select and control the judges.”

Of these claims, the only truth is that the principal pre-condition of the macro-financial assistance indeed pertained to the reform of the judiciary whilst the rest is false information.

On 25 May 2020, the European Parliament and the European Council approved an allocation of up to EUR 150 million in macro-financial assistance [2] to Georgia as a loan. Of this amount, the first instalment in the amount of EUR 75 million has been allocated almost without any pre-conditions [3] and Georgia has already made use of those funds.

“To increase the independence, accountability and quality of the judicial system, the Georgian authorities will, in line with two packages of judicial reforms adopted in 2017 and 2019:

1) Further enhance transparency and merit-based selections in the appointment of judges to first instance and appeal courts, notably by publishing written justifications for appointments of judges with reference to integrity and competence criteria.

2) Submit to the Parliament draft legislation on the appointments to the Supreme Court in line with the related Venice Commission Opinion No. 949/2019 of 24 June 2019, notably as concerns the staggered approach to appointments, open voting in the High Council of Justice, and the need for the latter to justify the nominations.

3) Refrain from making appointments to the Supreme Court under the existing rules and start accepting applications from new candidates as the new law enters into force.

4) Adopt the legislation implementing the ruling of the Constitutional Court of Georgia from June 2019 by setting rules for the publication of judicial decisions.

These conditions, pertaining to the judiciary in the Memorandum of Understanding, were later precisely reflected in Charles Michel’s Document which was produced within the scope of the 19 April Agreement and from which the Georgian Dream withdrew on 28 July 2021.

None of the conditions in the aforementioned documents envision the involvement of foreign nationals in selecting judges for the Georgian judiciary, let alone controlling them. Therefore, stating that the pre-condition of the EUR 75 million loan from the EU was the implementation of such reforms where foreigners would select and control the judges is an item of disinformation given that there is no evidence to support this claim.

Of note is that the Georgian Dream started to breach the Charles Michel’s Document before withdrawing from the agreement and broke the conditions envisioned for the reform of the judiciary (see FactCheck’s articles – link 1 and link 2).

Afterwards, on 29 July 2021, the ruling party announced at the special briefing that the Georgian Dream quit the agreement brokered by the European Council President, Charles Michel. On 31 August 2021, it was reported that Georgia refused to take the second disbursement in the amount of EUR 75 million from the total EUR 150 million in micro-financial assistance from the EU.

Shortly thereafter, the EU Representation to Georgia released a statement that that Georgia failed to sufficiently address the condition for this macro-financial assistance and, notably, to increase the independence, accountability and quality of the judicial system.

Given all of the aforementioned factors, we may say that the Government of Georgia simply went ahead of the EU in order to make a statement to make it look like it was Georgia that refused to take the financial assistance which, in fact, it would not be receiving owing to the failure of the government to respect the commitments it took.

[1] Georgia was supposed to take that loan within the scope of the assistance to tackle the challenges brought by the COVID-19 pandemic-induced crisis.

[3] The loan was disbursed on the condition of meeting the commitments agreed between Georgia and the International Monetary Fund.