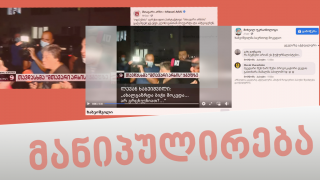 On 16 September 2021, the Mikheil Ukrainologi Facebook page published video footage which shows the confrontation between Georgian Dream supporters and United National Movement member Levan Khabeishvili in Kareli over the accident which took place at the Georgian Dream’s office. The video has the following description: “Levan Khabeishvili: A young man has died. Have you no shame?” The video footage, doctored by the aforementioned Facebook page, and the description gives the impression that Levan Khabeishvili promotes disinformation about the injured cameraman and claims that the cameraman died as a result of the incident.

The aforementioned incident took place on 15 September 2021 at the Georgian Dream’s Kareli office. As a result of the incident, Levan Ablotia, a Mtavari Arkhi cameraman, was injured.

Levan Khabeishvili’s words are perfectly audible in the video footage as well as the original video recording released by Mtavari Arkhi (from 1:38): “A young man nearly died, why did you come here, have you no shame?” The video, doctored by the Mikheil Ukrainologi Facebook page, aims to mislead people and make them believe that Levan Khabeishvili spreads deliberate disinformation about the injured cameraman.

Of note is that the Mikheil Ukrainologi Facebook page has been involved in a deliberate smearing campaign against opposition political parties, leaders, members and supporters. According to the reports published by the International Society for Free Elections and Democracy (ISFED), the main target of the Facebook page’s efforts is the United National Movement. At the same time, the Facebook page supports the Georgian Dream and attacks any individual, civic activist or media outlet which is critical of the current authorities.