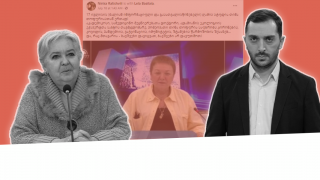 The footage of media union Obiektivi’s show Night Studio, which contains multiple manipulative and false information about COVID-19 vaccine, was disseminated in social networks. The guest of the TV show was the notorious anti-vaxxer and homeopath, Tina Topuria, who constantly promotes disinformation vis-à-vis COVID-19 vaccines.

Claim: If a vaccinated person gets infected with the virus, his variant will be stronger as compared to that of someone who is unvaccinated… New coronavirus variants emerge because of vaccination.

The claim that vaccines facilitate the mutation of the virus and the emergence of more dangerous variants is fake news.

The SARS-COV-2 virus mutates over time and new variants emerge. The lower the vaccination level is, the higher is the probability of virus mutation. Allowing the virus to spread freely will help mutations and the emergence of more dangerous variants.

In his interview with FactCheck, allergist-immunologist Bidzina Kulumbegov explains: “The emergence of new variants is characteristic to viruses. The higher the number of people which the virus has infected, the more it mutates and new variants start to emerge. The more people are vaccinated, the more the virus weakens and the ability of mutation goes down.”

There is no scientific evidence whatsoever as well as any grounds to believe that vaccinated people help virus mutation and the emergence of more dangerous variants.

Claim: It has already been proven that mRNA vaccines alter genetics.

One of the most widespread myths is that vaccines can alter genetic code/DNA. In reality, mRNA vaccines bear no effect on human DNA.

Vaccines, including mRNA vaccines, do not penetrate the nucleus of the human cell where our DNA (genetic sample) is stored and, therefore, it cannot make any changes there. The only function of a vaccine is to produce immunity against the disease. After vaccination, when the immune system generates a protein or a fragment of a protein, the mRNA molecule is dissolved and the immune system gets rid of it. Therefore, COVID-19 vaccines are not able to change human genetics.

Claim: One of Sinopharm’s side effects is diabetes.

As stated by Tina Topuria, this entry was in the German language and was later removed. According to Ms Topuria, her claim is based on this information.

Sinopharm is authorised by the World Health Organisation (WHO). Of note is that before issuing the emergency use authorisation, vaccines have to undergo massive and detailed verification. The verification process includes testing from independent experts and WHO teams, the II and III phases of clinical trials and the strict assessment of safety, efficacy, quality data and risks. Neither Sinopharm’s producer nor the WHO have indicated that diabetes is a side effect of the Sinopharm vaccine.

In his interview with FactCheck, Bidzina Kulumbegov explains: “Diabetes is not in any way a side effect of the Sinopharm vaccine. The third phase trials showed that in the case of diabetes, the vaccine efficacy [protection] figure is relatively lower. This is perhaps the origin of this myth. People with diabetes and other chronic ailments definitely have to get vaccinated since they have a poor immune system and in the case of infection with COVID-19, will face a comparably higher risk of severe disease.”

Claim: Despite high vaccine roll-out, there is a catastrophic situation everywhere… For instance, Israel…

Currently, the Delta variant is becoming dominant across the world. There are rising numbers of confirmed cases, including among vaccinated people. COVID-19 vaccines have lower efficacy vis-à-vis the new variants, although their protection level from severe illnesses and fatality is still high which is proven by relevant studies.

If we take a look at Israel’s example, confirmed cases are on the rise, although the mortality rate is basically unchanged owing to a strong vaccine roll-out. There are one or two cases of death per day on average in Israel.

Bidzina Kulumbegov, speaking about this manipulation in his interview with FactCheck, stated: “All the authorised vaccines (including Sinopharm and SinoVac) protect from severe cases and death vis-à-vis all variants. If we take a look at the trend among vaccinated people, where there are growing infection numbers with new variants, the level of protection from hospitalisation and mortality is around 80%-90%.”