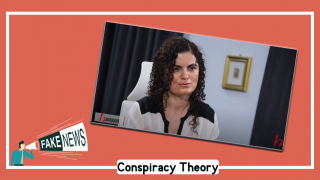 In an Interview with Hraparak TV, Tereza Mkhitaryan, who resides in Switzerland, shared conspiracy theories about Jews and George Soros. She also manipulated the decision of the Armenian government enforced in April 2021 regarding industrial hemp manufacture; she saw hidden intentions behind the decision.

Conspiracy Theories From the Benefactor

The financier and the head of the charity organization Germoglio, Tereza Mkhitaryan, shared conspiracy theories about the Jews and George Soros during her interview with Hraparak TV and manipulated the decision about the industrial hemp. Furthermore, she linked this decision with hidden intentions.

According to her, outside powers control the post-revolution government, specifically the US Central Intelligence Agency (CIA). Mkhitaryan does not bring any evidence to back her theory. However, she asserts that what she states is a “fact, not an opinion.”

Mkhitaryan explains that her experience as a financier and the examples she has witnessed in different countries have brought her to the conclusion that the world is controlled by a single center: the USA. The whole world is financed by” America, to be more precise, by “several Jews in America.”

According to Tereza Mkhitaryan, these people want to buy the world with their money and control it in a way that would benefit them. Their ideology, according to the same analyst, is to have “fewer people on the face of the Earth, none of them being Christian, and all – high on marijuana.” To have a world without “borders, manliness, languages, knowledge of history, integrity, and honor.”

In addition, Mkhitaryan asserts that Armenia has enacted the law about this narcotic because “marijuana changes a person’s brain… it detaches one from reality, and that is the fundamental goal of Satan – to detach people from the real world… If you get all the boys in the country high on weed, who will go to the border? Who protects the borders of Georgia? No one! They could take over Georgia in only half a minute. That’s how weak they have gotten.”

She makes a smooth transition from the topic of marijuana to that of Soros' money, generously handed out to the “huffies” to make a “huffy net”. What is more, this is not the beginning of Armenian disintegration, it started “with Levon Ter-Petrosyan when the CIA brought its person: Ter-Petrosyan [to power] after the collapse of the Soviet Union.”

Months before this interview, Mkhitaryan had already spoken about the Open Society Foundations and their media platforms financed from Armenia. In this interview, she reiterates and further develops the narrative. According to her, this Soros net, including the media platforms feeding on their funds, has been disputing the values listed by her – the resistance against which is on the agenda of the world-controlling powers.

As for the Jews controlling the world from one single center, the “Soros’ hussies”, Levon Ter-Petrosyan being America’s person, these belong to the genre of conspiracy theories. You can read further about those theories on Soros here. It is characteristic of this genre to present alleged truths, find obvious links, and make the simplest conclusions. This is what Mkhitaryan is doing without factual evidence while regarding her judgments as facts, not opinions. Overall, these claims are not based on facts and support a conspiracy theory.

What Do the Facts Say?

Besides spreading conspiracy theories and presenting them as truth, Tereza Mkhitaryan also distorts the facts.

Her statement that Armenia has enacted the law about this narcotic is false and manipulative: all forms of narcotic drugs are illegal in Armenia.

The law that she refers to is not about legalizing marijuana but for allowing its industrial production. On April 29, 2021, the Armenian government approved the production, import, export, and commerce of industrial hemp. Considering the risks, this enterprise requires a license, which will not be granted to those who have violated the law on drugs and to people who have drug addictions.

The government made this decision for economic reasons. The reason they gave for implementing the law was that ⅓ of the Armenian agricultural lands are barren.

The Armenian government decided on cultivating and processing cannabis after the war and the epidemic. They clarified that the purpose of this was to recover the economy; the government offers to provide the necessary preconditions for growing and processing new kinds of cultivated seeds that will have higher added values. One of the options, they suggest, is to grow industrial hemp, which has shown positive results in Russia, the USA, and China. Fibers and oil can be extracted and processed from industrial cannabis and used for manufacturing various products.

Considering the possible misguidance, Prime Minister Nikol Pashinyan has explained during a congress session that “unfortunately we understand something else by saying cannabis, while in reality, it is a crucial agricultural stock. In this case, it is the cultivation of industrial hemp that we are talking about, which, of course, has its risks; the mechanisms for controlling those risks do exist and have been implemented in several countries already. Of course, we will have to proceed with the program with the utmost care.”

Therefore, Tereza Mkhitaryan’s claims are entirely baseless since weed and any other narcotic drugs are illegal in Armenia. The government allowed the cultivation and processing of industrial hemp used for manufacturing purposes.