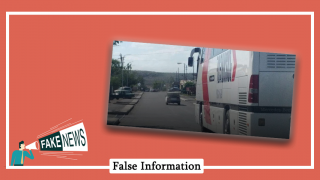 False Information: The Bus Transporting People to Kocharyan’s Rally Has Had an Accident

False Information: The Bus Transporting People to Kocharyan’s Rally Has Had an Accident

On June 18, the website Civic.am wrote, “they have been bringing people from Artsakh since the morning to participate in Robert Kocharyan’s rally. One of the buses had an accident, 5 people were transported to the hospital.“

The website writes that they received the information from one of the residents of Sisian city and that the accident took place around the village Sarnakunk. Civic.am also referred to the Sisian Medical Center, which informed the website that there were 5 injured, 4 of which were women and children.

Civic.am cited unnamed sources, saying that it was the Secretary of the Nagorno-Karabakh Security Council – Vitaliy Balasanyan who was “bringing” the people from Karabakh to participate in Kocharyan’s rally.

A Bus Crash Was Not Reported

Media.am and Factcheck.ge contacted the police station in the town of Sisian to check the information. The police informed us that an accident that left 5 people injured had indeed happened, but the crash involved an SUV, not a bus.

The police mentioned that the accident took place at noon on the Yerevan-Meghri road. “The car was a personal vehicle – a Nissan X-trail. There’s a driver with bodily injuries, together with his family,“ the police told us.

The Sisian police also confirmed that no bus accidents had happened on the mentioned date, June 18.

The Family Traveled With Its Car

Facebook user Balyan Vardan wrote that the people in the car crash were his relatives, and they were not going to Kocharyan’s rally. To answer Media.am’s question, Balyan said: “these were my relatives, who were returning to Artsakh from Yerevan. The crash took place at noon. The driver lost control due to a technical defect in the car. The car rolled sideways.“

Balyan said that the family members mostly had minor injuries: “They were in the Sisian hospital in the evening. Two of them – in the military hospital in Aghitu. One of the family members is in an extremely severe condition. Doctors arrived from Yerevan by helicopter. Samvel was in terrible shape, they were unable to transport him. There was no bus. They were traveling in a car; the accident happened near Sarnakunk. There is a gorge there before you reach the village,” Vardan Balyan was saying. ''I accidentally saw it on Hovsep’s [Hovsep Khurshudyan, head of the "Free Citizen" NGO] page. Then I realized the media were also sharing [the news]”, he added.

Vardan Balyan, without knowing the details Media.am and Factcheck.ge had learned from the police, also said that the accident took place at noon and it involved a private car of a family. 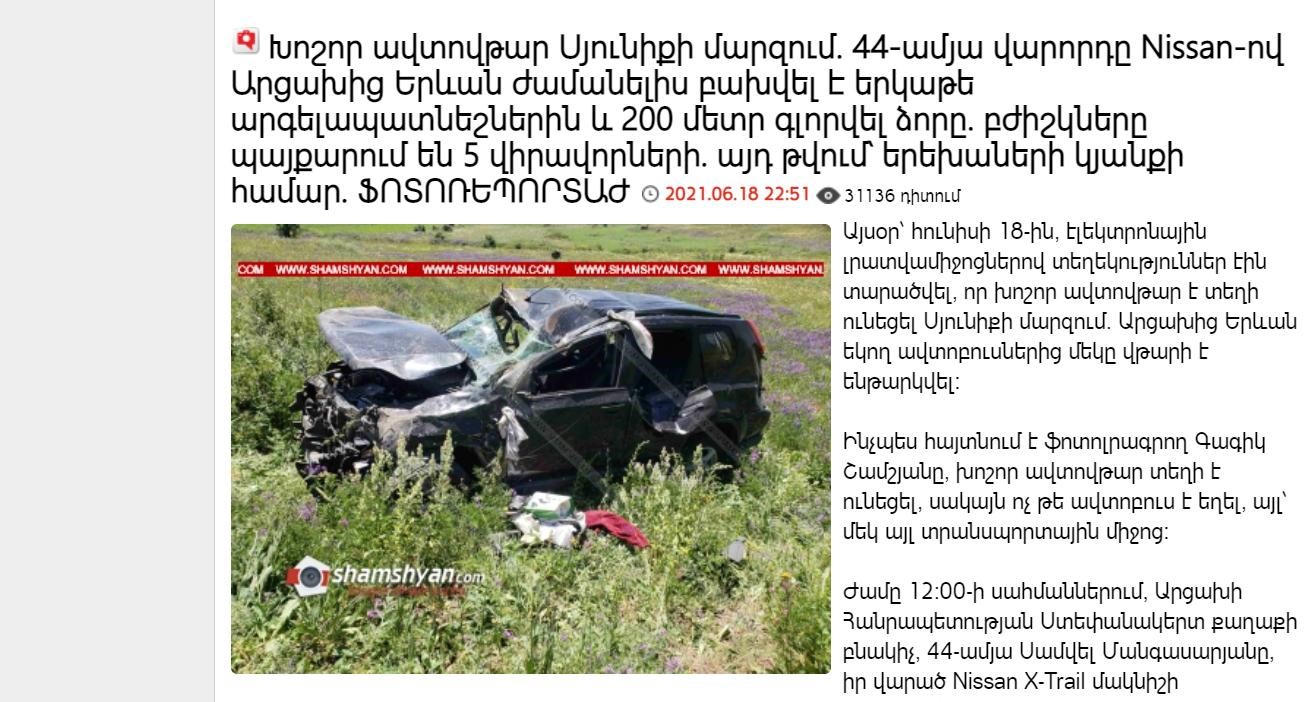 Shamshyan.com reported that the serious car crash had taken place on June 18; this website also said that it was not a bus accident. “At around 12:00, a citizen of Stepanakert, Nagorno-Karabakh – 44-year-old Samvel Mangasaryan, with his Nissan X-Trail, on the Yerevan-Meghri road, has, in yet unknown circumstances, left the traffic lane, crashed with the reinforced concrete banisters, and rolled down the gorge for about 200 meters.”

The website Shamshyan.com, just as Vardan Balyan, reported that the driver is seriously injured: “S. Mangasaryan is in an extremely severe condition, and the rest [of the passengers] are still in a severe, but in a more stable state.”