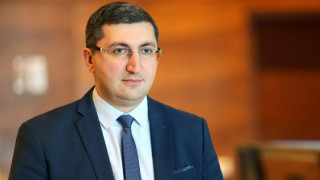 “The budget expenses incurred in April were without particular deviations. There was a large nominal payment because of debt servicing.”

Giorgi Kakauridze: “The budget expenses incurred in April were without particular deviations. There was a large nominal payment because of debt servicing.”

Georgia’s economic growth in April 2021 was 44.8% which gave rise to certain questions from the public. In particular, the factors stipulating the much larger than expected economic growth are vague. There is an opinion that such a growth of the economy could have been caused by a sharp growth in the spending part of the budget. The statement of the Deputy Minister of Finance concerned this very issue. In particular, the volume of state budget expenditures has indeed increased sharply and accounted for 81% of the total expenditures in the first quarter of 2021. However, this was mostly stipulated by the repayment of USD 500 million in Eurobonds. With the exception of the repayment of obligations, budget expenditures in April were not much different from the figures of the previous months.

Budget expenditures have increased as compared to the previous years, owing to the ongoing pandemic. However, if this caused the sharp growth of the GDP in April 2021, then it should also have had the same effect in March 2021 since no significant easing of the economic restrictions happened in April in contrast to March. Further, budget spending which is intended to stimulate the economy to some extent in this period was also high in March. Therefore, the reasons behind the GDP growth in April have to be found elsewhere.

At the session of the Budget of the Finance Committee of the Parliament of Georgia, the Deputy Minister of Finance, Giorgi Kakauridze, stated: “The budget expenses incurred in April were without particular deviations. There was a large nominal payment because of debt servicing.” The statement was made in response to an assumption that the expected high economic growth rate in April was perhaps associated with a sharp increase in budget spending.

Naturally, some questions were raised from the public in regard to April’s economic growth data. High, double-digit growth in April was somewhat expected since the economy shrank by 16.6% in April 2020 as a result of stringent restrictions. However, the 44.8% economic growth rate in April means that the economy increased by 20.7% as compared to the same period of 2019. The March 2021 GDP increased by 1.2% as compared to the March 2019 GDP. There are questions in this regard since no major pandemic-related regulations were lifted in April 2021, as opposed to March, and the stringency index was kept at the same level.

In the first quarter (three months) of 2020, the factual amount of budget expenditures was nearly GEL 3.9 billion whilst in the first four months of 2021 it reached GEL 7.1 billion. Therefore, expenditures in April amounted to GEL 3.2 billion which is close to the total expenditures of the first three months combined. However, according to the Deputy Minister of Finance, 55% of these expenditures was spent in order to decrease foreign obligations. In particular, Georgia had to pay USD 500 million in Eurobonds in April which increased the one-off growth of the monthly expenditures. Without the debt repayment, the amount of April’s budget expenditures would have been GEL 1.4 billion and that would have been only 18% higher as compared to the average monthly figure of the first quarter of 2021. Therefore, this could not have been a determinative factor behind the larger than expected economic growth in April. 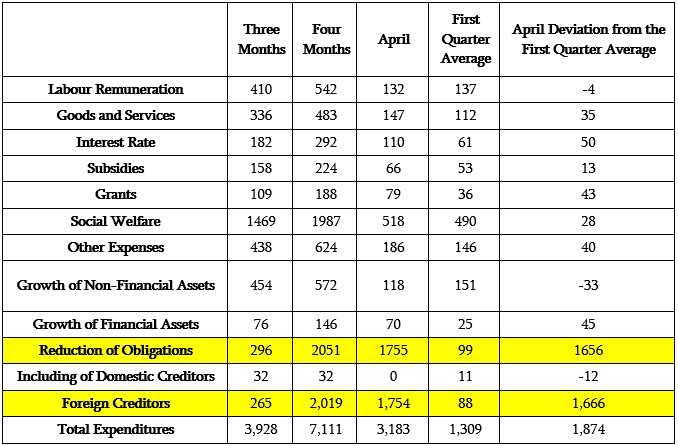