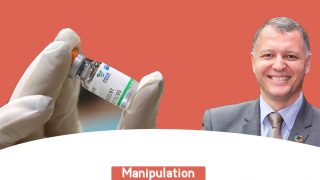 Giorgi Pkhakadze claims live on Facebook that the Chinese Sinopharm COVID-19 vaccine bought by Georgia is worthless and we know nothing about its ingredients.

Giorgi Pkhakadze claims live on Facebook that the Chinese Sinopharm COVID-19 vaccine bought by Georgia is worthless and we know nothing about its ingredients.

On 23 April 2021, Giorgi Pkhakadze stated through Facebook live that the Chinese Sinopharm vaccine bought by Georgia is worthless and we know nothing about its ingredients. As stated by Mr Pkhakadze, Sinopharm cannot offer protection against the British as well as other new COVID-19 variants. He further claimed that none of the vaccines works against the new [Indian, Brazilian and South African] COVID-19 variants.

Of note is that in his video address, Giorgi Pkhakadze initially says that we know nothing about Sinopharm whilst later contradicts his own claim and states that Sinopharm works against the Wuhan variant.

The claim that nobody knows the ingredients of the Sinopharm vaccine is not true. Sinopharm is an inactivated coronavirus vaccine created by the Beijing Institute of Biological Products (BIBP) in early 2020. The scientists selected three variants of the coronavirus from patients in Chinese hospitals and picked one of them because it was able to multiply quickly in monkey kidney cells. After selection and multiplication, the virus was inactivated with chemical compounds. The inactivated coronaviruses could no longer replicate, although their proteins, including the so-called spike protein, remain intact. The researchers mixed the inactivated viruses with a small amount of an aluminium-based compound – adjuvant which stimulates the immune system to boost immune response. Of note is that inactivated viruses have been used in vaccine production for over a century.

This is how Sinopharm works: It teaches the immune system to produce antibodies against the SARS-CoV-2 virus. The antibodies attach to viral proteins, specifically to the so-called spike proteins which cover the surface of the virus.

How Sinopharm Works against the British and Other Variants

According to the producer’s information, antibodies triggered from the Sinopharm vaccine have a “pretty good” neutralizing effect on the British and South African variants as well as on others. Lab testing was conducted for variants found in Brazil and Zimbabwe as well. Specific studies and data on Sinopharm’s efficacy against the British and other variants have not yet been published.

According to the producer’s data, based on the data from the third-phase trials which were conducted in ten countries, Sinopharm’s efficacy was 79.3% whilst the vaccine’s efficacy reached 86% according to the study carried out in the UAE. At time of Giorgi Pkhakadze’s live address, detailed data of Sinopharm’s COVID-19 vaccine (third-phase trials) were not yet publicly available. At that time, the Chinese vaccine producers Sinopharm and Sinovac had submitted their data on their respective COVID-19 vaccines to the World Health Organisation (WHO). As stated by the chair of the WHO’s advisory panel, these data attested the vaccine’s effectiveness which was in line with the WHO’s standards.

On 29 April 2021, the WHO’s strategic advisory group of experts (SAGE) on immunisation held a discussion on the Sinopharm and Sinovac vaccines. On 3 May 2021, the SAGE working group published an evidence assessment on the efficacy and the safety of Sinopharm. Experts stated with confidence that two doses of the aforementioned COVID-19 vaccine in the 18-59 age group are effective. They were moderately confident that the risk for serious adverse effects after vaccination is low.

Most of the post-vaccination side effects were mild or moderate with pain at the injection site, headache and fatigue being the most common. In addition, there were two cases of serious adverse effects (strong vomiting and the inflammatory demyelinating syndrome) which might have been caused by the vaccine. Of note is that serious allergic reaction (anaphylaxis) was not identified during the clinical trials.

Experts assess that the evidence on Sinopharm’s efficacy among the over 60 age group is not sufficient. In addition, there is an extreme paucity of evidence about the efficacy and the safety of Sinopharm’s vaccine for people with underlying health conditions.

The WHO’s group of experts concluded that further studies are needed in order to determine Sinopharm’s efficacy for other variants of concern.[1] . At the same time, it is expected that the vaccine will have some neutralising effect against other variants. According to the SAGE’s information published on 3 May 2021, a cross-neutralisation study suggested that there would be a neutralisation against the African variant (B.1.351), albeit with reduced efficacy. According to the same assessment, efficacy studies on other variants have not yet been carried out.

• I am telling you that none of the vaccines which are currently available, none of them can help us now. I will explain scientifically what happens. In regard to AstraZeneca: AstraZeneca and Johnson & Johnson failed in the whole world. Billions have been spent and these two vaccines are not good for certain reasons and I do not want to be very deep here.

• Where are we? We have got a Chinese virus. When the Chinese virus started to spread, Pfizer, AstraZeneca, Johnson & Johnson and Moderna were working and are working yes, against the Wuhan virus. Your vaccine, the Chinese and the Russian ones. All these vaccines work against the Wuhan virus. Approximately five or six months ago, new mutated variants started to emerge. One of the mutated variants originated in Britain. It is a little different and this Pfizer works against it but not very well. Although it works – OK, we have good news. AstraZeneca, too, with its advantages and disadvantages more or less also works. OK, let’s be calm now.

• The Chinese vaccine does not work against the British variant. On top of that, now a South African variant has emerged – the virus changed and a different variant started to spread and your AstraZeneca and your Pfizer and the rest of your vaccines do not work against that variant. And now we have a devastating outbreak in India. India’s virus is such that none of the vaccines works against it.

The claim that the AstraZeneca and the Johnson & Johnson vaccines are worthless and failed is a manipulation.

On 7 April 2021, the European Medicines Agency (EMA) found a possible link with the AstraZeneca vaccine (currently known as Vaxzevria) and very rare cases of adverse effects, although added that the overall benefits of the vaccine outweigh the potential risks. The statement also says that COVID-19 is associated with a risk of hospitalisation and death whilst the post-vaccination reported combination of blood clots and low blood platelets is very rare. Therefore, the overall benefits of the vaccine in preventing COVID-19 outweigh the risks of side effects. European countries, including Georgia, stopped administering AstraZeneca’s vaccine for people below the age of 55 as the cases of blood clots was mostly found among women under 60. However, according to the EMA’s reports, current evidence does not indicate that a particular sex or age group is a risk group for the aforementioned health complications. The risks of blood clots after vaccination is extremely low and stands at 0.0004%. The benefit of the vaccine is much higher as compared to potential harm. Of note is that Germany allowed administering AstraZeneca for all age groups and the vaccine is available for all adults (people over the age of 18). Georgia’s immunisation council decided to lower the AstraZeneca age group to 45 years.

Giorgi Pkhakadze’s claim that none of the COVID-19 vaccines works against other variants (Brazilian, South African and Indian] was unfounded and manipulative.

The preliminary research carried out in India indicated that the existing vaccines would work against the Indian variant of the coronavirus. According to the information of India’s Centre for Cellular and Molecular Biology (CCBM), preliminary study showed that both Covishield (AstraZeneca) and Covaxin (inactivated Indian vaccine) protect from the B.1.617 variant (double Indian mutation). Christian Drosten, the Head Virologist at Berlin's Charite Hospital, also stated that was no reason for alarm with the new Indian variant. In March 2021, Mr Drosten stated that the next generation of vaccines will only need “a slight update” to work against most of the coronavirus mutant variants. Scientists believe that the existing vaccines will help control the Indian coronavirus variant to prevent severe diseases. At that stage, it was unclear how effective the vaccines would be against the Indian variant of the coronavirus. Later on 23 May 2021, evidence confirmed that the Oxford/AstraZeneca and Pfizer vaccines were effective against the double Indian mutation. The effectiveness of the Pfizer vaccine with the Indian variant for a single dose is 33% and increases to 88% after two doses. In regard to the AstraZeneca vaccine, its efficacy for a single dose is also 33% and it reaches 60% for two doses.

On 1 April 2021, Pfizer and BioNTech stated that as a result of a COVID-19 vaccine study, their vaccine was 100% effective in preventing COVID-19 cases in South Africa where the B.1.351 variant is prevalent.

According to a study in Qatar, after observing 385,853 people, the efficacy of the Pfizer vaccine against the British variant (B.1.1.7) was 89.5% and 75% against the South African (B.1.351) mutation. The vaccine’s effectiveness against severe, critical, or fatal disease was at 97.4%.

According to the study published in New England Journal of Medicine, Pfizer’s COVID-19 vaccine was very effective against the more contagious variant first identified in Brazil.

The early results from lab studies show that antibodies made in response to the AstraZeneca vaccine are active, although slightly less effective against the Brazilian variant. Researchers are continuing to further study this issue.

On 20 May 2021, the WHO’s Regional Director for Europe, Hans Kluge, said: “All WHO-approved vaccines have proven effective against COVID-19 variants — including the mutation identified in India.” FactCheck would like to remind our readers that Pfizer, AstraZeneca, Moderna, Johnson & Johnson and Sinopharm have thus far been approved by the WHO.

Of note is that on 23 May 2021, Giorgi Pkhakadze himself published information that the most recent studies indicated that Pfizer and AstraZeneca are effective against the Indian variant. Therefore, his categorical claims on 23 April 2021 that COVID-19 vaccines were ineffective vis-à-vis the new variants indicate an inconsistent and manipulative nature of his statement.

Variant of Concern – Such a “variant of interest” of the virus for which there is evidence of it being more transmittable and causing a more severe disease (increased hospitalisations or deaths) as compared to the original variant or being non-responsive to the immunity generated by vaccines. The list of WHO-categorised “variants of concern” are as follows: the so-called British variant (B.1.1.7), the South African variant (B.1351), the Brazilian variant (P.1) and the Indian variant (B.1.617).