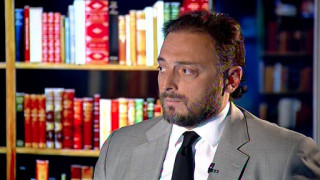 “Prior to gaining independence, less than 1% of the Georgian population lived under the poverty line.”

Levan Vasadze: “Prior to gaining independence, less than 1% of the Georgian population lived under the poverty line.”

Resume: Poverty is one of Georgia’s biggest challenges. In accordance with 2019’s data, 19.5% of the country’s population lives in absolute poverty. However, poverty has been a challenge not only for the last 30-year period. The claim that less than 1% of the Georgian people lived in poverty prior to gaining independence is false.

On 6 May 2021, on air on Ghamis Kurieri, businessman and the leader of the recently founded Unity, Essence, Hope movement, Levan Vasadze, spoke about the 30-year period of Georgia’s gaining independence to the present day. According to Mr Vasadze, less than 1% in Georgia used to live in poverty whilst this figure currently stands at 20%.

Since gaining independence, poverty has been one of Georgia’s biggest challenges. Of note is that the Soviet system plunged into a deep economic crisis in 1990 and so it is hard to imagine that poverty and inequality in the USSR were previously at very low levels.

According to the United Nations Development Programme 2009 report, poverty figures in the former USSR countries, including Georgia, were higher in the post-Soviet period as compared to Soviet times. In 1980-1990, 8-10% of the Georgian population lived in absolute poverty, meaning that their daily consumption was below 2.15 PPP dollars (considering purchasing power). The portion of the population whose daily consumption was below 4.30 PPP dollars fluctuated from 32% to 36%. In 2002, the extreme poverty figure reached 38% whilst general poverty rose to 76%.

Poverty in Georgia increased sharply in the 1990s which was directly stipulated by the war, losing territories and the deep economic crisis.

The COVID-19 pandemic and the stringent restrictions inflicted a heavy blow to the Georgian economy in 2020. Job and income losses amid the pandemic proved to be the most serious problem, leading to an impoverishment of the population. According to the World Bank’s data, national poverty in Georgia increased by 5.4 percentage points in 2020.

Graph 2: Share of the Population Under the Absolute Poverty Line (%)

The World Bank measures the poverty level by consumption expenditures. In particular, 1.90 PPP USD and 3.20 PPP USD per day serve as the poverty threshold. According to 2019’s data, the daily consumption of 3.8% of the Georgian population is under 1.90 PPP dollars which is 2.7 times less as compared to the 2002-2003 figure. In 2019, 4% of the population consumed less than 3.20 PPP dollars daily and this figure dropped nearly 2.5 times as compared to 2002-2003. In the course of 2002-2019, the highest figures of poverty were in 2010 owing to the post-war period and the world financial crisis. A poverty reduction trend has started since 2011. 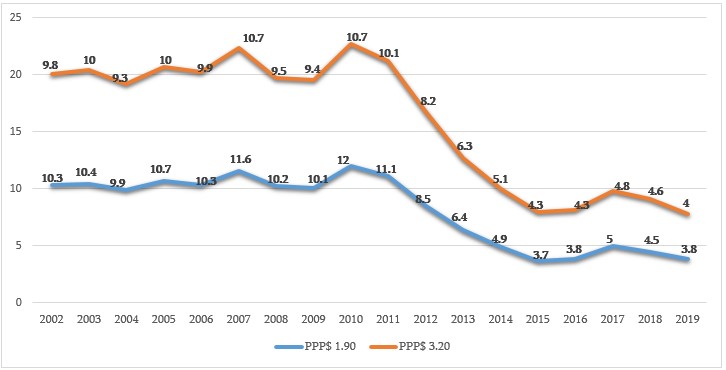 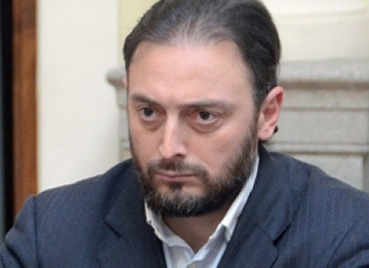