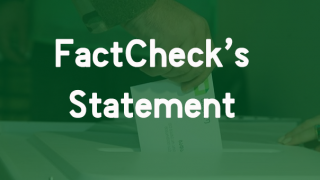 On 3 and 4 March 2021, the MP reached FactCheck through a public Facebook post and a private message asking to verify the information given in the table released by the European Georgia – Movement for Freedom political party. FactCheck had started on the verification of that information much earlier which is proven by FactCheck’s 4 February 2021 letter to the Central Election Commission (CEC) requesting information. Therefore, Shalva Papuashvili’s claim that FactCheck “took no notice” of the aforementioned information is false.

After one month on 4 March 2021 and in violation of the legally set timescale, the CEC responded to say that it does not normally calculate the figures given in the aforementioned table. In one further communication with Shalva Papuashvili, FactCheck informed him that the CEC declined to provide the requested data. FactCheck additionally clarified to the MP that some of the information (controlled votes) in the table as presented by European Georgia was not verifiable although FactCheck’s editorial board would make a hand recount of a part of it (empty envelopes and mismatches). In response to the MP’s suggestion to check the information with European Georgia, FactCheck responded that such information provided by the political party would not be sufficient evidence for FactCheck.

A hand recount of polling stations implies an analysis of over 3,500 precincts as well as twice as many protocols and corrections protocols. Therefore, such a data collection and analysis goes beyond FactCheck’s timeframe for standard article publication and requires much more resources from the editorial board.

Georgian political parties as well as the NGO sector and Georgia’s international partners made numerous statements in regard to the 2020 parliamentary elections. One of the election-related issues which sparked public discussion was about the gap between the ISFED’s PVT results and CEC returns. FactCheck devoted multiple articles to this issue. On 11 December 2020, the ISFED released a statement on the updates in PVT results (see here: https://bit.ly/2QVbpWr), saying that “a technical fault was identified in the vote calculation formula.” Based on the ISFED’s statement, FactCheck, as a responsible organisation, amended all of its articles using the ISFED’s PVT results and issued a special statement on this matter (see here: https://bit.ly/3xKB58E). FactCheck concluded that Shalva Papuashvili’s statement on the potential impact of the technical fault in the ISFED’s PVT process on the allocation of the seats in the Parliament of Georgia was TRUE (see here: https://bit.ly/3gRVdjk)

We would like to note that had our readers’ criticism in regard to FactCheck’s publication process timescale been legitimate, any attempt to politicise the issue and discredit the organisation by making the accusation that FactCheck deliberately protracted the article publication process would still be groundless. In addition, the dispute following the election process and the final results ushered a political crisis into the country which was not able to be solved even with the unprecedented massive international engagement. Against this backdrop, blaming FactCheck (which is not an election observer organisation) for not verifying the opposition party’s material vis-à-vis the election process and the results in a short period of time is irrational at the very least.

Georgia’s Reforms Associates (GRASS) was founded in 2012 and Sergi Kapanadze, together with Elene Khoshtaria, was among its founding members. The founding assembly also included nine other people. Information both about the founders as well as the current team is fully available to the public on the organisation’s website. In 2016 immediately after their decision to go into politics, Sergi Kapanadze and Elene Khoshtaria resigned from the organisation and have taken no part in its work since then. We believe the fact that Mr Kapanadze and Ms Khoshtaria were founders of the organisation and legally they still remain as founders constitutes a simple truth and warrants no further explanation

Shalva Papuashvili also wrote in his statement that he had been unable to find an article where FactCheck “exposes” Sergi Kapanadze or Elene Khoshtaria. The two examples to illustrate the fallaciousness of the MP’s claim are as follows:

1. Elene Khoshtaria founded a new political movement and FactCheck verified the facts in the presentation video clip. In total, seven claims were verified. Of these, one was a lie, one was a manipulation of facts, one was mostly false, one was half true and three were true (see here: https://bit.ly/3vyNFGj).

FactCheck’s independence, impartiality and transparency are attested by the IFCN (International Fact-Checking Network) conclusions. FactCheck.ge undergoes an annual audit by the IFCN’s independent experts and a verification of the organisation’s impartiality, including non-partisanship, is one of the criteria of the audit process.

It is unfortunate and perhaps shameful that the Georgian MP tries to blame FactCheck for promoting disinformation and discrediting the organisation which was one of the principal contributors to the Parliament of Georgia’s thematic inquiry process on disinformation and propaganda in 2019. Shalva Papuashvili’s statement indicates that he is interested in fighting against election-related disinformation. We urge him to consult Strengthening State Policy to Address Anti-Western Disinformation and Propaganda in Georgia and take interest in the implementation of the recommendations detailed in this report. The report was prepared with the financial support of the United States Agency for International Development (USAID) and the Westminster Foundation for Democracy (WFD).

It is most disgraceful that the MP, who is obliged to have cooperation with civil society, employs a well-known propaganda trick and cynically refers to the financial assistance provided by donor organisations, including the USAID, as “gifted money” which is spent for shaping a partisan agenda. This is in light of Shalva Papuashvili’s biography and his own track-record of cooperation with NGOs.

In September 2020, FactCheck was selected as Facebook’s fact-checking partner platform in the fight against disinformation through the social network given our unswerving commitment and our abiding to the IFCN’s principles and media standards. FactCheck marked millions of links containing false information, including those pertaining to the elections, as fake news and curbed their dissemination, thereby limiting their malign influence on the public. Fighting disinformation amid the pandemic has been particularly vital and FactCheck is proud to be at the frontlines of fight against disinformation concerning the coronavirus and the COVID-19 vaccines.

Finally, FactCheck always stands ready to provide comprehensive information about the organisation’s work to any interested party as well as details about the principles, methodology and editorial code which FactCheck uses for guidance.