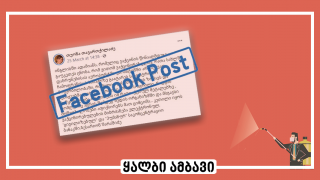 Disinformation: The COVID-19 vaccines contain radioactive metals which can be identified by temperature measuring (controlling) devices.

Disinformation: The COVID-19 vaccines contain radioactive metals which can be identified by temperature measuring (controlling) devices.

The information that the COVID-19 vaccines contain heavy metals which act like nanochips is actively circulating through social media. On 25 March 2021, Teona Tavartkiladze, a Facebook user, made a publication on her personal account which contained similar disinformation. As claimed by Ms Tavartkiladze, radioactive metals end up in the body of vaccinated people and they can be identified by temperature sensors.

“A person who is against the vaccines was given a fabricated certificate in England, ostensibly proving him vaccinated to avoid being quarantined in the airport on his return home. After arrival, he went through the control sensor which measures temperature and customs officers told him that he is not vaccinated since the device responds to those radioactive metals which are injected into the body after vaccination and these devices identify them by flickering… Welcome all of you who are vaccinated into an electronic, ‘civilized’ and ‘humane’ concentration camp.”

Similar disinformation was also disseminated through the internet in Russian. On 25 March 2021, Davit Giorgobiani published it on his personal account. This information is fake.

“How it is exposed in the airport whether or not you are vaccinated?

Good evening everyone! Today, I talked with an acquaintance who took a flight from England. His mother works as a nurse in a hospital in England and they vaccinate people there at full speed. He is against vaccines and his mother made him a fake certificate that he received his shot; that is, he was issued a real document but he did not actually get injected with the vaccine. Upon his arrival in his own country’s airport, he showed the document in order to avoid being quarantined. The customs officers asked him to go through the device which in all airports now shows body temperature. He went through it and was told that he is not vaccinated and his certificate is invalid since the vaccine contains heavy metals and they immediately see whether or not a person is actually vaccinated. And after all these, how can one possibly not believe in global control and a conspiracy theory!

The information promoted through social networks contains a story that the border guards in an airport were checking people with a temperature sensor in order to determine whether or not they were vaccinated. According to the information, the device also identifies the presence of heavy metals in the body which are introduced as a result of vaccination.

The claim on the presence of heavy metals in the COVID-19 vaccines is not true. The metal which some of the COVID-19 vaccines contain is aluminium or, more precisely, aluminium salts. Aluminium salts are used as adjuvants which are substances that increase immune response [an adjuvant is a substance that augments antigen immunogenicity or prolongs the effect of medicines. Some adjuvants are used to produce vaccines (aluminium hydroxide, aluminium phosphate, adrenomimetic means, etc.)]. As stated by the US Centre for Disease Control and Prevention (CDC), without the use of aluminium it would be necessary to produce a larger number of vaccine doses. Vaccines contain a safe portion of aluminium.

Of note is that aluminium is one of the most widespread substances on Earth. It is found in food, water and air. For instance, in the first six months of life, an infant gets around seven milligrams of aluminium in his mother’s milk. In the same period, the vaccines which are administered to the infant contain 4.4 milligrams of aluminium. The WHO’s Global Advisory Committee on Vaccine Safety concluded that the aluminium adjuvants pose no health risks. The WHO’s special committee ruled that there is no need to remove aluminium salts from the vaccines.

Aluminium is not among the list of ingredients used to produce the COVID-19 vaccines approved for the USA such as Pfizer, Moderna and Johnson & Johnson. Experts have declared multiple times that there is no aluminium or/and mercury in the ingredients of Pfizer and Moderna’s vaccines. Oxford/AstraZeneca’s vaccine also does not contain aluminium.

The CoronaVac and Sinopharm COVID-19 vaccines produced by the Chinese Sinovac do contain aluminium hydroxide (aluminium salt). However, as mentioned earlier, the presence of aluminium in the vaccine does not pose a health hazard.

The aforementioned Facebook publications did not specify precisely which “heavy metals” the COVID-19 vaccines contain. Another substance which is found in some of the vaccines is thimerosal. Thimerosal is a mercury-based preservative which is rapidly driven out from the body. There are two types of mercury which can affect humans – methyl mercury and ethyl mercury. The former is a toxic and dangerous substance and is not used in the vaccines. Ethyl mercury, which does not get accumulated in the body and poses no health risks, is used in the vaccine.

The Pfizer/BioNTech, Moderna and AstraZeneca vaccines do not contain thimerosal.

Therefore, the claim that the COVID-19 vaccines contain heavy metals which can be identified by temperature sensors is untrue and serves as disinformation.