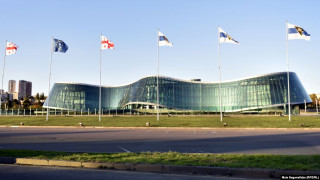 Police Used Proportional Force, Envisioned by the Law, to Carry Out Duties Assigned

Verdict: FactCheck concludes that the statement of the Ministry of Internal Affairs is a LIE.

Ministry of Internal Affairs:“Police used proportional force, envisioned by the law, to carry out duties assigned.”

Verdict: FactCheck concludes that the statement of the Ministry of Internal Affairs is aLIE.

On 23 February 2021, police and a special task group raided the United National Movement head office anddetained Nika Melia, the party’s chairman. Media footage shows that law enforcers entered the premises using special equipment. The riot police used pepper spray indoors whilst attempting to detain Nika Melia. One of the activists sustained a headinjuryand 17 other people wereinjured as a result of the raid with two of them being hospitalised. In addition, some office hardware in the UNM head office was destroyed.

The Ministry of Internal Affairs released a statement in regard to the operation. According to the statement, “the law enforcers warned the citizens gathered in front and inside of the office of the United National Movement not to obstruct the representatives of the police in the execution of the court decision and gave reasonable time to leave. Despite numerous warnings from the side of the ministry on the spot, the demonstrators gathered at the party office did not obey the lawful request of the police and showed resistance to the law enforcement officers. Thus, the police applied coercive measures and special means provided by the law in order to enforce their official duties entrusted to the Ministry of Internal Affairs by the court.”

The Public Defender of Georgia, Nino Lomjaria, responded to the raid at the UNM head office. Speaking with journalists, Ms Lomjariastated: “According to standards of any international organisations, whether these are standards of the UN, the High Commissioner for Human Rights, the Committee of the Prevention of Torture, the European Court of Human Rights or the UN Special Rapporteur, using pepper spray and tear gas indoors where people are deprived of the possibility to leave the territory and receive immediate medical assistance equals inhumane treatment and even torture because gas-induced pain indoors equals and resembles forms of torture and inhumane treatment. In 2014, the Committee of the Prevention of Torture gave a directrecommendation to Georgia that pepper spray should not be used indoors. This what I am talking about. These are the standards I have mentioned. According to human rights standards, it is not allowed to use pepper spray and tear gas in places where air passage is blocked and people cannot immediately go outside… It is particularly forbidden to use gas against those people, to injure those people, who pose no danger to the police and I know there were peaceful citizens there. I am also aware that media workers were also injured.”

Together with the Public Defender, NGOs also responded to the MIA’s raid. The Human Rights Education and Monitoring Centre (EMC) released the followingstatement: “Manners and forms of detaining Nika Melia through storming and a massive raid, including the use of tear gas and pepper spray indoors against peaceful citizens as well as the arbitrary detention of some activists, warrants multifaceted legal criticism. Questions are raised in regard to the legal grounds of seizing a computer server. In sum, the general political and geopolitical context of this case raises very serious questions in regard to the political objectives and the aspirations of the authorities. Certainly, under these conditions, there is a fear that the authorities will normalise this repressive practice and the state of democracy and human rights in the country will further aggravate. In light of the grave economic and social crisis, steering political processes in this direction sparks social worries on top of democratic worries and worsens general backdrop of desperation.”

Given all of the aforementioned we may conclude that the MIA used disproportionate force during the raid. The Public Defender and NGOs note that using pepper spray indoors is inadmissible. According to the ECHR, using pepper spray indoors equals inhumane and degrading treatment. Injured people and a destroyed infrastructure also attest to the police’s use of excessive force. Of additional note is that people did not offer resistance to law enforcement during the raid, barring a few exceptions. Therefore, the MIA’s statement that the police used proportionate force is a LIE.