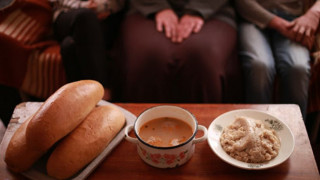 Irakli Abesadze: “Beneficiaries are still being fed for GEL 1.3 at soup kitchens.”

Resume: In accordance with the 2021 Tbilisi draft budget, GEL 18,475,000 is allocated for soup kitchens. The total amount of beneficiaries of soup kitchens, registered in all ten municipalities of the capital city, constitutes 38,914. Therefore, according to the draft budget, GEL 1.3 is allocated for daily meals per one beneficiary. This year’s budget also allocated the same amount of money for feeding one beneficiary of a soup kitchen. However, of note is that the inflation rate on food products as of October 2020 was 5.5% higher as compared to the previous year. Prices on products which make up the soup kitchen’s menu have increased significantly. Therefore, serving beneficiaries with the same menu in the next year will be extremely difficult.

European Georgia - Movement for Freedom member, Irakli Abesadze, posted the following statement on his Facebook account in regard to feeding soup kitchen beneficiaries: “Beneficiaries are still being fed for GEL 1.3 at soup kitchens.”

There are 62 active soup kitchens in ten districts of Tbilisi. Soup kitchen beneficiaries can be served once per day.

Tbilisi Mayor’s decree #2344 issued on 26 November 2014 sets the rules for registering and serving soup kitchen beneficiaries. According to the decree, only those socially vulnerable individuals with rating points under 200,000 will be allowed to be registered as soup kitchen beneficiaries. In addition, a beneficiary may be registered following the motivated reasoning of a head of municipality in exceptional circumstances. In regard to the sequence of adding beneficiaries into the list, it is regulated by the date of submitting the application. Priority is given to that applicant who registered earlier at the municipal authority. At the first stage, applicant is added to an additional list whilst the main list is replenished from the additional list. The number of beneficiaries of the additional list should not exceed 5% of the main list. 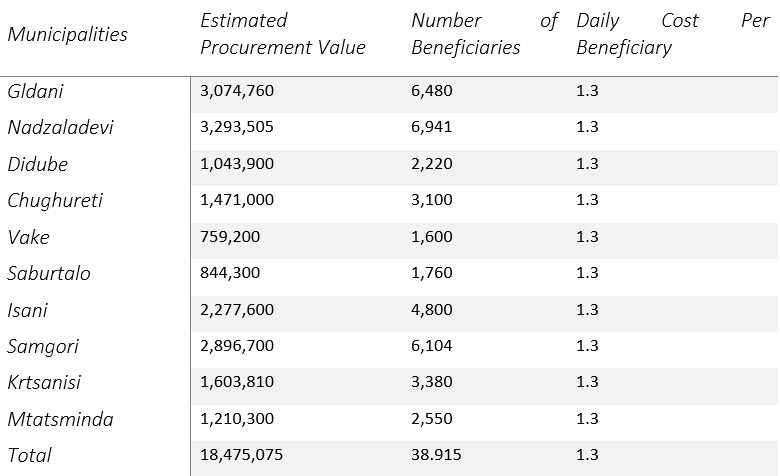 According to the Tbilisi budget’s explanatory note, the purpose of the soup kitchen programme is to provide hot meals to those residents of the capital city who suffer from extreme poverty. The soup kitchen menu is based on the calories required to sustain human life. The daily ration (menu) contains such macronutrients (carbohydrates, proteins, fats, etc.) which are vital for human health and full-fledged functionality. The soup kitchen meal is prepared by advance drawn up menu. It includes hot soup, a side dish, compote and bread. Types of soup and side dishes changes daily. The menu includes sour milk soup, pot-baked beans, vegetarian borshch, soup with meatballs, chicken broth, etc., consecutively (see detailed menu here).

GEL 1.3 daily has indeed been allocated for serving one soup kitchen beneficiary for the next year. Of note is that soup kitchen ration mostly comprise products whose prices have been hiked as compared to the previous year (given the existing circumstances, a further hike is expected). In light of such inflation, offering the same menu for one beneficiary in this year’s prices (GEL 1.3 which is envisioned by 2021 draft budget) will probably be extremely difficult.

FactCheck had already completed working on this article when the Mayor of Tbilisi, Kakhi Kaladze, stated that in case the 2021 budget appropriations for the soup kitchen beneficiaries are insufficient, Tbilisi City Hall will increase the funding. In addition, pursuant to the decision of the Mayor of Tbilisi, 3,500 individuals currently on the additional list will be added to the number of soup kitchen beneficiaries immediately without waiting.