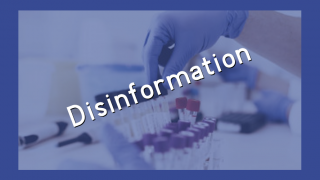 Manipulative information on COVID-19 diagnostics is circulated through social networks all across the world.

Fact checking organisations concluded that information in social media on COVID-19 test kits potentially damaging the brain or/and causing infections is fake news (see link 1, link 2 and link 3). Of note is that Facebook has already underlined that the aforementioned content is a lie.

Disinformation on coronavirus testing was also promoted in Georgia. According to the disinformation, the brain’s cerebral cortex becomes damaged during PCR testing. The disinformation promoters call on people to refuse PCR testing – “During a test, a swab is inserted until it reaches the brain wall and apart from being extremely painful, it is extremely dangerous as well” and “A virus-infected swab reaches the brain layer and causes encephalitis which in turn causes meningitis” (see link 1, link 2 and link 3).

COVID-19 is caused by the novel coronavirus. COVID-19 diagnostics are conducted by the polymerasic chain reaction (PCR) method or/and a rapid test by determining SARS-COV-2 antigens or antibodies.

The antigen-based rapid test identifies SARS-COV-2 antigens from a nasal swab collected from the upper respiratory track. Rapid antibody tests identify SARS-COV-2 antibodies in the blood. Antibodies make their appearance in the immune system after nearly five days from showing symptoms. Therefore, antibodies are not detected at the initial phase of the infection.

Currently, the PCR method is considered to be the golden standard of COVID-19 laboratory diagnostics. The PCR method (polymerasic chain reaction) detects SARC-COV-2 RNA in a nasopharyngeal swab. The testing material should be collected from both the upper and lower respiratory tracks. PCR diagnostics are only possible in high-tech laboratories.

Of note is that collecting material from respiratory tracts for PCR in the case of COVID-19 is based on the similar principle as in the case of diagnostics of other viruses. Science uses the PCR method for highly accurate diagnostics of a number of infections based on the study of genetic material (DNA and RNA). Kary Mullis, an American scientist, was credited for inventing the PCR reaction technique in 1983 for which he was awarded the Nobel prize in Chemistry.

The swab which is used to collect material from the upper respiratory tract is completely safe and it accessing the brain is a physical impossibility. Therefore, the claim that the brain becomes damaged whilst collecting material from respiratory tracts for PCR testing or/and the idea that this causes any other disease completely lack scientific argumentation and do not correspond to the truth.