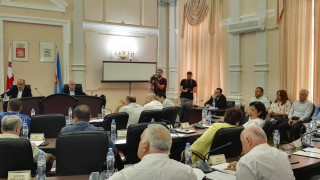 As a result of the novel coronavirus pandemic, certain economic activities have been suspended pursuant to ordinance N181 of the Government of Georgia. This slowed down the economic process which caused a decrease of incomes collected from taxes and levies. This was also reflected in the revenues of the Batumi Municipality budget. Low economic activity stipulates a decrease in incomes which are to be collected in the future.

The table shows that the decrease in the income component and, therefore, also in the expenses component is planned at GEL 26,625,600. The decrease in the part of incomes is mostly caused by a drop in tax revenues (property tax and value added tax) by GEL 11,586,200 as well as a GEL 24,359,100 decrease in other incomes. In regard to grants, the estimated volume of this component has been increased by GEL 12,319,730.

Funding for municipal infrastructure development increases by GEL 4 million. As a result of cutting expenses for certain sub-programmes, several new infrastructural projects appeared in the budget. In total, the local self-government plans to spend GEL 83,239,000.

In exchange, education funds have been cut. In particular, funding for pre-school development and education as well as vocational development and higher education support sub-programmes was decreased. However, funds allocated for wages of employees, including those working in the administration, were not subject to cuts.

In addition, it is planned to spend much less on programmes such as culture, youth support and sport. Sport development support and funds for cultural events and festivities have the biggest cut in funding - GEL 1,300,000 and GEL 1,163,000, respectively. These cuts were stipulated by pandemic-induced regulations and bans. Funding allocated for cultural-educational activities and the protection and development of cultural heritage as well as youth development support sub-programmes was also cut.

However, the opposition was most dissatisfied by cuts in spending on healthcare and social security programmes. In particular, funds allocated for healthcare decreased by GEL 329,300 and funds for social security sub-programmes were cut by GEL 1,107,400.

Over GEL 1 million was cut from Batumi’s economic and urban development programme. In particular, cuts were made in funding for the urban planning documentation sub-programme. FactCheck would like to remind our readers that Batumi’s chaotic urban development has been subjected to criticism from some Batumi residents, the third sector and the media multiple times whilst the lack of respective documentation is often named as the reason for this. At the same time, funding for the ecological improvement and recreational infrastructure development programme increased by GEL 606,300. Of this amount, GEL 490,000 will be added to the funds for the labour remuneration of employees. Of note is that the number of employees remains intact.

Table 2: Changes in Funding for Programmes and Sub-programmes in the Batumi Municipality 2020 Budget

As we see, funding for the executive and representative bodies is cut most heavily in the spending component. However, this is caused by cuts in funding allocated for debt services and payments. As the budget amendments’ explanatory note reads, the Batumi Municipality addressed the Government of Georgia to extend the debt service time (to distribute payments for 2020 over the next two years) without incurring penalties and obtained the government’s assent. Therefore, as mentioned previously, Batumi Municipality expenses decreased by GEL 24,646,300. Other the expenses for programmes and sub-programmes also decreased by nearly GEL 2 million whilst funding for several sub-programmes was revoked altogether. For instance, funding lung cancer screening, care for beneficiaries deprived of custody as well as care for individuals in need of care/hospice care at home will be ceased.

Sub-programmes for the retraining of personal assistants for people with disabilities, learning of sign language for family members of children with hearing impairment and personal assistants providing services to people with disabilities were also removed from the 2020 budget. In addition, funding for the Bartskhana Bridge rehabilitation work – nearly GEL 1,300,000 – was also withdrawn. The bridge has been badly damaged and people have been asking to repair it for years.

For further information, the 2020 budget of the Ajara Autonomous Republic allocated GEL 10,300,000 to the Batumi Municipality to carry out provisional projects envisioned by the municipality’s budget as well as for the funding of several new projects. The Batumi Municipality received a special transfer from the state budget as a grant in the amount of GEL 2,019,730.