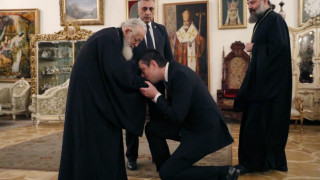 Relations between the Government and the Patriarchate Might Imperil Human Health

Human health vs What the Patriarchate will say

On 21 March 2020, the President of Georgia, Salome Zurabishvili, signed a decree to declare a month-long nationwide state of emergency in Georgia to reduce threats coming from the novel coronavirus (COVID-19) and for the better management of the crisis situation. The Constitution of Georgia as well as international legislations do not allow for the restriction of the freedom of belief and religion by the President’s decree during a state of emergency.[1] In a critical situation, the state can restrict only the outer dimension of the freedoms of belief and religion.[2] This restriction requires an independent normative act which the authorities have not yet adopted. Therefore, the restriction of the freedom of assembly as envisioned by the President’s decree does not apply to individuals taking part in public worship (see FactCheck’s article for more details).

On 30 March 2020, as a result of the deteriorating epidemiological situation, the Government of Georgia decided to further tighten the restrictions. For the duration of the state of emergency a curfew was imposed. The curfew is in effect from 21:00 until 06:00 and in this period of time the movement of pedestrians and transport is prohibited throughout the country. In addition, the gathering of more than three people in public areas was also prohibited.

In light of the restrictions imposed under the state of emergency and the epidemiological situation in the country, the issue of the Easter liturgy has become a matter of debates. Of note is that until recently, the authorities did not have a clear position on this issue. According to their statement, this matter was a subject of discussion for the Georgian Patriarchate and a final decision would be unveiled after reaching an agreement with the latter.

On 15 April 2020, the Government of Georgia and the Patriarchate decided that in spite of the state of emergency and curfew, the Easter service would still be held in churches with parishioners. This information was announced by the spokesperson of the Patriarchate, Andria Jaghmaidze, and the spokesperson of the Georgian Prime Minister, Irakli Chikovani. As stated by Archpriest Jaghmaidze, larger churches would observe the two-metre distancing whilst parishioners in smaller churches will be distributed within the church yards. The Patriarchate also found a “smart” way to formally observe the restrictions under curfew but effectively ignore them and, thereby, they completely neglected the measures which had been taken to protect public health. It is possible to say that Andria Jaghmaidze called upon believers to find ways for evading the rules. As stated by the Archpriest, parishioners may come to the churches before the curfew (21:00) and leave churches after 06:00 in the morning.

The position of Georgian authorities paved the way for the clergy to ignore the country’s laws in such a manner. On 9 April 2020, the Minister of Internal Affairs of Georgia, Vakhtang Gomelauri, replied vaguely (at the very least) to a journalist’s question about whether or not parishioners would violate the curfew during the Easter services if they go to churches before 21:00 and stay there until 06:00 in the morning. The Minister answered with a question: “If that is the case that parishioners will enter churches and not leave until 06:00, do you think that would constitute a violation?”

As stated by the spokesperson of the Georgian Prime Minister, the police would be deployed near churches. The church calls upon the elderly, children and people from risk-groups and with diseases or other symptoms to take all of the recommendations of the Ministry of Health and the National Centre for Disease Control and Public Health (NCDC) into account.

Georgia’s legislative and executive authorities said that the decision of the Government of Georgia and the Patriarchate was a “golden mean.” As stated by the Minister of Defence, Irakli Gharibashvili, for him as a practicing Christian, it was unimaginable not to celebrate Easter. Mr Gharibashvili added: “This decision of the Patriarchate is indeed a golden mean.”[3]

It is unjustified to allow public gatherings in a country when it enters the most acute phase of an epidemic. All restrictions imposed under the state of emergency aim to isolate people and cut contacts between them as much as possible in order to prevent an epidemic outburst, an overload of the healthcare sector and a drastic increase in the mortality rate. In this light, allowing parishioners to take part in worship, on the one hand, discredits all of the other restrictions and puts their results into grievous danger. On other hand, it increases public distrust towards the rule of law and equality before the law and erodes them. The actions undertaken by the authorities make us think that despite the epidemic threats, in this particular case, the Georgian Dream government’s actions indicate that it acts as a political party in a campaign period which prioritises keeping the favour of one of the most influential institutions – the Georgian Orthodox Church.

As mentioned previously, restrictions under the state of emergency do not apply to religious facilities. In accordance with Article 16 of the Constitution of Georgia, the freedom of the manifestation of belief and religion may be restricted only in accordance with the law for ensuring public safety or for protecting the health or the rights of others insofar as is necessary in a democratic society. The Constitution of Georgia also allows the government to temporarily suspend the gathering of parishioners in churches in order to prevent fatal outcomes of epidemics. However, the authorities have not used the aforementioned legal leverage thus far. This decision ignores the aim of the restrictions imposed by the law and confined itself by legal formal boundaries alone. The government’s inconsistence is further attested to by their decision to allow parishioners to attend the Easter liturgy, on the one hand, and to call upon them to stay at home, on the other. The Georgian Prime Minister, Giorgi Gakharia, stated: “The law will not be broken in any case. This will be called on both by the government and the Church and I, for myself, will say that churches will not be closed, especially on Easter night. Here, my and our main ally is a citizen. This is a citizen who is rational and is aware that he has to take responsibility for himself and should not hold everyone else responsible for himself and his health.” With this statement, the ruling team seeks to counterbalance their inconsistence by delegating complete responsibility to the people.

Of additional note is that given the expected overcrowding in churches, it is less likely that parishioners will observe the two metres of social distancing. As stated by the Director of the NCDC, Amiran Gamkrelidze, two-metre distancing in churches cannot be observed. Mr Gamkrelidze also added: “We do not know how many more are infected apart from this 336 (the number of infected people at the time of writing). There are unknown cases and unidentified persons who carry and spread the infection. There is a high risk of contagion in the churches these days.”

In accordance with the decision of the Government of Georgia, it is completely banned to use personal vehicles from 17 to 21 April. As stated by the Minister of Health, Ekaterine Tikaradze, “this restriction is not related to going to churches.” Of note is that the Georgian Patriarchate declared that the aforementioned prohibition does not apply to the clergy, choir singers and altar boys. In addition, with banning the movement by cars, visiting cemeteries was also prohibited for ten days. Furthermore, wearing face masks in closed public spaces became mandatory. The timing and the nature of the tightened restrictions clearly indicate that the authorities indirectly seek to curb participation in Easter worship by the imposition of the additional restrictions. This makes the decision of the ruling team even more ambiguous. The government imposed additional restrictions upon people instead of using legal mechanisms to ensure the holding of the Easter liturgy behind closed doors.

On top of the following social distancing rules, the issue of communion with a common spoon remains as a top controversy. During the outbreak of a viral infection, such as the coronavirus, which is transmitted via respiratory droplets, using common household items is a source of spreading the virus. The usage of a common spoon for communion goes against any hygienic standard and increases the risk of spreading the virus even further (see FactCheck’s article for more details). In spite of multiple pleas to change the common spoon rule during the communion, the Georgian Orthodox Church did not change the communion rule.

On 16 April 2020, the Minister of Health, Ekaterine Tikaradze, did not give a straightforward reply to a journalist’s question: “Does communion with a common spoon carry a risk in terms of spreading the COVID-10 pandemic?” Ms Tikaradze responded that his issue requires scientific research and at this stage she is unable to give a straightforward answer. Given the fact that healthcare workers tell people every day to refrain from using common items, process their groceries thermally and avoid close contacts, the Minister’s position may indicate the following - It is hard to imagine that the Minister of Health (whoever the Minister may be) is unaware about the risks of spreading the virus through this form of communion. Therefore, we may think that one of the aims of making a statement against human health is in the political interests of her party which proves once again that the government cares not about human health but what the Patriarchate will say.

As opposed to the Georgian Orthodox Church, most of the world’s Orthodox churches refused public services because of the coronavirus pandemic (see FactCheck’s article for more details). The Patriarch of Constantinople, Bartholomew, stated that churches are closed for the faithful and in order to protect everyone, this rule will be extended to the Easter week. As stated by the Patriarch of Constantinople, the strict measures taken in this critical phase of the pandemic do not harm belief and temporary restrictions were not imposed against the Church. Of additional note is that in regard to holding the Easter liturgy, opinions vary within the Patriarchate of the Georgian Orthodox Church as well. The Bishop of North America, Saba (Intskirveli), tells people to stay at home. The Metropolitan of Poti and Grigoleti also disagrees with the Patriarchate’s decision. As stated by Metropolitan Grigol: “In this situation, when every one of us is facing this danger, we should not be inattentive to the specialists of the field.” Some clergymen and theologians addressed parishioners with a joint statement. Thirteen clergymen stated that due to the difficult epidemiological situation, they are temporarily refusing to take active part in liturgical life.

Given the several cases when clergymen tested positive for the coronavirus it can be said that the authorities inadequately assessed the situation in regard to religious services. In spite of callings from the NCDC leadership and part of the public, the authorities opted for another way which increases the epidemiological danger in the country.

[1] Article 71 of the Constitution of Georgia defines the rights which can be restricted under the state of emergency by the President’s decree.

[2] The freedoms of belief and religion include two components; namely, inner and outer dimensions. Inner freedom is about the internal world of each individual. It lies beyond the scope of state jurisdiction and the state should not restrict it. The outer dimension is related to the freedom to express and manifest belief and faith.

[3] Similar statements were also made by the Head of the Defence and Security Committee of the Parliament of Georgia, Irakli Sesiashvili; Minister of Justice, Tea Tsulukiani; Minister of Health, Ekaterine Tikaradze, etc.