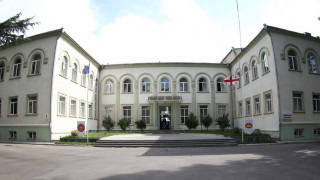 Gori Military Hospital, which has been declared as a quarantine zone, is ready to admit patients

Six new patients are currently tested in the hospital

One of the clinics which will admit patients with the coronavirus is the Gori Military Hospital. The hospital fully emptied isolated units several days ago. According to the information of the Director of the hospital, Davit Barliani, if necessary clinic will admit 40 infected patients. As clarified by Mr Barliani, the hospital also runs a quarantined space where a total of 115 individuals were registered in the period of 1-18 March. In the previous days, 25 patients were transferred to other quarantine spaces, including at a Gudauri mountain resort and ten patients were released and sent home. As a result, 55 persons currently remain in the hospital, including 14 military service members and 41 civilians. Of these civilians, four are foreign nationals and 37 are citizens of Georgia.

According to the information of the Director of the hospital, 31 tests were sent to the Lugar Laboratory during the quarantine period and all of the cases tested negative. Six new patients are currently being tested in the hospital. These patients were among 35 individuals who returned from abroad on 18 March. The hospital says that six of the aforementioned individuals have mild coronavirus symptoms and their test results will be available on 19 March.

As reported by the Gori Public Health Office, 57 persons are self-isolated across the Shida Kartli region (Gori, Kareli, Khashuri and Kaspi). Of them, three persons were forcibly taken to mandatory quarantine because of their violation of the self-isolation rules. The Gori Military Hospital was declared as a quarantine zone on 1 March following the recommendations of the Ministry of Health. From that period, the Ministry of Defence-owned medical facility ceased the admission of other patients. The patients who were receiving treatment in the hospital before were distributed to other clinics in the Shida Kartli region. As stated by Davit Barliani, the hospital is ready for any scenario, both in terms of infrastructure and healthcare workers which he argues is confirmed by the assessments of the World Health Organisation (WHO).

In his interview with FactCheck, Davit Barliani stated: “We can accommodate 140 patients without force majeure. There are two-to-three beds in one room but in the case of the virus, one patient has to be in one room. In this case, we will lose some area but it is possible to put groups together and observe. On 12-13 March, a WHO expert visited the hospital, inspected our work tactics and gave quite a high mark. We started re-training our workers when the first coronavirus case was reported in China.”

According to the protocol approved by the Ministry of Health, after a person is admitted to the hospital, anamnesis is collected and the risk-group is determined. Given the clinical symptoms, a patient is accommodated in a respective quarantine space where an epidemiologist makes the decision to collect a virus swab. A person spends 14 days in quarantine in an isolated room and is provided with food and necessary medicine.

If necessary, the hospital is ready to admit patients from Georgia’s occupied territories. The Government of Georgia has officially made this announcement. However, the Tskhinvali regime closed the crossing-points in response and declared that the entrance of people from Georgia posed a threat to the spread of the virus. The de-facto Minister of Foreign Affairs of the occupied Tskhinvali Region, Dimitri Medoev, stated: “All measures have been taken in South Ossetia to prevent the infiltration of the virus from Georgia.” Several days before this decision, the Red Cross transported one patient (without virus symptoms) from the Tskhinvali region to a Georgian clinic to receive medical treatment. According to the information of the Provisional Administration of South Ossetia, which functions on Georgian-controlled territory, 35 persons in total have come from the occupied Tskhinvali region to receive medical treatment as a part of the referral programme. Some of these people received treatment at the Gori Military Hospital. After the 2008 August war, patients of this category regularly go to the Gori Military Hospital.

As mentioned previously, the Gori Military Hospital has been declared as a quarantine zone since 1 March 2020 and has ceased the admission of other patients. Therefore, the number of healthcare workers employed at the hospital has also temporarily decreased. In total, 588 people are employed at the hospital and most of them are healthcare workers. Some of them are locals and some commute from Tbilisi to Gori. Those who were sent home were also promised to receive their salaries as usual; however, it is unknown how long will they remain in this situation. As clarified by Davit Barliani, this decision was stipulated by many different risks.

Mr Barliani also stated: “Since the hospital does not admit ambulatory and planned patients, only on duty personnel remain in the units. This, of course, does not concern the units where a quarantine zone is situated. There is a group of doctors and nurses on reserve. All who currently stays at their workplace are properly equipped and have been re-trained. In regard to the COVID-19 pandemic, competent state bodies provided trainings on this issue which were attended by the military hospital’s healthcare workers. Therefore, we currently do not see a risk in not being able to help the patients.”

Officially, the LEPL Giorgi Abramishvili Ministry of Defence Military Hospital is a multi-profile inpatient medical facility which is named after Doctor-Traumatologist Giorgi Abramishvili who was killed on the territory of the hospital during the 2008 August war. This was the only medical facility at the epicentre of the Russia-Georgia war 12 years ago when wounded and injured people received medical treatment.

The Gori Military Hospital was founded in 2006 on the basis of the respective decree of the then President of Georgia, Mikheil Saakashvili. Prior to that, it was the Gori District Hospital. Comprehensive and effective medical care for Georgian military service members, civilian employees of the Ministry of Defence, their family members and military pensioners was declared as the mission of the Gori Military Hospital.

Prior to declaration of the Gori Military Hospital as a quarantine zone, the facility used to admit civilians as well as military service members where they were able to receive emergency and planned medical treatment 24/7. Given the current circumstance, the clinic switched to a new, emergency mode of work.