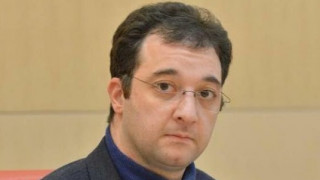 “Fewer people leave the country under the Georgian Dream government”

Resume:Chairman of the Committee of European Integration, compares migration figure to the period under the previous government and claims that there has been a decrease in migration. Comparison of external migration figures to those of prior to 2012 is not appropriate and does not reflect an objective reality, since external migration flows were not properly registered due to absence of the respective system.

Basic demographic figures have been re-calculated based on 2014 universal public census. The difference between the population number of 2002 adjusted data and 2014 universal census results was mostly distributed on migration, which sharply altered migration figures. The trend prior to 2012 – a net negative migration – is proved by different surveys, although data of the certain years remain controversial.

Chairman of the Committee of European Integration of the Parliament of Georgia, Davit Songhulashvili, posted the following statement on social media: “Migration of Georgian citizens peaked in 2010-2011. In 2010, there were 103,214 Georgians who left the country, whilst in 2011 that figure was 107,202. Under the Georgian Dream, there has never been a six-figure emigration. Today, when Georgian citizens are able to legally live in Europe for three months without visas, fewer people leave the country.”

In accordance with the data of the National Statistics Office Georgia, net external migration has been negative since 1994. This means more people leaving than coming to Georgia. However, comparison of external migration figures to the period prior to 2012 is inappropriate, since before 2012, external migration flows were not properly registered to due lack of the respective system. Until 2004, net migration was mostly calculated by the so called expert assessments. Since 2004, National Statistics Office of Georgia has had border crossing data, although it was not possible to identify immigrants and emigrants and the data included all the persons which entered or left the country’s territory. New methodology has been introduced from 2012 and it became possible to identify immigrants and emigrants.

Given the statistical discrepancies, it became necessary to re-calculate/update previous years’ data. In 2018, Georgia’s basic demographic data was changed significantly based on 2014 public census figures. 2002 universal public census results were revised and based on alternative data (including Integrated Household Survey) population shrank by nearly 8.7%, to 3.9 million. The difference between 2002 population’s adjusted figure and 2014 public census data, should be covered by natural increase (difference between birth rate and death rate) and net migration (difference between emigrants and immigrants) data. Natural increase figures have also been adjusted. The difference between 2002 adjusted figure and 2014 universal public census results were mostly distributed on migration. National Statistics Office of Georgia significantly altered existing net migration data. According to the previous data, net migration in-between the census periods were positive, whilst according to the updated data, migration data has been negative since 2002. Of note is that the highest positive net migration figures were registered in 2005 and 2009-2011, whilst according the updated data, these were the years with highest negative net migration figures (see graph 1). Only data prior to 2012, that is, the period when there was no accurate registration of migrants and emigrants were revised during the re-calculation (see FactCheck’s article on this topic).

It is not disputed that the number of population as a result of 2002 universal public census, was exaggerated as well as net migration between the census periods (2002-2014) was negative. However, certain periods’ migration figures do not reflect an objective reality but give artificial numbers instead, to make population figures in-between census periods technically congruent. Therefore, discussing the specific years’ migration figures from pre-2012 period, let alone their comparison with other periods is inappropriate and gives a distorted picture. 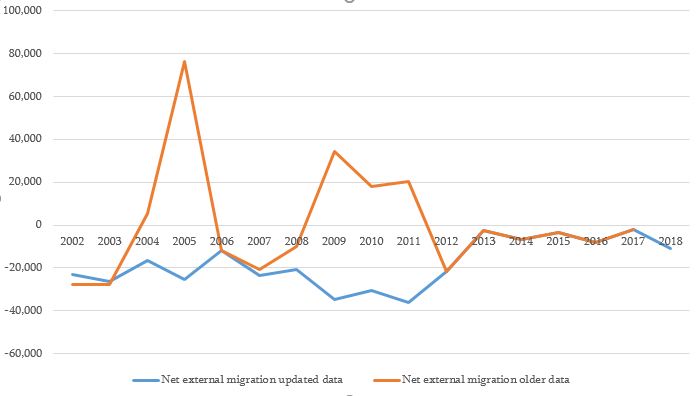 Of note is that the Chairman of the Committee of European Integration, whilst speaking on migration, makes a strong emphasis on migration of Georgian citizens. However, his statistical figures reflect general migration numbers, instead of migration of Georgian citizens alone. Of additional note is that prior to 2012, there has not been a statistical data on number of emigrants and immigrants based on their nationality.