In regard to the figures named by the Deputy Minister of Economy and Sustainable Development, Ekaterine Mikabadze, they are part of the property tax and profit tax share in an enterprise’s commercial profit which are used for Doing Business’s easiness of doing business ranking and do not show the real tax burden in the whole country. The income generated from the aforementioned two taxes constitutes only 11.2% of total tax incomes. Therefore, taking into account the context of the total tax burden and claiming that the tax burden has decreased based only on these two taxes is a manipulation of facts. In addition, the Deputy Minister names incorrect figures about the shares of property tax and profit tax in commercial profit.

European Georgia – Movement for Freedom MP, Giga Bokeria, and Deputy Minister of Economy and Sustainable Development, Ekaterine Mikabadze, had a dispute about the tax burden during the committee hearing (from 05:00). As stated by Giga Bokeria: “The tax burden has increased. It was 24.8% in 2013 and now it is 25.5%.” In response, Ekaterine Mikabadze stated: “The tax burden has decreased. It was 16% and after profit tax reform, it became 9%.”

In his statement, Giga Bokeria refers to the tax incomes to gross domestic product (GDP) ratio which is a measurement of the tax burden in a country. In particular, this figure shows the extent to which the government collects resources from the total economy through taxes. This figure implies income, consumption and property taxes. Currently, there are six taxes in Georgia. Of these taxes, income and profit taxes are applied to the incomes of individuals and legal entities whilst property tax is applied to the property of individuals/legal entities. In regard to indirect taxes, they are as follows: value added tax, import tax and excise tax. They are used to tax the consumption of goods and services and these taxes are reflected in the prices of goods and services.

Of the existing types of taxes, the bulk of tax incomes is generated from VAT and income tax. In 2018, tax incomes from these taxes are 10.7% and 7.8% of the GDP, respectively. In turn, among separate tax burdens, the profit tax burden had the biggest drop of 1.2 percentage points in 2018 as compared to 2013. This was stipulated by changes vis-à-vis taxable subjects enacted in 2017 (freeing reinvested income from taxes). In the same period (2013-2018), the excise tax income to GDP ratio increased by 0.8 of a percentage point with this growth starting in 2016 when the tax on excised goods was increased. In addition, the income tax to GDP ratio increased by 0.6 of a percentage point with the growth period coinciding with 2017-2018 even though the income tax rate did not change during that time. Therefore, growth is related to the size of the tax base.

Of additional note is the legislative change enacted in December 2012 which was adopted to annul the forthcoming cut to the income tax rate. In particular, prior to December 2012 the Tax Code of Georgia contained a passage which envisioned cutting the income tax rate from 20% to 18% between January 2013 and January 2014 and then further decreasing it to 15% from January 2014. However, upon the Georgian Dream’s coming to power, the passage was deleted and an “untaxed minimum” was introduced as an alternative which was in force between 2013-2014. Today, salaried income is still taxed at 20%.

The Deputy Minister of Economy and Sustainable Development responded that the tax burden had decreased. However, the Deputy Minister spoke not about the entire tax burden but about the Doing Business figure which is different to what Giga Bokeria was talking about. The Doing Business figure is an indicator of the taxes (direct taxes) to enterprise commercial income ratio where only profit and property taxes are included (the World Bank believes that direct taxes, which an enterprise or an employer has to pay directly, constitute a barrier to business when calculating the easiness of doing business rating). The reason behind this arrangement is that Doing Business measures the easiness of doing business and not the taxes in a country which, apart from enterprises, are also paid by the population. In turn, property tax and profit tax are 11.2% of total tax incomes whilst 88.8% is income collected by taxing incomes of individuals as well as their consumption. Therefore, given the context of the parliamentary debates, Ekaterine Mikabadze’s information about the share of property and profit taxes in an enterprise’s commercial profit and her assertion that the tax burden has decreased based on that figure is a manipulation of facts.

In addition to the fact that the indicator named by Ekaterine Mikabadze does not measure the total tax burden in the country and whilst it is incorrect to use them within this context, the Deputy Minister’s figures are mismatched to the actual numbers of the current share of property and profit taxes in the commercial profit of enterprises. In accordance with the Doing Business calculation in 2018, the share of property and profit tax in the commercial profit of enterprises is 9.9% whilst it was 16.4% in 2017.

Of further note is that by the share of paid direct taxes (in the case of Georgia, these are property tax and profit tax) in an enterprise’s commercial profit, Georgia ranks 3rd in the Doing Business rating whilst it is in the 16th position in terms of the paying taxes indicator. Georgia is 6th in the world in terms of the easiness of doing business ranking. 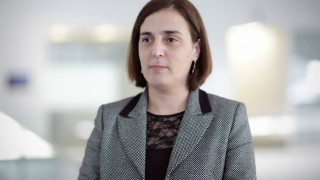