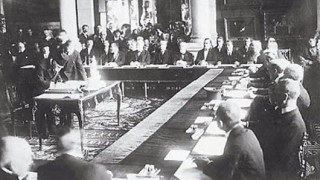 Myths and Reality about the Treaty of Kars

It needs to be underscored that there is no such article in the Treaty of Kars which would have stipulated holding a referendum in Ajara.

On 23 September 1921, negotiations started between the Ottoman Empire, Georgia, Armenia and Azerbaijan in the Turkish city of Kars. The Treaty of Kars was based on a principle similar to that of the Treaty of Moscow. In particular, Turkey’s north-east border remained untouched and it was drawn at the village of Sarpi.

The Treaty of Kars bears a peculiar nature. Most of the treaty’s articles are so-called dead articles because the signatories are the Soviet socialist countries of Georgia, Armenia and Azerbaijan which no longer exist in that form and status.

The first article of the treaty annulled all treaties concerning Transcaucasia. However, the article did not apply to the Russia-Turkey treaty signed on 16 March 1921. In line with Article 6, Turkey acceded to cede Batumi to Georgia, provided the Ajara population would be able to have a broad local autonomy status and the cultural and religious rights of every community would be protected. In addition, Turkey was granted the right to use Batumi port without paying a special tax. Of note is that the Treaty of Kars had no secret articles and it was concluded in five languages – Georgian, Russian, Turkish, Azerbaijani and Armenian.

The Treaty of Kars has resurfaced over certain periods of time and has been interpreted differently. The first talks about amending specific articles of the treaty started in 1925-1928. The aim of these talks was to take back the Artvin cooper mines which were transferred to Turkey under the Treaty of Kars.

For the second time, a campaign was launched in the Georgian press in 1945 to return ancient Georgian territories which had been appropriated by Turkey. The chief aim of the campaign was to annul the Treaty of Kars. In 1992, when the newly independent Georgia was seeking to settle interstate relations with neighbouring Turkey, the issue of the annulment of the Treaty of Kars surfaced again. The argument was that the Russian occupier government had concluded the treaty without the approval of the Georgian people. In addition, the issue was raised to strip Ajara of its autonomous republic status during the time of Zviad Gamsakhurdia who thought that the issue of autonomy, given its sensitive nature, needed a referendum among Ajara’s population. This caused demonstrations by Ajara’s population, organised by Aslan Abashidze, the Supreme Council Chairman of the Ajara Autonomous Republic, demanding to retain autonomy.

On 30 June 1992, Georgia and Turkey signed a bilateral framework treaty on Friendship, Cooperation and Good Neighbourly Relations between Georgia and Turkey. This framework treaty also mentions the Treaty of Kars as a part of the mutual recognition of the boundaries between the two countries whilst both parties “pledge to respect all mutual treaties and agreements starting from the Treaty of Kars on 13 October 1921” and “are guided by the fact that this treaty has ultimately determined the border between the two countries.”

Currently, pro-Russian forces in Georgia are instrumental in cultivating anti-Turkish propaganda. The Alliance of Patriots of Georgia is vocal in this regard and blames Turkey for the occupation of historic Georgian lands. In this context, the Treaty of Kars, which will soon have its 100th anniversary since its signing in 1921 and which is associated with a number of myths, is frequently mentioned. There are oft-repeated questions about the expiration date of the treaty: whether or not Turkey has the leverage to claim Ajara after the expiration of the treaty and there are questions about the abolition of Ajara’s autonomous republic status and whether or not the treaty contains an article which envisions a referendum for Muslims. This issue was one of the central campaign points of focus for the Alliance of Georgian Patriots which also connects the issue of a referendum to the growth in the number of Turks in Ajara, asserting that there are 40,000 Turks there who will soon demand a referendum for the secession of Ajara, ultimately resulting in its becoming a part of Turkey.

It needs to be underscored that there is no such article in the Treaty of Kars which would have enabled the holding of a referendum in Ajara. The only article which refers to the status of Ajara is Article 6 where Turkey ceded Batumi and its port as well as the entire Ajara with a guarantee of broad local autonomy. In Article 10, the treaty’s signatories agree to prevent the existence of any such organisations and groups on their territories which would claim governance or part of the territory of another state. In addition, there is no article which envisions holding a referendum by a particular religious denomination.

Pro-Russian parties in Georgia often bring up the fact that the Treaty of Kars has a date of expiration which ends on the 100th anniversary of its signing. However, it is unclear why 1921 is named as the date of the abolition of the treaty because there is no passage in the treaty itself about dates. Of note is that it is impossible to annul it unilaterally because Georgia, Armenia and Azerbaijan have the status of a single party and the agreement of all three countries will be required to annul the treaty. Of further note is that Armenia does not recognise the Treaty of Kars in regard to the part on boundaries. In 1992, Armenia refused to ratify the Treaty of Kars. However, the Treaty of Kars is of crucial importance for Azerbaijan because of Nakhichevan. In addition, there is no such passage which authorises Turkey to annex Ajara. On the contrary, with the Treaty of Kars, Turkey recognised Georgia’s sovereignty of Ajara which means that Turkey recognised Georgia’s full jurisdiction over Batumi and the Batumi district. The Constitution of Georgia (Section 3 of Article 3) determines the legal status of the Autonomous Republic of Ajara.

In regard to the number of Turks residing in Georgia, the data of the Ministry of Justice indicate that citizenship in exceptional circumstances was granted to 3,778 Turkish nationals between 1 January 2004 until 1 August 2018 which is much lower than the figure of 40,000 which was named. Therefore, neither the treaty’s expiration date nor the number of Ajara-based Turks can provide ground for holding a referendum. Most importantly, the issue of referendums is governed by the Constitution of Georgia. The Constitution determines the rule for holding a referendum as well as the legal nature of subsequent decisions. Based on this fact, public fear is illegitimate and groundless.

Arno Khidirbegishvili, Editor of Sakinform, one of the pro-Russian media outlets, published the following information: “In the case of installing a NATO military base in Batumi, Russia will no longer be a guarantor of the Treaty of Kars from 2021 and Batumi will be transferred to the Turks.”

Russia is not a guarantor of the Treaty of Kars because it is not a signatory party. In regard to building NATO military bases, this is possible only after Georgia’s joining NATO. However, military bases do not automatically appear after obtaining membership and this decision depends on a member country’s wish.

Apart from the aforementioned myths, pro-Russian media often circulates the statement of Turkish President Recep Tayyip Erdogan where he ostensibly demands joining Batumi to Turkey. Erdogan’s statement was about the cultural and historic ties in the region. The President of Turkey also clearly underscored in the same statement that Turkey respects the geographic boundaries of its neighbours but physical boundaries differ from emotional ones.

Currently, the Treaty of Kars is a document which is more historical in nature than a living document of potential legal consequences because all of the aforementioned principles of international law have been violated, let alone the fact that the signatories themselves – the Soviet socialist republics of Georgia, Armenia and Azerbaijan, no longer exist as Soviet socialist states and most of the articles are obsolete. In addition, the foundation of bilateral relations between Georgia and Turkey, including the recognition of the boundaries between them, is a bilateral framework agreement on Friendship, Cooperation and Good Neighbourly Relations between the Republic of Georgia and the Republic of Turkey signed in 1992. This treaty gave a substantially different direction to the aims and objectives of the Treaty of Kars and the obligatory nature of the treaty’s legal consequences is now governed in a different manner.

Of importance is that Turkey is the only neighbour country with whom Georgia delimited and demarcated a national border in 1992. This constitutes the determination of a borderline on the basis of an agreement (delimiting) between the states and fixing the boundary by special border signs (demarcation).

Under Russia’s occupation of Abkhazia and South Ossetia, the Kremlin-cultivated narrative on NATO-member Turkey as an occupier state to some extent encourages the “legitimacy” of a similar behaviour on the part of Russia. Spreading the aforementioned myths is an attempt to instil constant fear and demonstrate that if Russia does not protect Georgia, the country will threatened by Turkey and this is a part of the typical Russian propaganda. In addition, Georgia and Turkey have a multi-year strategic cooperation in the fields of energy and trade, and Turkey is our strategic political ally and a NATO-member neighbour which supports Georgia’s membership in the Euro-Atlantic alliance as well as its territorial integrity and sovereignty.