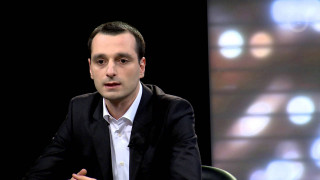 During the rule of the Georgian Dream, prices have increased by 20% on goods, by 18% on utilities, by 60% on medicines and by 37% on healthcare

Resume: According to GeoStat’s data, consumer prices have increased by 19% during the last six years since the Georgian Dream came to power (October 2018 as compared to October 2012). In this period, prices on goods and alcohol increased by a total of 20.2% which is approximately within the inflation target index.Utility prices increased by 18.2%. Notably, during the pre-election campaign in 2012, the Georgian Dream promised to significantly reduce tariffs on electricity and gas. The promise was not kept and tariffs in fact increased. Prices increased by 37.2% in the health sector. Prices on medicines and therapeutic devices increased by 68.4% which is largely associated with the devaluation of the national currency.

At the plenary sitting of the parliament, European Georgia MP, Irakli Abesadze, stated: “During the rule of the Georgian Dream, prices have increased by 20% on goods, by 18% on utilities (despite the promise to halve the utility tariffs), by 60% on medicines and by 37% on healthcare.”

Irakli Abesadze explained to us thathe used the personal inflation calculator which is published on the webpage of Geostat in order to calculate the inflation rate on individual commodity groups.

From October 2012 to October 2018, the inflation rate (consumer price growth rate) was 19.1%. During this period, prices increased by 70.6% on alcoholic beverages and tobacco. Prices decreased by 20.1% on clothes and shoes.Prices on goods and non-alcoholic drinks increased by 20.2% during the last six years. It should be noted that the price growth index on goods is within the target inflation. The inflation rate was 37.2% in the healthcare sector (medical products, outpatient services, hospital services). Prices on medicines and therapeutic devices increased by 68.4%. The price growth on medicines is directly related to the devaluation of the national currency because a large portion of medicines are imported as are products used for domestic production. Utility tariffs (water, electricity, natural gas and others) increased by 18.4% which is mainly related to the increase in the tariffs of electricity and natural gas. In 2012, one of the Georgian Dream’s pre-election promises was to significantly reduce tariffs on electricity and natural gas. The promise was broken .Electricity and gas tariffs have increased as compared to 2012.

Graph 1: Change of Prices during the Last Six Years according to Individual Groups (October 2018 as compared to October 2012) 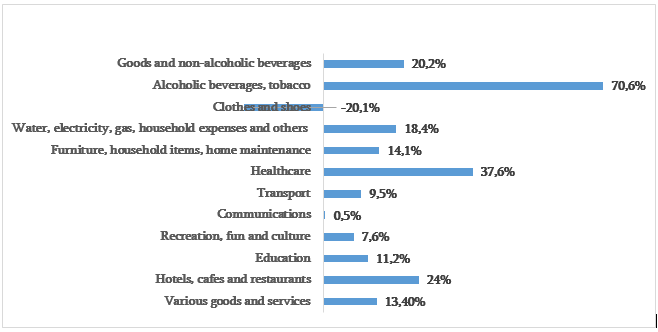