Mostly True
The application is accurate, but requires additional information and/or definition
Facebook Linkedin Twitter Print
Verdict: FactCheck concludes that Irakli Kobakhidze’s statement is MOSTLY TRUE. Resume: In 2012-2017, the real GDP per capita increased by 20.2%; that is, from GEL 6,343.4 to GEL 7,624. This figure, if denominated in the USD average exchange rate in 2010, shows that Georgia’s GDP per capita increased from USD 3,558.5 to USD 4,276.9.[1]

The methodology which Irakli Kobakhidze presumably used to measure the GDP per capita in USD is objective and gives a real picture. However, the figures he named lack precision because he deducted USD 58.5 from the 2012 figure and added USD 223.1 to the 2017 figure in order to round up the number.

Analysis The Speaker of the Parliament of Georgia, Irakli Kobakhidze, whilst discussing the country’s economic situation, talked

The gross domestic product (GDP) shows the total amount of goods and services intended for final consumption which measures a country’s size and scale of economy. In addition, the GDP per capita is one of the indicators of the quality of life in a given country. In order to exclude the inflation effect whilst measuring the GDP, it is measured in constant prices for 2010 and denominated in the national currency. This shows the real volume of a country’s economy.

Because Irakli Kobakhidze speaks about the GDP within the context of poverty which is measured by incomes distributed among the population, it would be appropriate to consult the GNI[2] per capita figures as calculated by the World Bank’s Atlas

method. The World Bank uses figures calculated by this method in order to group countries in terms of their levels of income. The GNI is converted by a special exchange rate and not by the simple exchange rate whilst inflation and changes in the currency exchange are excluded. This makes the figure more realistic although the substantial influence of changes in the exchange rate is still maintained and which complicates the analysis over time. 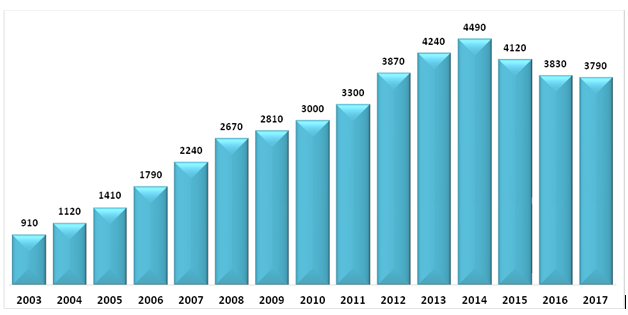