Verdict: FactCheck concludes that Irakli Kobakhidze’s statement is HALF TRUE. Resume: In

Half True
The statement is partly accurate, but the details are missing or some of the issues are without context
Facebook Linkedin Twitter Print
Verdict: FactCheck concludes that Irakli Kobakhidze’s statement is HALF TRUE. Resume: In 2017, Georgia’s economic growth constituted 5% which put Georgia in the 7th position of the region’s 24 countries. The average regional economic growth is 4.1%. Even though Georgia occupies the 7th

position in terms of economic growth rates, it is hard to plainly consider this position as “one of the highest.” On the one hand, the economic growth rate of the immediate neighbour countries (Armenia, Turkey) is much higher. On the other hand, the performance of the next five countries in the ranking after Georgia is within the margins of 4.4% - 4.6% which is not considerably below Georgia’s result.

position in the region.

It is important to clearly define the region in which Georgia belongs because this does have relevance in terms of making any comparisons. In accordance with the World Bank’s methodology, Georgia belongs to the group of European and Central Asian countries (excluding the high-income countries). The characteristics of the economies of these countries are more or less similar. Therefore, Georgia’s economic growth rate should be analysed against the group of the 24 non-high-income European and Central Asian countries.

of the 24 countries of this group. In turn, the country’s high economic growth rate in 2017 is fully related to the improvement in the regional economic situation as compared to previous years and is mostly the result of the high economic growth in Georgia’s top trade partners which contributed to the increased foreign demand and the significant growth of Georgia’s economy. In the same year, Armenia (7.5%), Turkey (7.4%), Tajikistan (7.0%), Turkmenistan (6.5%), Uzbekistan (5.3%) and Poland (4.6%) had the highest regional economic growth rates. 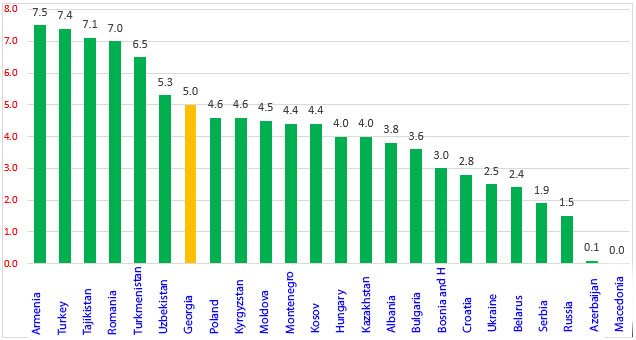 position in the ranking whilst the regional average economic growth rate was 2.9%. Uzbekistan, Tajikistan and Turkmenistan showed a strong economic performance within the regional grouping in the same year. 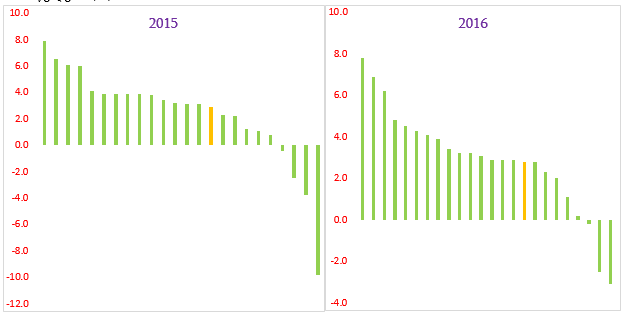 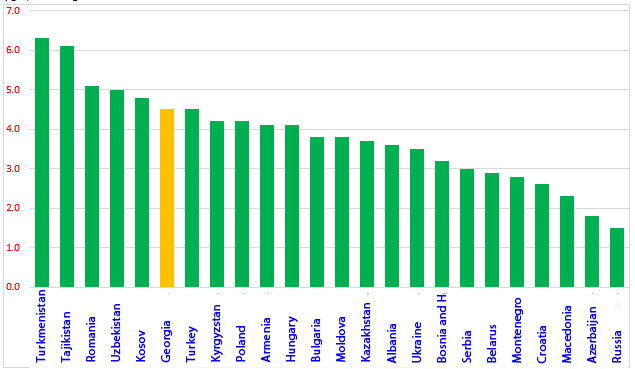