In the last years, we have spent GEL 2 billion on agriculture but growth constitutes only 4.5%

Verdict: FactCheck concludes that Zurab Japaridze’s statement is HALF TRUE. Resume: In

Half True
The statement is partly accurate, but the details are missing or some of the issues are without context
Facebook Linkedin Twitter Print
Verdict: FactCheck concludes that Zurab Japaridze’s statement is HALF TRUE. Resume:

In 2013-2018, funding for the Ministry of Agriculture comprised a total of GEL 1,690,600 million and GEL 1,456,700 million in 2013-2017. In this period, despite the increased funding, the real growth rate of agriculture has been declining. Moreover, in 2017, the agriculture sector decreased by 2.7%. In addition, the share of agriculture in the gross domestic product (GDP) has a tendency of decline. Since 2012, Georgia’s economy has increased by 20.2% whilst the agriculture growth rate in the same period was 12.1%. Therefore, other fields of the economy are growing and developing faster than agriculture.

It is true that if we compared Q1 of 2018 to Q1 of 2012, the agriculture sector real growth rate is 4.5%. However, this type of comparison is wrong because Zurab Japaridze speaks about annual figures of expenses whilst using quarterly data to assess the agricultural sector’s growth rate. In the period of 2012-2017, the agricultural sector increased by 12.1% in total. This said, however, the context of Mr Japaridze’s statement in regard to the inefficiency of the sector is true because only GEL 190.6 million of added value was created in agriculture in the same period.

Analysis Candidate for President of Georgia, Zurab Japaridze, has spoken about agriculture. Mr Japaridze stated that in the past years GEL 2 billion was spent on agriculture whilst growth in  the sector constituted only 4.5%. FactCheck

spoke with Zurab Japaridze himself about his aforementioned statement. He clarified that he was referring to the Georgian Dream’s tenure in power when he said “in the past years” and  used data for Q1 of 2018 (as compared to the same period of 2012) when speaking about the growth rate.

In the period of 2013-2017, the total funding allocated for the Ministry of Agriculture was GEL 1,456,700 million whilst this figure increases to GEL 1,690,600 million with the planned expenses for 2018. In 2013-2017, assignments for the Ministry of Agriculture constituted an average of 3.0% of Georgia’s state budget.  However, the 2018 state budget has this figure at 1.9% which amounts to GEL 233.9 million in absolute figures. In 2018, funding for the Environmental Protection and Agriculture Ministry (without Environmental Protection) is GEL 95.2 million less as compared to the previous year. Of note is that substantial growth in agriculture funding started in 2012 when its share of total expenses reached 2.9% (this figure was 1.1% in 2011). 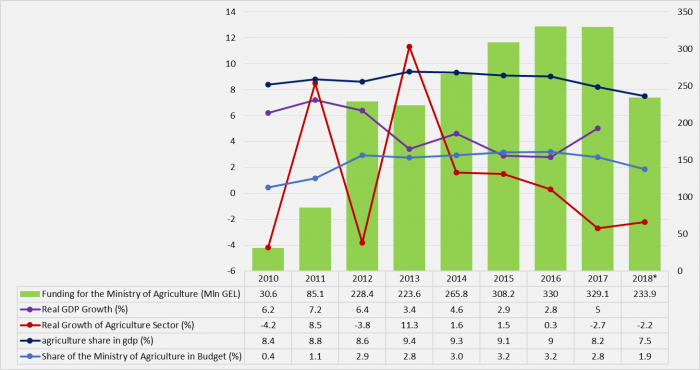 Source: Ministry of Finance, National Statistics Office of Georgia[1] The real growth/decline trends in agriculture have been unstable. Even though funding for agriculture increased (absolute) by 168.3% and the share of budget assignments reached 2.9% from the previous 1.1% in 2012, the agriculture sector decreased by 3.8% in 2018. In 2013, the amount of funding was almost the same with that year having been distinguished with an 11.3% growth. However, this growth only brought short-term results which could have been related

to the initial effect of voucher distribution that same year. After these years, the figures for both the nominal and relative (share in assignments) funding for agriculture have been on the rise. The real growth of agriculture in 2014 and 2015 was 1.6% and 1.5%, respectively, but only 0.3% in 2016 despite the largest funding allocated for agriculture. In 2017, funding for the Ministry of Agriculture was GEL 329.1 million (2.8% of the total expenses of the state budget) whilst the sector decreased by 2.7%. In the Q1 of 2018, the agriculture sector declined again, this time by 2.2%.

of the total employment; that is, 736,500 individuals. Production produced by 43.2% of the country’s total employed constitutes only 8.2% of the GDP is yet another confirmation of the inefficiency of agriculture and the low incomes earned by those employed in the sector which further reflect on standards of living.

In regard to the growth rate in percentage as mentioned by Zurab Japaridze, this is a comparison of Q1 of 2018 to the same period of 2012. In Q1 of 2018 as compared to Q1 of 2012, the real growth of agriculture is 4.5% but this type of comparison is wrong because he speaks about funding for a five-to-six year period and its results. Therefore, in order to measure results instead of making a comparison of quarterly data, it is appropriate to use annual figures; that is, a comparison of the annual figures for 2017 and 2012. In 2012-2017, the agriculture sector increased by 12.1% which constitutes GEL 190.6 million in absolute numbers.[2]

In this same period, Georgia’s entire economy increased by 20.2%. Of note is that those sectors of the economy with little or no state contribution have growth rates exceeding 50%.

Funding is given in accordance with the 2018 state budget. The first quarter data for 2018 is compared to the same period of the previous year.