However, it is important to take those factors into account, which has affected growth of debt figures. In case of the government debt, its major part is denominated in a foreign currency. Therefore, growth of foreign debt in GEL was largely stipulated by depreciation of GEL exchange rate. In 2013-2017, net flows of foreign debt (borrowing minus debt service) constituted only GEL 2.9 billion, which is 44.35% growth as compared to 2012 and lags behind the GDP growth rate (45.38%) in the same period. Therefore, increase in government’s foreign debt in GEL was caused by re-calculation of debt accumulated before 2012 in accordance with the new exchange rate. Without this effect, government foreign debt to GDP ratio would have been reduced. In turn, depreciation of GEL exchange rate cannot be flatly considered as a result of the Government of Georgia’s erroneous policy.

Of note is that in 2013-2016, in parallel with growth of domestic debt in absolute figures, the relative number (debt to GDP ratio) has also been growing. However, even in light of that growth, without the foreign debt balance re-calculation effect, the Government of Georgia could have kept total foreign debt at the level of what was registered in 2012, i.e. relative figure would have increased only by 1.87 percentage points to 34.42% instead of today’s 44.57%.

European Georgia – Movement for Freedom MP, Zurab Tchiaberashvili, on air on Imedi TV stated that the Georgian Dream had inherited GEL 8.5 billion government debt, whilst as of today the debt was increased to GEL 18.5 billion.

In accordance with the Ministry of Finance’s data, as of 31 December 2012 Georgia’s government debt was USD 3,997 million, which was GEL 6,622 million to use the GEL-USD exchange rate for that period. At the same period, Georgia’s domestic debt, without the so called legacy debt1 (GEL 672 million), was GEL 1,230 million. Therefore, total government debt (sum of foreign and domestic debts) calculated in GEL was GEL 8.52 billion with the legacy debt and GEL 7.85 billion without the legacy debt.

Discussion about the volume of debt is appropriate only by using the relative figures, because any specific absolute figure can be very big for a small economy and very small for a relatively bigger economy. In order to properly assess the debt burden, it is widely accepted to use total debt amount to gross domestic product (GDP) ratio. The respective figures for 2010-2017 are given in the Graph 1. 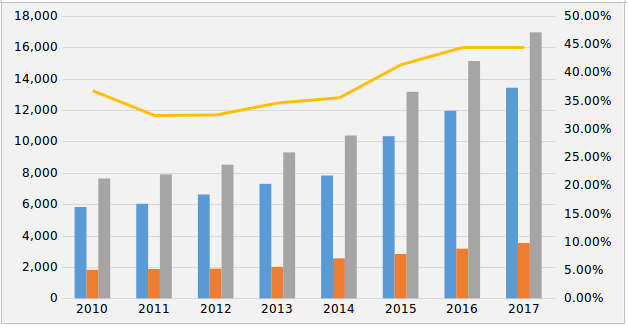 We see that GEL denominated figures for both domestic and foreign debts have a tendency of growth. In 2012-2017, total government debt to GDP ratio was also on the rise and the figure increased from 32.55% to 44.57%.

However, whilst emphasizing the growth of debt, of necessary mention is the fluctuation of GEL exchange rate in the given period. Specifically, after changes in exchange rate, at the end of a period new exchange rate is applied not only to the newly added debt (debt taken in a year) but to the accumulated debt balance for the period of time. Therefore, growth of government debt was largely stipulated by the re-calculation of debt accumulated under the previous government before the end of 2012 using the new exchange rate. In other words, even if the Government of Georgia had not taken more debt (inflow) as compared to what was paid (outflow), GEL denominated debt would have been increased in any case. Therefore, debt growth did not result from taking massive new obligation but was in fact caused by re-calculation of accumulated debt using the new exchange rate. For instance, as illustrated by the graph, since the end of 2015 until the end of 2015, foreign debt in GEL has increased by GEL 2.5 billion, whilst the net growth of obligations in 2015 was only GEL 694,000. The remaining difference in growth was largely stipulated by re-calculation (changes in exchange rate) of already accumulated debt.

In regard to changes in currency exchange rate per se, in the given period USD index has increased substantially, which resulted in worldwide appreciation of USD against every other currency. Apart from direct impact of appreciation of USD, of note is the indirect effect. Specifically, when Georgia’s trade partner countries’ currencies depreciate, that worsens Georgia’s trade conditions and increases negative trade balance, which in turn contribute to depreciation of GEL exchange rate. Therefore, the Government of Georgia was devoid of instruments to eradicate the impact of appreciation of USD and keep GEL exchange rate at the existing level. Difficult situation in the region and in Georgia’s partner countries also negatively affected currency inflows and GEL exchange rate. The Government of Georgia was also unable to significantly influence external factors, although its certain actions (low economic growth rate, restricted visa regime with certain countries, unequal spending of state finance etc) also provided additional pressure upon GEL exchange rate (see link 1; link 2)

If we exclude the re-calculation effect of the accumulated debt as of December 2012, considering the GDP growth rate into account, domestic debt to GDP ratio would have increased, although relative figure of foreign debt would have decreased. Nominal GDP was 45.38% higher in 2017 as compared to 2012, whilst in the same period net growth of foreign debt was only 44.35%. In other words, in 2013-2017 economic growth rate was higher as compared to the growth of foreign debt. Therefore, if accumulated debt as of December 2012 was not re-calculated using a new exchange rate, foreign debt to GDP ratio would have decreased.

1 Legacy Debt constitutes the obligations accumulated during the Soviet times, estimated to be approximately GEL 672.3 million.