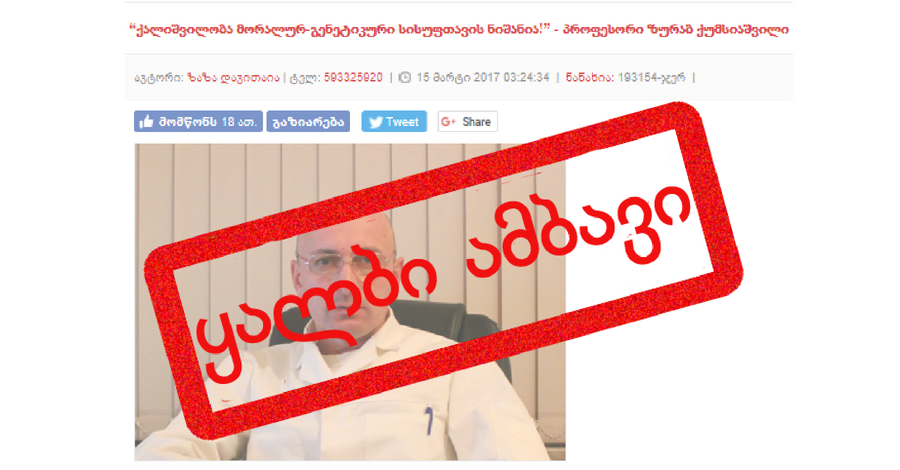 A woman’s heredity is affected by her previous sexual partners

Verdict: An article published by Sazogadoeba.ge is FAKE NEWS.

Resume: An article published by the internet media outlet, Sazogadoeba.ge, claims that a woman’s heredity is affected by her previous sexual partners, notwithstanding who actually fathers her children. This theory is known as telegony which is a false science and does not apply to humans (according to scientific studies, in the entire animal world the aforementioned practice is only detected in fruit flies and is stipulated by their specific morphology and reproductive strategy). The falsity of telegony is proven by both genetic as well as cytoplasm heredity[1] principles. Spermatozoid remains inside a woman’s body for 72 hours on average after which it dies. In the case a spermatozoid fails to fertilise an egg, it is ultimately completely expelled from the body. In regard to the formation of an egg, only a woman’s genes take part in the process and the impact of any external factors is excluded.

The internet media outlet Sazogadoeba.ge published an article entitled “Virginity is a Sign of Moral and Genetic Purity” where the author writes about telegony and claims that a “woman’s heredity is affected by her previous sexual partners. Of paramount importance is the first man who creates the genetic foundation for a woman’s future offspring, notwithstanding who the actual father will be in the future.” To prove his claim, the author of the article provides arguments from Professor Zurab Kumsishvili, the founder of integral medicine in Georgia.

According to a variety of research studies, all of the aforementioned is untrue because telegony does not apply to humans and it is labelled as a pseudo-science. Scholars at New South Wales University (Australia) carried out an observation on fruit flies (Neriidae type) in 2014 and came to the conclusion that the undeveloped eggs of a female fly absorb the first partner’s sperm molecules which affect the offspring. However, authors of the research study state that fruit flies are the only ones in the animal world where this phenomenon is detected in the reproductive process. The transgenerational effect described above is stipulated by the specific morphology and reproductive strategy of the Neriidae flies. Science rejects the possibility that the same practice applies to humans. Sperm in a woman’s organism “lives” for 72 hours on average during which time it is able to fertilise the ovulated egg. The rest of the eggs are in an egg cell and cannot be accessed by a spermatozoid. In the case when a sperm fails to fertilise an egg, it remains without nourishment and dies. It is then fully ejected from the body during the follicular phase of the menstrual cycle. Therefore, it is impossible and excluded that genetic information remains within the woman’s body. The falsity of telegony is proven if we look not only at genetic but also cytoplasm heredity. The latter represents an organism’s material structures and its functional characteristics which are inherited through cytoplasmic factors. However, at the cell level it is only the mother’s genes which take part in the maturing of an egg and which excludes any external effects to interference. In order to support their arguments, followers of the pseudo-science of telegony often point to the existence of genetically different gene cells in the brains of women which are characteristic for males. This argument, however, also fails to lend support to their claim. According to research conducted in 2005, the reason behind the existence of male gene cells in the brains of women (of 154 women participating in the research, only 21 or 13.6% had similar cells) is either a pregnancy with a child or a male twin who died in the embryonic period or because of a non-irradiated blood transfusion (women participating in the research confirmed the existence of one of these factors). Therefore, the existence of gene cells in the brains of woman which are characteristic for males does not have anything to do with any of her sexual partners.

Therefore, telegony does not apply to humans and is labelled as a false science. The article published by the Sazogadoeba.ge website is FAKE NEWS.