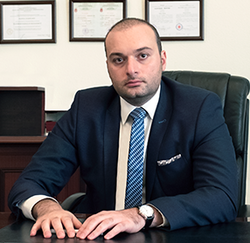 For Georgian Railway, in terms of revenues, 2014-2015 were the most successful years financially although a large amount of cargo which used to move by rail is now transported by pipeline

Mostly False
In the statement is the elements of the truth, but the important facts that could have made other impressions
Facebook Linkedin Twitter Print
Verdict:  FactCheck concludes that Mamuka Bakhtadze’s statement is MOSTLY FALSE. Resume:

Georgian Railway’s revenues denominated in GEL were the highest in 2014-2015 of all the years in the accounting period (2010-2016) despite a substantially reduced cargo turnover. This increase is because of the depreciation of GEL with Georgian Railway’s tariffs being denominated in foreign currency. As a result of increased financial expenditures because of the fluctuation of currency exchange rates, profit figures have been significantly reduced as compared to previous periods. In 2015, for the first time in the period of the analysis, Georgian Railway’s net profit is negative (loss). The joint performance of 2014-2015, with a GEL 26 million loss, is the worst for the company as compared to any other two-year period.

There is a clear tendency of decrease in cargo turnover both in the case of solid as well as liquid cargo with volumes having dropped by 40% and 55%, respectively, as compared to 2012. In light of decreased

oil prices, the assertion that a cheaper transportation capability (pipeline) is now used for cargo transportation is a legitimate claim. However, a pipeline naturally cannot be considered as an alternative for the transport of solid cargo. Georgian Railway’s solid cargo turnover has also decreased.

Analysis At the United National Movement faction session, candidate for the Prime Minister of Georgia, Mamuka Bakhtadze, who used to be the General Director of Georgian Railway from April 2013 to 14 November 2017, responded to criticism in regard to negative tendencies in Georgian Railway operations. In particular, he stated

that Georgian Railway was the most financially successful (in terms of revenues) in the period of his leadership in 2014-2015. In regard to 2013-2017, Mr Bakhtadze clarified that Georgian Railway’s success as a commercial entity should be assessed with respective criteria and investor attitude. He also added that the reason behind decreased cargo volumes is a decision to switch cargo flows to an alternative means of transportation; specifically, the through the pipeline running across Georgian territory.

The final aim of a railway as a commercial entity should be profit maximisation all things being equal and other specific aims, such as increased cargo turnover, serve the final aim. However, the revenues of a transport company depend directly on the volume of the cargo it transports; that is, it depends on the demand for the company’s services. Therefore, a decrease in the demand for a transport company’s services cannot be considered as a subsidiary factor. In order to achieve the primary goal (increase in revenues/profits), an organisation’s management should be focused on expanding the demand for its services and increasing the share of its company as much as possible within the total existing demand. Naturally, ongoing processes in the economy affect the fulfilment of these goals, although a management’s performance is successful when it does well in a changing environment.

As illustrated in the graph, Georgian Railway’s total revenues in 2010-2015 have a tendency of growth with a decrease only registered in 2016. At first glance, this picture does not make sense because cargo turnover figures have been constantly decreasing since 2012 (see Graph 2). Although, if we take into account the fact that cargo transportation tariffs are mostly denominated in a foreign currency, we will see that an important factor behind the growth of GEL denominated revenues is the GEL depreciation instead of any real positive change. This assessment is further corroborated by the clear tendency of a decrease in profits.

Source:  Georgian Railway Georgian Railway’s net profits have had a tendency of decrease since 2012 whilst its net profit was negative (loss) in 2015 for the first time since 2007. In terms of absolute figures, the joint performance of 2014-2015 was the worst as compared to any other two-year period. In addition, it is visible that operational profit in 2013-2016 increased by 1.5 times. However, as we have already mentioned, the growth in operational profits was largely stipulated by the depreciation of the GEL exchange rate because tariffs are denominated in a foreign currency. At the same time, the substantial growth in financial expenditures[1] (

In regard to the EBITDA margin,[2] 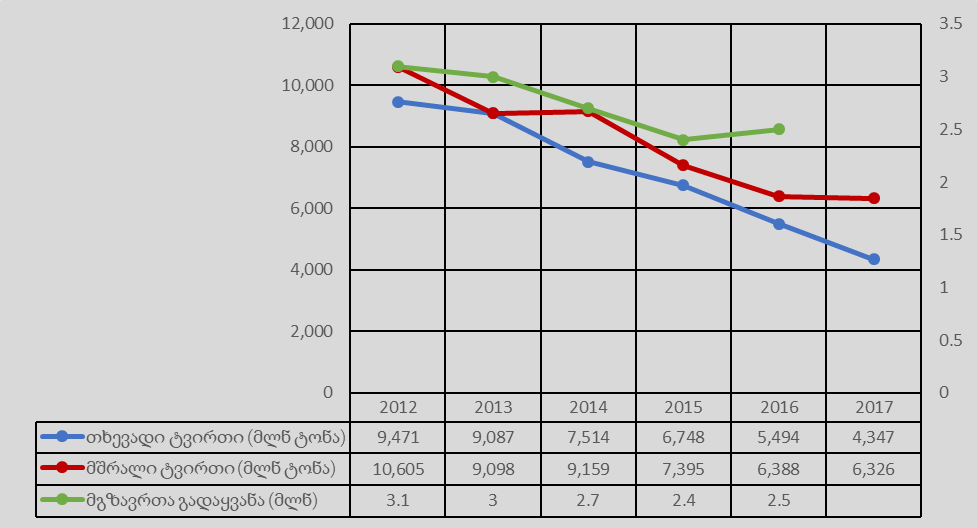 In 2017, Georgian Railway transported 10.7 million tons of cargo which is 1.2 million tons less as compared to 2016. The majority of the decrease is at the expense of liquid cargo. In 2012-2017, the amount of both liquid and solid cargo has shown a constant decline. In five years, the volume of transported liquid cargo decreased by 55% whilst the amount of transported solid cargo decreased by 40%. Therefore, the decline in total cargo turnover cannot be explained by the decreased flow of oil alone.

FX gain or loss on Eurobonds is not monetary in nature and will not be realized until maturity, in addition it will be reversed in the event of GEL appreciation