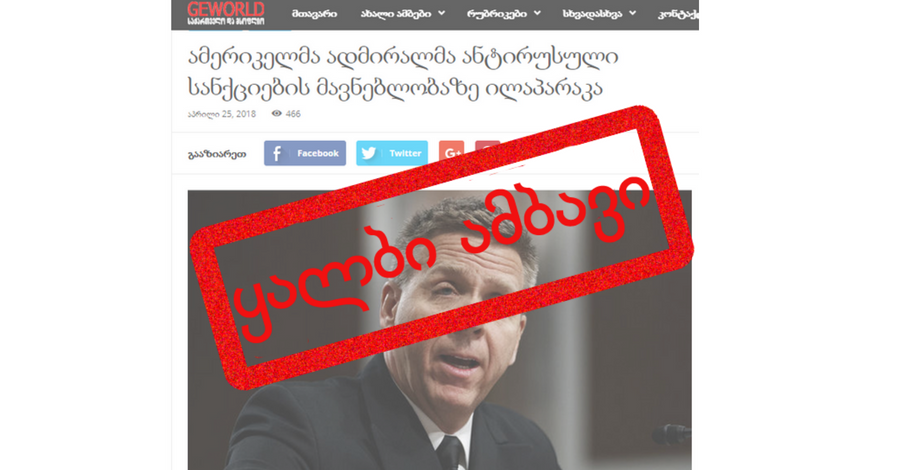 American admiral spoke about the harmfulness of Russian sanctions

Verdict: The news disseminated by Georgia and the World is FAKE NEWS. Resume: The Georgia

Fake News
Fake News
Facebook Linkedin Twitter Print
Verdict: The news disseminated by Georgia and the World is FAKE NEWS. Resume: The Georgia and the World media outlet published an article entitled “American Admiral Spoke about the Harmfulness of Russian sanctions.” In fact, US Navy Admiral and Commander of the US Indo-Pacific Command, Philip Scott Davidson, spoke about the deterring role of the United States in the Indo-Pacific region before the US Senate Committee

on Armed Services. The admiral emphasised that if the US did not help countries of the aforementioned region such as India, Vietnam and Indonesia, then Russia would use their markets for arms trade. The admiral did not speak about the harmfulness of Russian sanctions.

The facts and the analysis given in Georgia and the World’s article do not entirely correspond to the truth but appear as another attempt to portray the United States as a weak state and describe the Russian Federation as a hegemonic power of the international system.

The Georgia and the World media outlet published an article entitled “American Admiral Spoke about the Harmfulness of Russian Sanctions.”  The author of the article tries to persuade readers that American Admiral, Philip Scott Davidson, spoke about the harmfulness of Russian sanctions before the US Senate Armed Services Committee, saying that the United States was no longer able to purchase Russian arms because of sanctions and so this harmed Washington’s relations with partners like India, Vietnam and Indonesia.

Philip 'Phil' Scott Davidson is a four-star admiral of the US Navy and the Commander of the US Indo-Pacific Command. On 17 April 2018, Admiral Davidson appeared at the US Senate Armed Forces Committee hearing and answered questions from senators. Of many issues related to defence and security, Admiral Davidson was asked about his opinion in regard to the Countering America’s Adversaries through Sanctions Act

adopted on 2 August 2017; in particular, whether or not he thought that this Act impeded US actions in the Indo-Pacific region.

Of note is that the Countering America’s Adversaries through Sanctions Act, which imposes sanctions against Russia, Iran and China, contains a section

outlining that the United States will not cooperate with those states which engage in significant transactions with the Russian defence and intelligence sectors; to the contrary, sanctions will be imposed. The senators questioned the issue pertaining to the countries subject to sanctions and the impact the Act would have upon America’s future relations in the Indo-Pacific region.

that it was a fundamental priority for the United States to develop as many alliances and gain as many partnerships in the Indo-Pacific region so that an environment of security, stability and peace for the entire region would be guaranteed. He also added that Russian operations and engagements throughout the Indo-Pacific continued to rise and Russia’s own strategic interests were to undermine US interests in the region whilst Russia also saw economic opportunities for building markets for energy exports and arms sales in the Indo-Pacific.

In accordance with Admiral Davidson’s statement, the aforementioned clause in the Countering America’s Adversaries through Sanctions Act posed a concern for US relationships in the Indo-Pacific with countries such as India, Vietnam and Indonesia. He warned that if the United States decided to sanction these nations, they would purchase Russian arms and equipment and increase their dependence on Russia.

As illustrated by facts verified by FactCheck,

the American admiral speaks about Russia’s deterrence in the Indo-Pacific region and posits that the United States should not sanction countries such as India, Vietnam and Indonesia. Admiral Davidson never mentioned that anti-Russian sanctions were harmful and, moreover, he did not state that the United States was no longer able to purchase arms from Russia because of the sanctions.

Even though the author gives relatively accurate facts in one part of the article, the entire article, including its title, introduction and conclusion, is generally based on false information and aims to discredit the United States as well as glorify Russia.
თეგები: