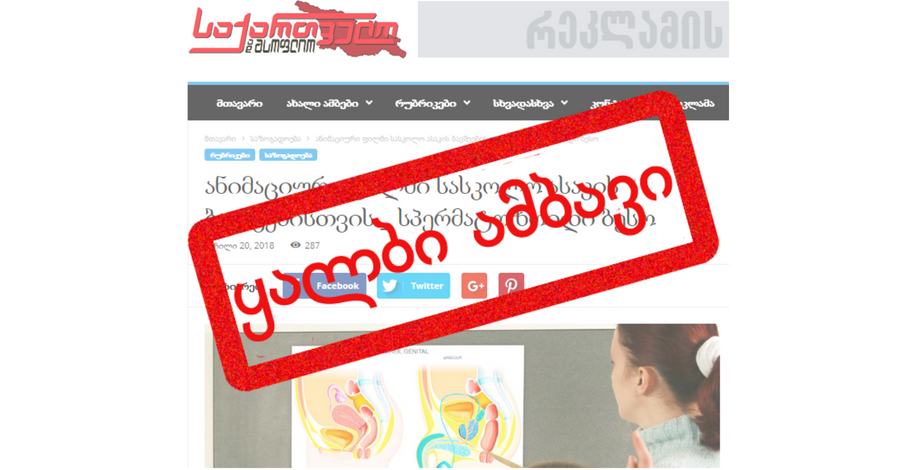 Verdict: The information published by Georgia and the World is FAKE. Resume: The Georgia and

The Georgia and the World media outlet has published an article where the author asserts that the Ministry of Education and Science of Georgia plans to introduce sexual education in a new National Educational Plan. The author, Beso Barbakadze, claims that the Ministry has already produced an animated film about fertilisation and organised its closed-door presentation as well.

The film, which Beso Barbakadze claims was produced by the Ministry of Education and Science, was made several years ago in Germany in the German language and is designated for internet users only. This animated film is not part of Germany’s national educational plan let alone Georgia’s.

entitled “Animated film for school-aged children: Spermatozoid Beso.” In the article, the author claims that the Ministry of Education and Science of Georgia is making an animated film to introduce sex education to schoolchildren. The article also states that the film has already been produced and, furthermore, it was already presented behind closed doors. The author also includes photos as scenes from the film. The author, Beso Barbakadze, asserts that the main character of the film is a spermatozoid named Beso which travels a long way and from which “a girl is born.”

Both the facts and the photos in the article comprise disinformation whilst the article itself cultivates unhealthy attitudes and fears towards this issue among the public.

The first falsified fact is that the Ministry of Education and Science has produced the film and organised a closed-door presentation. The author claims that the film was produced by the Ministry of Education and Science for Georgia’s National Educational Plan whilst in fact the film was not produced in Georgian or for Georgia and not for any school. In fact, the animated film was produced in Germany, in the German language and for a German audience. The film appeared on the internet sometime in March 2012 and was then found in a number of blogs or on YouTube channels.

The film is not a part of the curriculum of German schools let alone Georgia’s. The main character of the animated film is Spermatozoid Willy which Beso Barbakadze has introduced as Spermatozoid Beso.