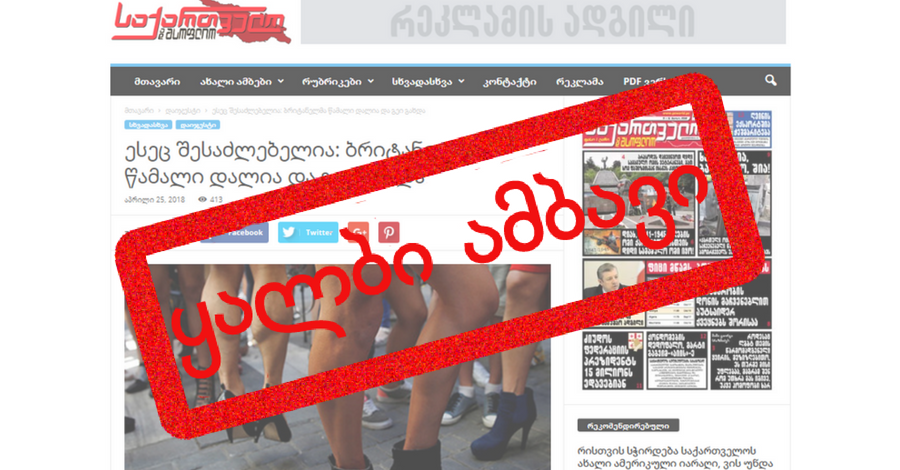 This too is possible: British man took medicine and became gay

Verdict: The story published by Georgia and the World is FAKE.

Resume: The information published by the Georgia and the World media outlet, “This too is possible: British man took medicine and became gay,” is fake. The article features the story of Scott Purdy who claims that after taking the painkiller Pregabalin he lost interest in women and developed an attraction for men. As a result of this change, he feels happy and comfortable.

In fact, the possibility of changing sexual identity as a result of external factors is scientifically rejected. Pregabalin, which is known under the name of Lirica, is used to treat anxiety and paranoia. As clarified by clinical psychologists and psychological health specialists, the medication itself is not the reason behind Mr Purdy’s statement but, instead, it just helped him to overcome his fears and anxiety related to the disclosure of his own sexual identity.

The Georgia and the World media outlet published an article entitled “This too is possible: British man took medicine and became gay.” The article features the story of Scott Purdy, aged 23, who claims that he lost interest in women and started to develop an attraction for men after taking the painkiller Pregabalin. As stated by Mr Purdy, his new sexual preference makes him feel happy and liberated. He claims that he feels free and does not care about what others think since taking the medicine.

The idea that homosexuality is a medical condition and a change of sexuality is possible by specific external methods is long outdated and rebuffed by science. In 1973, the American Psychiatric Association removed homosexuality from the list of mental disorders and determined that “transformation and reparation therapies” (therapies which were used to “treat” homosexuality) are dangerous for the physical and mental health of LGBT people. On 17 May 1990, the World Health Organization (WHO) also removed homosexuality from its list of mental disorders. As stated by the WHO’s Regional Office Director, Mirta Periago, there is no scientific evidence that a change of sexual orientation is possible. The LGBT Foundation’s Chief Specialist for Mental Health, Rossella Nikosia, rules out the possibility of a change of sexual identity as a result of taking the aforementioned medication. As stated by Ms Nikosia, the acceptance of your own sexual and gender identity is related to a myriad of difficulties for many LGBT people. Pregabalin, which is known under the name of Lirica, is used to treat anxiety and nervousness. It affects the work of the brain’s neurotransmitters (a neurotransmitter is a chemical compound which is released at the nerve ending and transmits an impulse from one nerve to another) which reduces pain, anxiety and epileptic attacks. The aforementioned medication has many side effects and reactions; however, it is impossible to assert that Pregabalin affects sexual identity and sexual preferences.

In accordance with Mike Berry, a clinical psychologist, LGBT people experience anxiety that they may be rejected by society in the case of a disclosure of their sexual identity. This was the case for Scott Purdy. After taking Pregabalin, he was able to overcome his anxiety and openly display his sexual identity.

Although the exact factors related to shaping a sexual identity are obscure, scientific research excludes a connection between hormonal conditions after birth and sexual orientation. Research carried out by scholars of Harvard Medical School and California’s San Francisco University illustrate that there is no cause-and-effect relationship between a post-natal hormonal level and sexual orientation. The US National Health Institute published a research study on homosexuality in 2012. The result of this epidemiological and clinical research shows that sexual identity is a sexually differentiated behavioural feature which is largely determined by an embryo’s pre-natal hormonal environment.

Therefore, the Georgia and the World media outlet’s story does not correspond to the truth whilst the claim that it is possible to alter human sexual identity by external factors is groundless and devoid of any scientific analysis.