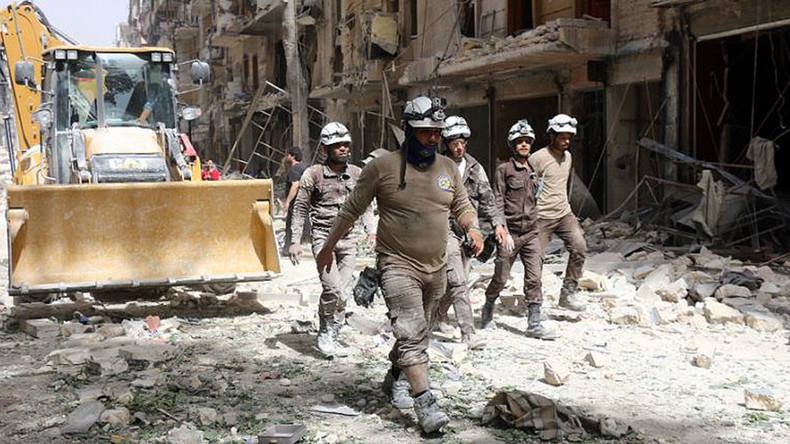 A Syrian volunteer rescuers’ group, known as the White Helmets, became the target of a

A Syrian volunteer rescuers’ group, known as the White Helmets, became the target of a disinformation campaign and has even been labelled as a terrorist organisation connected with al-Qaeda.

The Guardian conducted an investigation

on this matter according to which the anti-White Helmets narrative is primarily backed by conspiracy theorists and trolls supported by the Government of Russia.

is officially known as the Syria Civil Defense and unites 3,400 volunteers. Their members include people of various professions:  former teachers, engineers, firefighters, etc., who are fighting to help and save the lives of those who ended up under rubble after the bombings. They have saved the lives of thousands of people in the course of the ongoing Syrian civil war.

Despite the international recognition of the White Helmets (Amnesty International, The Right Livelihood Award),

there is a number of individuals voicing quite strong accusations against the organisation via the so-called “alternative” news agencies. Their opinions fall in line with those of Assad’s regime and Russia. The Russian positions are mainly reinforced by ultra-rights, Russian state television channels and Twitter bots.

The case of targeting the White Helmets by the Russian propaganda machine clearly shows how various items of gossip, conspiracy theories and half true news end up at the top of YouTube, Google and Twitter search algorithms.

The campaign to discredit the White Helmets began in 2015 when Russia engaged in the Syrian civil war militarily (started to bomb the territories controlled by the opposition forces in support of the President Bashar al-Assad). Following this fact, the Russian state media outlets, such as RT and Sputnik, started to disseminate fake news that ISIS was the only target for Russia. In addition, the same propaganda machine provided publicity to anti-American activists and bloggers on social media who believe that the White Helmets are terrorists. It is also noteworthy that the information shared by them lacks credible sources. According to international politics experts, the members of the aforementioned campaign do not seem to realise that they themselves are victims of manipulation.

Why did the White Helmets specifically become Targets of Disinformation?

It is interesting that the White Helmets specifically became targets of disinformation. They play two roles in Syria:  rescuers (providing first aid to the injured as well as participating in search and rescue activities) and providers of real footage from the site of ongoing events in Syria through cameras attached to their helmets. According to the Campaign Manager of Amnesty International Crisis Response, Kristyan Benedict, the White Helmets and their activities cause quite a lot of headaches not only for Assad’s regime and Russian politicians but for all propagandists who act within their orbit. It is exactly through the White Helmets that the Syrian population can contact international humanitarian organisations.

The White Helmet cameras recorded the chemical attack that took place in 2017 and killed 83 people of whom two-thirds were children. As UN war crime investigators later concluded, the attack was carried out by the Government of Syria against its own people. Russian state media and their supporters in “alternative” news agencies continue to question the investigators’ report and label it “illogical” and “fabricated footage.” An ultra-right website, Infowars, repeated the aforementioned conspiracy theory and accused the White Helmets of carrying out a pre-determined scenario of the chemical attack. In addition, it accused the volunteers of having ties with the terrorist organisation, al-Qaeda, and stated that they are funded by George Soros. However, as The Guardian’s aforementioned investigation concludes, the White Helmets have not received any kind of funding from either George Soros or any of his foundations (the information that the White Helmets have ties with the terrorist organisation al-Qaeda or the funding received from George Soros is not confirmed. See the link). Types of Propaganda Directed against the White Helmets Vanessa Beeley is one of the biggest sceptics of the UN investigation. She, together with her supporters, disseminated photos “confirming” that the chemical attack was a staged scenario on several occasions; however, international fact-checking agencies Snopes and Channel 4 News

revealed that the photos are fake and fabricated (the given links include detailed argumentation why the claims made by the propagandists are a lie). Vanessa Beeley travelled to Syria for the first time in 2016 and had a two-hour long meeting with the President Bashar al-Assad. She later described this fact as “the proudest moment” of her life. She has also been invited to Moscow to present a report about the “dirty Syrian war.” Ms Beeley met with like-minded people in Moscow, including:  Deputy Foreign Minister, Mikhail Bogdanov, and the Director of the Information and Press Department of the Ministry of Foreign Affairs of Russia, Maria Zakharova.

The Russian strategy proved to be quite successful in creating a discussion directed against the White Helmets. Through loading social media algorithms with an enormous amount of fake information, sponsored bots, puppet accounts and network of agitators, the propagandists created a sort of “artificial consensus” which provides legitimation to the extremist and marginalised groups. Russian special services are also, quite often, discrediting the White Helmets. For instance, the Embassy of the Russian Federation in the United Kingdom disseminates so-called memes

via its Twitter account aimed at demonizing the volunteers. The ultimate goal of such acts is to de-legitimise the role of the West in stabilising Syria. As Samantha Bradshaw, a researcher with the Computational Propaganda Project at Oxford University, states, it is easier to mislead and manipulate the public by disseminating vast and contradictory information. This is the method that the supporters of Bashar al-Assad’s regime and the Russian state media outlets apply.

It is noteworthy that the researchers of disinformation and internet propaganda found evidence of Russian influence in the campaign directed against the White Helmets. Analysts looked at Russian disinformation campaign groups. The research showed that 14 thousand Twitter users that disseminate propaganda against the White Helmets are “very similar to each other.” It includes a lot of those pro-Kremlin troll accounts, a part of which was closed due to the investigation on Russia’s interference in the 2016 United States presidential elections. The remaining part of those Twitter accounts publish 150 tweets daily, on average, which has been deemed suspicious by the researchers.

The detailed analysis about the fake nature of the conspiracy theories disseminated by the propagandists that question the atrocities committed by the Government of Syria against its own people can be found at the following links:  Link 1, Link 2.
თეგები: