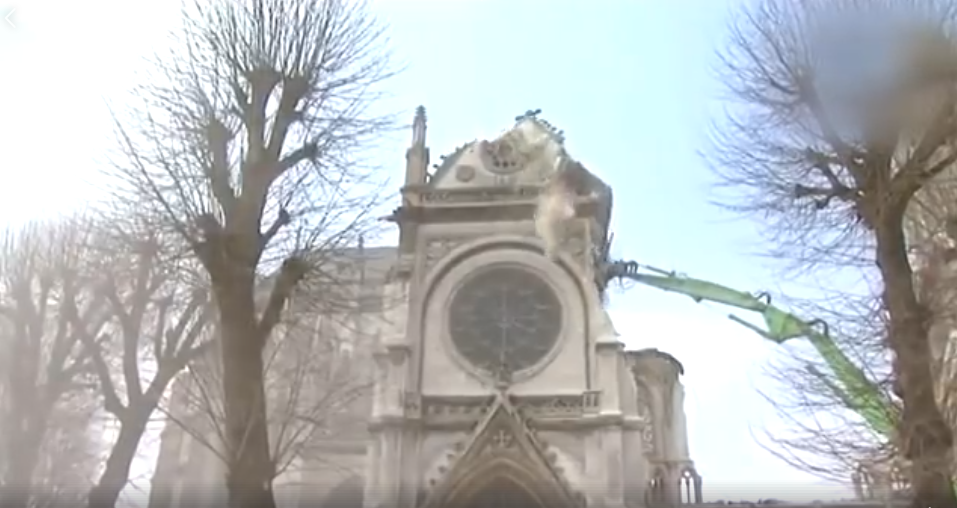 Verdict: The video disseminated via Facebook showing the destruction of a church and the

Views: 4556
Manipulation of Facts
The facts revealed in the statement are more or less correct, but the full context is deliberately distorted
Facebook Linkedin Twitter Print
Verdict: The video disseminated via Facebook showing the destruction of a church and the accompanying caption represent a MANIPULATION OF FACTS. Summary:

A video showing the destruction of the church disseminated on Facebook by a user named ბექა ვარდოსანიძე (Beka Vardosanidze) was posted with a caption: “In the next ten years, 2,800 churches might get demolished in France. Catholicism has been weakened both from the inside and the outside. Islam is growing fast due to petrodollars and Islamic immigration.” Both the video and the caption represent a manipulation of facts.

The aforementioned video was initially published on Facebook by a page called “Pro Chritianis” (the page aims to raise awareness about the persecution of Christians and the fight against Christianity). In fact, the video shows the demolition of the Saint-Jacques church in Abbeville, France. The Abbeville City Hall made its decision on this issue in 2013 as its emergency condition (frequent falling of construction materials) was violating security norms and was dangerous for the population living nearby. Restoration would require millions of euros – something that the city hall could not afford. In addition, L’observatoire du Patrimoine religieux (the Observatory of Religious Heritage) expressed a prediction that in the course of ten years, up to 2,800 churches in France would face the threat of collapse. However, in order to avoid collapse and prevent unfortunate incidents, 29 churches were demolished in France in the period between 2007 and 2017 (ten years).

As of 2017, there are 42,258 churches and 2,500 mosques in France; therefore, Christian churches are by no means under the threat of ending up in the minority. The video and its caption disseminated on the social network aim to demonise Islam.

Analysis A Facebook user, ბექა ვარდოსანიძე (Beka Vardosanidze), published a video showing the demolition of a church in France with the accompanying caption: “In the next ten years, 2,800 churches might get demolished in France. Catholicism has been weakened both from the inside and the outside. Islam is growing fast due to petrodollars and Islamic immigration.” He shared the post from the Facebook page called Pro Christianis. The building shown in the video is the Saint-Jacques church which was located in Abbeville (northern France). In 1940, 80% of the town was destroyed. The Saint-Jacques church was constructed in 1878 in a neo-gothic style. In 2004, a storm destroyed the bell tower, seriously damaged the roof and left a large crack in the northern wall of the church. This significantly deteriorated the overall condition of the church. The building represented a serious danger to the public as it was located in the centre of the square, close to homes and a school. Construction materials (stones) and windows were often falling from the structure and the walls were cracking which necessitated the evacuation of people living nearby, including school pupils, on several occasions. As the condition of the church was deteriorating on a yearly basis, the Abbeville City Hall took a decision in 2010 regarding its demolition. This decision was justified by the fact that restoration would have been associated with costs unbearable for the municipality (according to the mayor, approximately EUR 10 million whereas according to an architect, Vincent Brunelle, this amount would have been EUR 4.2 million) whilst inaction could have resulted in unfortunate accidents. The final decision to demolish the Saint-Jacque church was taken in 2013 after a report made by an expert. According to the report, the building was on the verge of collapse at any moment. The church was demolished in February 2013. On the site

of the building, in the centre of the square, the historical bell and pieces of its wall were placed as a tribute to the church. Father Jean-Louis Brunelle, the priest of the church, did not question the city hall’s decision but welcomed the idea to place the memorial pieces on the site of the former church.

There are 42,258 churches in France of which 15,000 are protected at the state level. The number of mosques in France equals 2,500. In 2007, the Observatory of Religious Heritage predicted that 2,800 churches would be under threat in ten years. However, it is important that in the course of ten years, 29 churches were destroyed

in France (with the aim of preventing collapse and unfortunate incidents). It is noteworthy that according to French legislation, city halls and their budgets are fully responsible for the buildings located in their cities, including their condition. In the cases when restoration is associated with millions of euros and the church (or any other building) does not represent a monument of historical heritage, city halls are forced to adopt the decision regarding demolition (as happened in the 29 cases mentioned above).

Therefore, the video and its accompanying caption disseminated on Facebook represent a manipulation of facts aimed at discrediting and demonising Muslim immigrants.