A total of 4.07 million people used the services of Georgian airports in 2017 which is indeed a record-breaking number. The number in 2016 was 2.84 million. Therefore, the total growth in the number of passengers at all Georgian airports in 2017 was 43%. Last year was unprecedented in terms of the number of visitors coming to the country as well. Some 7.6 million visitors crossed Georgia’s border in 2017 which is 19% more as compared to the previous year’s figure. Of note is that the visitor growth rate is 11 percentage points higher as compared to the same figure for 2016.

Analysis On 22 February 2018, the Minister of Economy and Sustainable Development of Georgia, Dimitri Kumsishvili, stated:

“Last year was a record-breaking one for Georgia’s aviation market… The total growth of the number of passengers at all Georgian airports constituted 46%. Of note is that more than 7 million international visitors came to Georgia.”

Based on the data of the Georgian Civil Aviation Agency, the Georgian National Tourism Administration publishes statistics of passenger flow at Georgia’s airports. In accordance with the Administration’s information, 4.07 million people used the services of Georgia’s airports which is 43% (1.23 million) more as compared to the same figure for 2016. The amount and passenger growth rate are unprecedented (

these types of statistical data have been available since 2010).

Of the passengers coming to Georgia, the majority used Tbilisi International Airport which served 3.16 million passengers and is 40% more as compared to the same figure of the previous year. This growth rate, however, is lower as compared to those of the country’s other airports. The highest growth rate of passengers was registered at Mestia’s King Tamar Airport (72%) whilst the number of passengers grew significantly at the Batumi (59%) and Kutaisi (49%) airports. The Ambrolauri airport was opened in 2017 with 1,723 people having taken flights through the new facility.

Source: Georgian National Tourism Administration, Georgian Civil Aviation Agency When discussing border crossing statistics, it is important to differentiate between a tourist and a visitor. All foreign nationals entering Georgia, including those who spent less than 24 hours or were in transit, are considered as visitors whilst a tourist is an international visitor who spent 24

hours or more in Georgia.

In accordance with the information of the Ministry of Internal Affairs of Georgia, 7.55 million people crossed Georgia’s border which is 18.8% more as compared to the same figure of the previous year. Of that number, 3.5 million tourists spent 24 hours or more in the country which constitutes 46% of the total number of visitors. In 2017, 2.39 million people visited Georgia for one day whilst 1.69 million used it as a transit route. The largest number of visitors to Georgia came from Armenia (1.71 million) which was followed by Azerbaijan (1.69 million), Russia (1.39 million), Turkey (1.25 million) and Iran (332,000). In the last 11 years, the number of visitors coming to Georgia has been increasing annually. In accordance with the World Bank’s data, Georgia is ranked 3rd

after Belarus and Bhutan in terms of the visitor growth dynamic in 2006-2016. 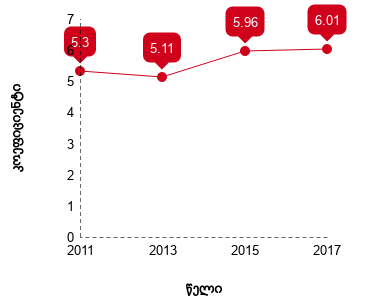 Source: Ministry of Internal Affairs of Georgia Of importance is that, together with the number of visitors, tourism incomes have been increasing steadily. In accordance with the data for the first three quarters of 2017, tourism incomes amounted to USD 2.17 billion which already exceeds the total tourism income figures for 2016.