United National Movement member, Roman Gotsiridze, commented upon the results of the inspection of

upon the results of the inspection of the Georgian section of the Baku-Tbilisi Kars railway on social network: "Yesterday, the Minister of Economy admitted that only 70% of the Georgian section of the Baku-Tbilisi-Kars railway is completed. However, the railway should have been launched this year. This year, the train will move forward and backward in a testing regime. All of these activities should have been completed five years ago. The expenditures amounted to almost USD 1 billion and they say too much remains to be done."

The Baku-Tbilisi-Kars new railway line is a transport corridor

which connects the railways of Azerbaijan, Georgia and Turkey. After the completion of the project work, the railway corridor will be opened from the Caspian Sea to Europe. The initial capacity of the new railway is assessed to be one million passengers and 6.5 million tonnes cargo per year which will eventually increase up to three million passengers and 15 million tonnes of cargo per year. 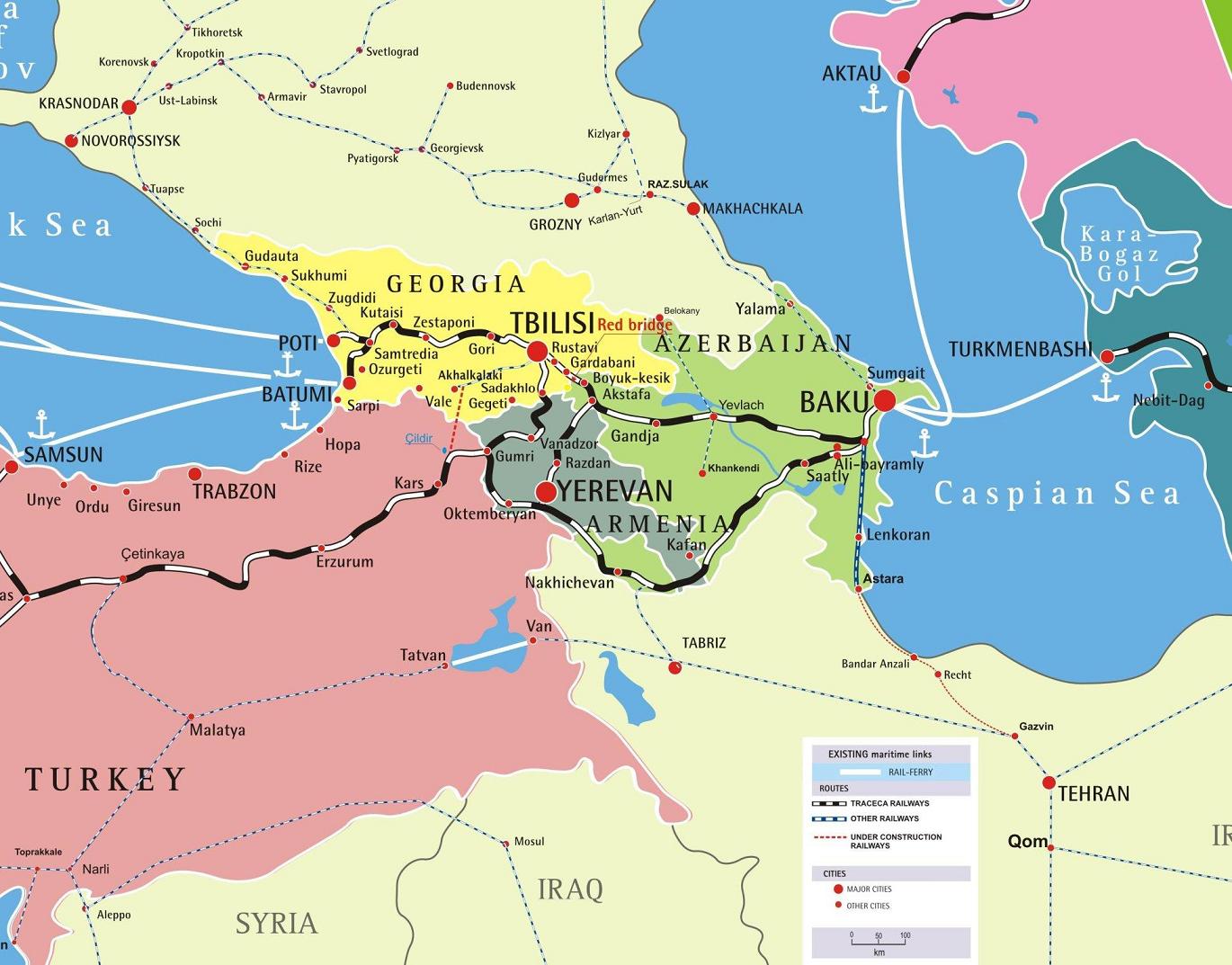 Source: Georgian Railway   The Presidents of Georgia, Azerbaijan and Turkey signed the declaration on building the Baku-Tbilisi-Kars railway line on 25 May 2005. However, the fundraising process for the implementation of the project became complicated. Specifically, the Georgian side did not have the necessary finances to build the Georgian section of the railway whilst attempts to get loans from European and American sources failed.

The US Congress and the European Commission were categorically against providing funds for the projects because it was considered as serving the purpose of Armenia’s isolation. However, despite the fruitful efforts of the Armenian lobby (ARMENPAC and others), funds were obtained and Azerbaijan provided finances for the project.

On 7 February 2007, an agreement for building the new Baku-Tbilisi-Kars railway line was signed between the governments of Georgia, Azerbaijan and Turkey. On the same day, Georgia and Azerbaijan inked an agreement (which went into force on 12 July 2007) which confirmed that funds for the Georgian section of the aforementioned infrastructural project would be fully provided by Azerbaijan. At the initial stage, a USD 200 million loan was issued with a 1% annual interest rate and a 25-year loan repayment period. The Georgian section of the project includes the modernization of the Marabda-Akhalkalaki railway and respective infrastructure as well as building the Akhalkalaki-Kartsakhi (border) railway section. The total length of the Marabda-Kartsakhi section is 180 kilometres.

launching the project work was held in Marabda in November 2007. At the beginning, the date for the completion of the construction work was determined to be 2010. However, the date had be postponed multiple times and as of October 2017 the work is still not officially complete.

There was a myriad of subjective and objective reasons behind the hindrance of the construction work. Together with the political instability brought about by the Russia-Georgia war, the low oil prices during the 2008 economic crisis and post-crisis periods, which negatively affected Azerbaijan’s capacity to provide sufficient funds, also became an obstacle. Difficult terrain and environment were also named as impediments. Specifically, the projected location of the Turkey-Georgia connecting tunnel appeared on a landslide danger zone which naturally necessitated an alteration of the project. At the same time, the railway track’s altitude (from sea level) fluctuates significantly which is an additional difficulty. Despite the problems, the project was being implemented albeit at a slower pace.

On 31 May 2011, the Parliament of Georgia ratified a new agreement according to which Azerbaijan allocated a USD 575 million loan with a 5% annual interest rate. First, 2013 and later 2014 were named as the renewed dates for the project completion. Of note is that the building of the Turkish section was also delayed – it should have been completed by the end of 2010 in accordance to the schedule whilst only 92% of the work had been completed by October 2012. The new government of Georgia’s sceptical attitude

became another additional obstacle for the ongoing work on the railway’s Georgian section. Initially, it was Bidzina Ivanishvili who spoke about the project’s possible unprofitability for Georgia and later other persons associated with the government have also voiced multiple criticisms in regard to the Baku-Tbilisi-Kars railway.

The Azerbaijani side also had questions in regard to delays in the project plan as well as concerning the costs and particularities of the project’s funding. A big question, together with the reasons behind the delays, was the increased cost of the Azerbaijani-funded Georgian section from the initial USD 200 million to USD 775 million with the Azerbaijani section being built with a loan taken from the Czech Republic’s Exsim Bank (Azerbaijan funds the Georgian section but takes a loan from a Czech bank to fund its own section). Law enforcement agencies also took interest in the lawfulness of expenditures. As of 6 May 2014, Georgia’s Prosecutor’s Office was investigating an alleged fact

of embezzlement and the legalisation of illicit incomes by the former heads of the Marabda Kartsakhi Railway LTD. Eventually, after a meeting between representatives of the Azerbaijani and Georgian governments, talks about a possible termination of the project never resumed.

According to the information of the Marabda-Kartsakhi Railway LTD, as of March 2014, only 36.5% of the work had been completed whilst 30 December 2015 was determined to be the new deadline for the project’s completion. The project was not completed for this date although, periodically, information about the test launching of trains was disseminated. In December 2016, a test train passed

along the Akhalkalaki railway station. From there, the train moves from the former Soviet wider sized railway tracks to the comparably narrower railway tracks of the European standard.

According to the information of the Ministry of Economy and Sustainable Development of Georgia, representatives of Georgia, Turkey and Azerbaijan, including the Minister of Economy and Sustainable Development, Giorgi Gakharia, travalled by train to Kartsakhi on 27 September 2017. According to the statement of the Minister, it is already possible to travel from Tbilisi to Kars, albeit only in a test regime. The Minister also stated that only 70% of the construction work has been finished on the Georgian section. The Director of Georgian Railway, Mamuka Bakhtadze, was saying as early as 25 May that Georgia was ready to receive trains and that we were waiting for the Turkish side to complete its work for the project to be complete. At the same time, Azerbaijan believes that the Baku-Tbilisi-Kars railway is ready for operation. The official launch of the railway is scheduled

Initially, the project completion date moved to 2013 and later to 2014. As of March 2014, the Marabda-Kartsakhi Railway LTD said that 2015 would be the next date for the project’s completion. As of 27 September 2017, as assessed by the Minister of Economy and Sustainable Development of Georgia, only 70% of the construction work has been completed. However, according to information of the Azerbaijani side, the official launch ceremony for the new railway is scheduled for 28 October 2017.

Taking into account all of the aforementioned, FactCheck concludes that Roman Gotsiridze’s statement is MOSTLY TRUE.
თეგები: