The GEL depreciation is a seasonal event which has already passed

Views: 2357
Without verdict
The verification of the application can not be evaluated
Facebook Linkedin Twitter Print
After the eight-month long trend of GEL appreciation, Georgia’s national currency depreciated again vis-à-vis USD in September 2017. The Minister of Finance of Georgia, Dimitri Kumsishvili, assessed

the GEL depreciation as a temporary, seasonal event.

Georgia has a floating currency exchange rate. Therefore, the GEL to USD exchange rate is determined by the supply-demand ratio on the currency market. All things being equal, the GEL exchange depreciation is caused by either increasing the money supply or by decreased incomes in foreign currency.

Georgia started 2017 with improved economic performance. The economic growth rate increased from 3% to 4.5%. There are positive changes in regard to export, remittances and tourism. These changes have impacted the GEL exchange rate since January and by July-August 2017, the rate has appreciated by GEL 0.4 (as compared to January 2017).

What has been happening in September and why did the GEL depreciate?

If we take a look at the statistics of the past years, we will see that depreciation of the national currency usually happened at the end of the year. Therefore, the Minister’s statement, that GEL depreciation could be caused by seasonal factors, is not a groundless claim. Traditionally, the biggest amount of tourists visit Georgia in August (576,000 tourists this year) whilst this figure decreases by 40% in September and goes further downward in October and November. This means that from the beginning of autumn, we get USD 100 million less income per month as compared to July and August. This is a significant loss for Georgia’s currency market and all things being equal inevitably results in a correction of the GEL exchange rate.

At this moment we know that in January-August, Georgia’s trade balance improved by USD 28 million, the volume of remittances increased by USD 134 million and the number of visitors is up by 29% (which stipulates increased income from tourism). These are the positive trends which contribute to the appreciation of GEL. However, we know nothing about investment and credit capital flow which is equally important and failure there might overshadow the aforementioned positive trends. Currently, we know the statistics for only two quarters vis-à-vis foreign direct investments made in 2017 according to which these investments are down by 5.5% (USD 43 million). The complete information (balance of payments) in regard to the inflow of investments and the credit capital of the third quarter will be published at the end of December as a quarterly figure (figures for three months taken together) and so we would be unable to specify the exact situation for the month of September.

The National Bank’s monetary policy rate initially increased to 6.75% in January 2017 and reached 7% later in May. The reason behind switching to a stricter monetary policy was to contain those inflationary processes which were unleashed as a result of increased excise tax and rising international prices on food commodities. 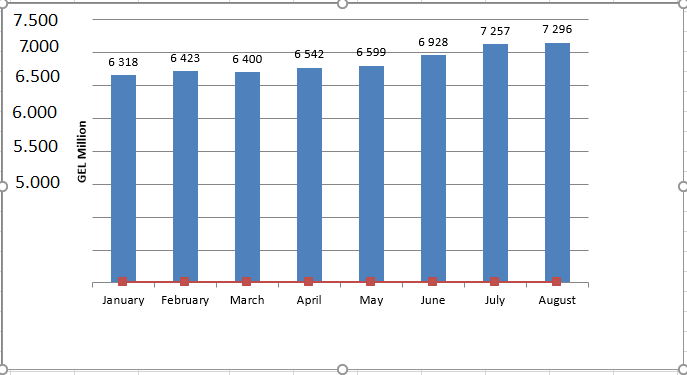 The volume of the monetary base (excluding foreign currency) increased by 22.3% in August 2017 as compared to August 2016. In the last months, the Government of Georgia’s operations significantly contributed to increasing the volume of the monetary base. Increasing the money supply at such a pace, in light of decreased (or even not growing) USD inflows, will play a part in the GEL depreciation. However, the GEL depreciation is not a reason for the National Bank of Georgia to change its policy because the Bank’s main priority is the level of inflation which has been on the decline for the last few months. If there is no danger of a rising level of inflation, economic growth is stimulated by increasing the money supply.

The experience of the last years clearly shows that the GEL exchange rate does depreciate from the beginning of autumn. Mostly, this is the result of the end of the tourist season. If the seasonal effect of tourism is not replaced by some other positive trends, the GEL exchange rate will continue its downward move.

Proclaiming this latest GEL depreciation as a seasonal event depends on many factors which are very hard to predict. If the current money supply of GEL remains (or increases) in the economy, if investments decline and if the decreased currency inflows after the end of the tourist season are not compensated by some other sources, then the GEL to USD exchange rate will not come back to 2.39 and might depreciate even further.

At this time, FactCheck leaves Dimitri Kumsishvili’s statement WITHOUT VERDICT and will come back to this topic again in the future.