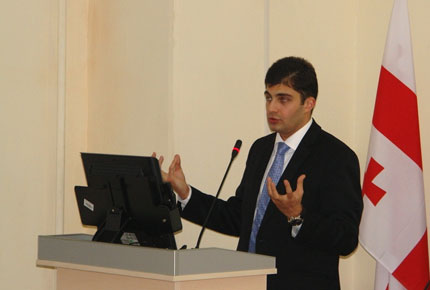 "Police officers punished for the 'Gunava case' are being promoted.”

Davit Sakvarelidze, Member of the Parliamentary Minority from the United National Movement, stated

Davit Sakvarelidze, Member of the Parliamentary Minority from the United National Movement, stated at the plenary session on 29 May 2013: “Punished and fired policemen in the 'Gunava case' are being promoted. One of them, Mirian Topuria, who compiled a protocol for the arrest of Gunava is currently a Deputy Regional Police Chief in Kakheti.”

decided to check whether or not the “punished” policemen in the 'Gunava case' were in fact promoted.

Tengiz Gunava, former Head of General Inspection at the MIA, was arrested on 16 November 2012 by the Criminal Police of the Ministry of Internal Affairs of Georgia. He was charged under Article 236 and Article 260 of the Criminal Code and arrested for the illicit purchase-possession of a weapon and illegal drug use.

Tengiz Gunava was released under bail. He considers that his arrest was illegal and the police abused their professional power. Therefore, Malkhaz Velijanashvili, Gunava’s lawyer, filed a complaint to the Prosecutor’s Office.

General Inspection at the Ministry of Internal Affairs started an investigation regarding this complaint. The investigation found out that Gunava’s arrest and search was conducted with violations. However, according to the ruling, planting of a weapon and narcotics were not confirmed. In this regard, the investigation possessed only the testimony of Tengiz Gunava. According to the same ruling, Gunava’s testimony is not sufficient evidence to assume that the policemen committed a crime.

According to the investigation, inaccurate reflection of further events following Tengiz Gunava’s arrest and search was caused, on the one hand, by the improper practice of inertia and, on the other hand, by the desire to sign the relevant documents in a more comfortable environment. The ruling concludes that there is no reason to launch a criminal prosecution of the police officers.

In addition, infringements of the requirements of the Code of Criminal Procedure in Gunava’s prosecution case do not exempt police officers from general liability.

As a result, the Prosecutor’s Office dropped the case against Gunava.

On 21 December 2012, the Ministry of Internal Affairs issued the following statement: "General Inspection has completed the inspection check of Tengiz Gunava’s detention. According to the ruling of the General Inspection, the Minister decided to fire five members from the Department of Central Criminal Police."

It should be noted that the statement did not disclose the names of those employees. We contacted Nino Giorgobiani, Head of the Public Relations Office of the MIA, who provided us with the surnames of the fired policemen. These policemen are: Tevdore Shonia, Nikoloz Arganashvili, Giorgi Bliadze, Besik Sharashenidze and Nikoloz Shatakishvili. According to Giorgobiani, these policemen are currently fired from the Ministry.

Police Division of the Criminal Police Department at the MIA. The employees of this police division have arrested Gunava.

Mirian Topuria was not personally involved in Gunava’s arrest. He compiled a report on 16 November 2013 at 02:30. According to it, Tengiz Gunava should have been in Tbilisi on the adjacent territory to Saburtalo Street No. 59 and he should have possessed narcotics and a firearm. Gunava had no right to carry the firearm. Giorgi Kikalishvili, Deputy Head of the Criminal Police Department, passed the resolution on the report. On the basis of Mirian Topuria’s report, the investigation of the Gunava case had been launched. Mirian Topuria assigned a group of detective-investigators which consisted of Besik Sharashenidze, Nika Arganashvili, Giorgi Bliadze, Tevdore Shonia and Nikoloz Shatakishvili.

Based on the information provided by Nino Giorgobiani, Head of the Public Relations Office at the MIA, Mirian Topuria indeed works as the Deputy Head of the Kakheti Regional Police. It is not true to say that he was fired from the Ministry in connection with the 'Gunava case.' Mirian Topuria has never been fired from the Ministry of Internal Affairs.

Accordingly, we rate the statement by Davit Sakvarelidze, Member of the Parliamentary Minority: “Police arrested for the 'Gunava case' are being promoted,” MOSTLY FALSE.