On 8 June 2017, at the session of the Parliamentary Minority, Movement for Freedom – European

Views: 2146
True
The statement is accurate and nothing is missing
Facebook Linkedin Twitter Print
On 8 June 2017, at the session of the Parliamentary Minority, Movement for Freedom – European Georgia MP, Giga Bokeria, addressed

the Deputy Minister of Finance: “Your predictions for economic growth have not been matched with any real results even in a single year of your rule.”

The economic growth rate demonstrates how fast a country’s real gross domestic product (real GDP) increases or declines as compared to the real GDP of the previous year. The real GDP shows the real output of the final production which was produced in a country. This is considered as the volume of a country’s economy. 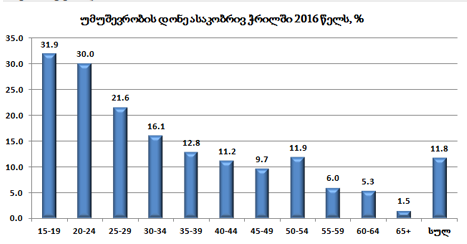 Source: Ministry of Finance of Georgia Comment: *The graph shows the real GDP growth figure for the first four months of 2017 whilst the prognosis is given for the entire year of 2017.

In 2013, the GDP’s real growth rate was significantly lagging behind (2.6 percentage points) the growth rate given in the prognosis. In 2014, the real figure was 0.4 of a percentage point below the predicated rate. In 2015, the real GDP growth figure was 2.1 percentage points behind the government’s forecast whilst the real GDP growth rate in 2016 was 0.3 of a percentage point less as compared to the rate given in the prognosis. In regard to 2017, it is too early to draw conclusions because only four months of data are available. Of note is that whilst talking about the government’s prognoses, we refer to GDP growth rate predictions which are given at the beginning of a year and based on the principal economic and financial indicators of the state budget. We do not take into account the adjusted prognoses issued throughout the rest of a year.

Of interest is the amount of loss in Georgia’s economy in 2013-2016 as a result of the failure of economic growth prognoses to come true. If the economic growth predictions had indeed materialised in 2013-2016, the real GDP in 2016 would have been approximately GEL 1.5 billion more as compared to the actual number (GEL 27 billion).

We have also seen the prognoses of the GDP growth as well as its real figures under the United National Movement’s rule in 2004-2012. Since FactCheck

was not able to obtain the economic prognosis for 2004, the following is the comparison of the real GDP growth rate to what was forecast in 2005-2012. 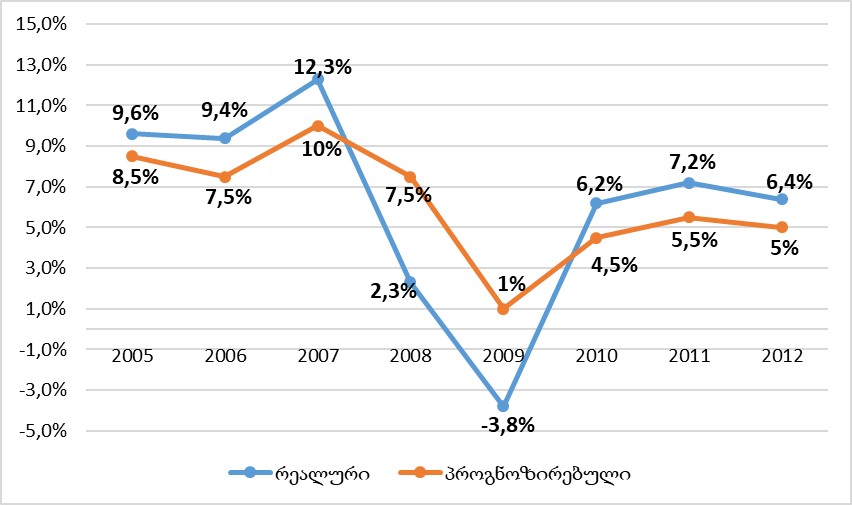 As we can see, under the United National Movement’s rule the real GDP growth rate mostly exceeded the predicated figures. Only in two cases, in 2008 and 2009, were the real economic growth numbers lagging behind the forecast figures (in 2008 by 5.2 percentage points and in 2009 by 4.8 percentage points). The poor economic performance of 2008-2009 was caused by the 2008 Russia-Georgia war and the 2009 world economic crisis which further aggravated Georgia’s economy which was already suffering from damages inflicted by the aggression.