The number of tourists from Iran increased by 227% in January-April… Our government acted stupidly when they abolished the visa-free regime with Iran for 2.5 years

on his Facebook page: “The number of tourists from Iran increased by 227% in January-April this year. The Government of Georgia acted completely stupidly when they abolished the visa-free regime with Iran for 2.5 years and, as a result, effectively killed the fastest growing tourist ties. It has been a year since the Government of Georgia rectified that mistake and Iran still continues to break records.”

Since 1 July 2013, Georgia has unilaterally suspended the visa-free regime with the Islamic Republic of Iran. The agreement about visa-free travel was signed in November 2010 and came into force in January 2011. The agreement stipulated 45 days of a preferential visa-free stay for citizens of Georgia and Iran to travel to the respective countries. Some political commentators asserted that the “temporary suspension” of the visa-free regime was a result of the pressure exerted by the USA and Israel on Georgia whilst other experts believed that the reason behind the suspension of the visa-free regime with Iran was the isolationist policy of the Government of Georgia. In this context, of interest is that Georgia abolished

its visa-free regime with 24 other countries beginning on 1 September 2014. Apart from this amendment, the duration of stay in Georgia was slashed from 360 days to 90 days for those citizens with whom the country maintained a visa-free regime.

The visa-free regime for citizens of Iran has been reinstated

since 15 February 2016 and Iranian citizens are once again allowed to enter Georgia without visas and stay for 45 days after their visa-free entry date.

also took interest in the specifics of the number of Iranian visitors from 2011 to the first four months of 2017.

Total Number and Growth Rate of Visitors from Iran 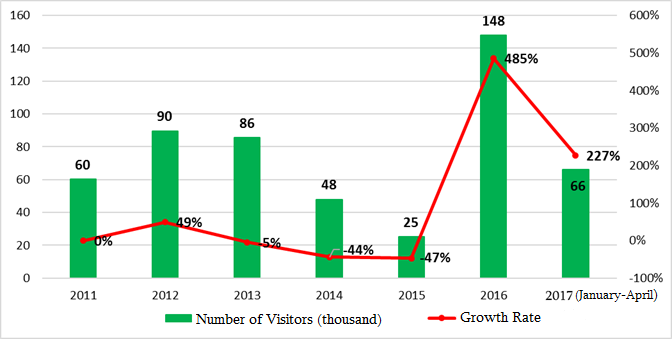 We can see that the sharp decline in the number of visitors coincides with the time of the abolition of the visa-free regime. Of note is that we must also differentiate the notion of tourist vis-à-vis visitor. The statistical information given above includes information about visitors in general. The term visitors include all three types of visits: people who stay more than 24 hours in the country – tourists, people who use the country for transit and people who are visiting for one day.

Of additional note is that the sharp fluctuation in the number of visitors, apart from the abolition-reinstatement of the visa-free regime, might be caused by other factors as well. Of these factors, one of the most important could be Iran’s economic growth rate from 2011 to the present day because the economic well-being of Iranian citizens is directly related to their willingness and ability to travel.

In January 2016, the USA and Europe abolished the sanctions on Iran which were imposed in 2005. The report published by the International Atomic Energy Agency highlighted that Iran fulfilled all of the programmes required for freezing its nuclear programme and Iran’s compliance in this regard was used as the basis to abolish the sanctions. As a result, Iran obtained access to approximately USD 50 billion which was previously blocked. Obviously, the abolition of the sanctions positively affected Iran’s economic situation.

Changes in the Gross Domestic Product of Iran (%) 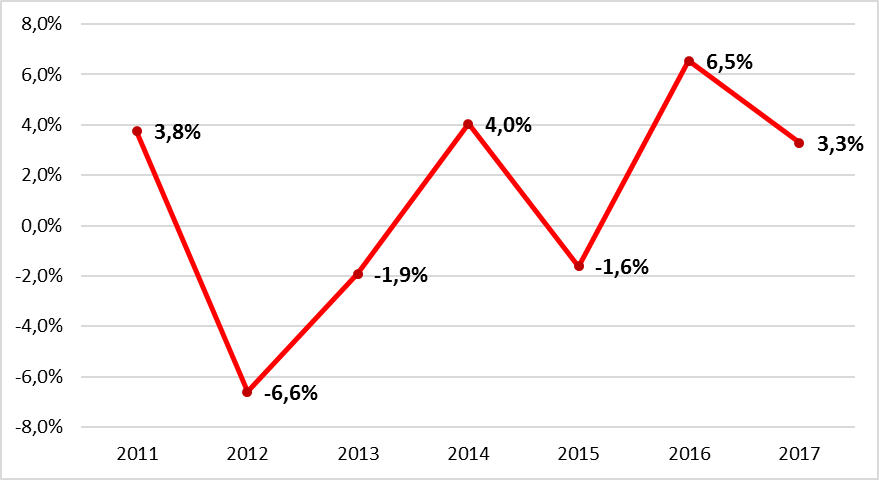 Additionally, it is natural to assume that citizens of Iran have been learning more and more about Georgia and the opportunities to travel here. Therefore, this growing interest has also affected the number of Iranian visitors to Georgia.