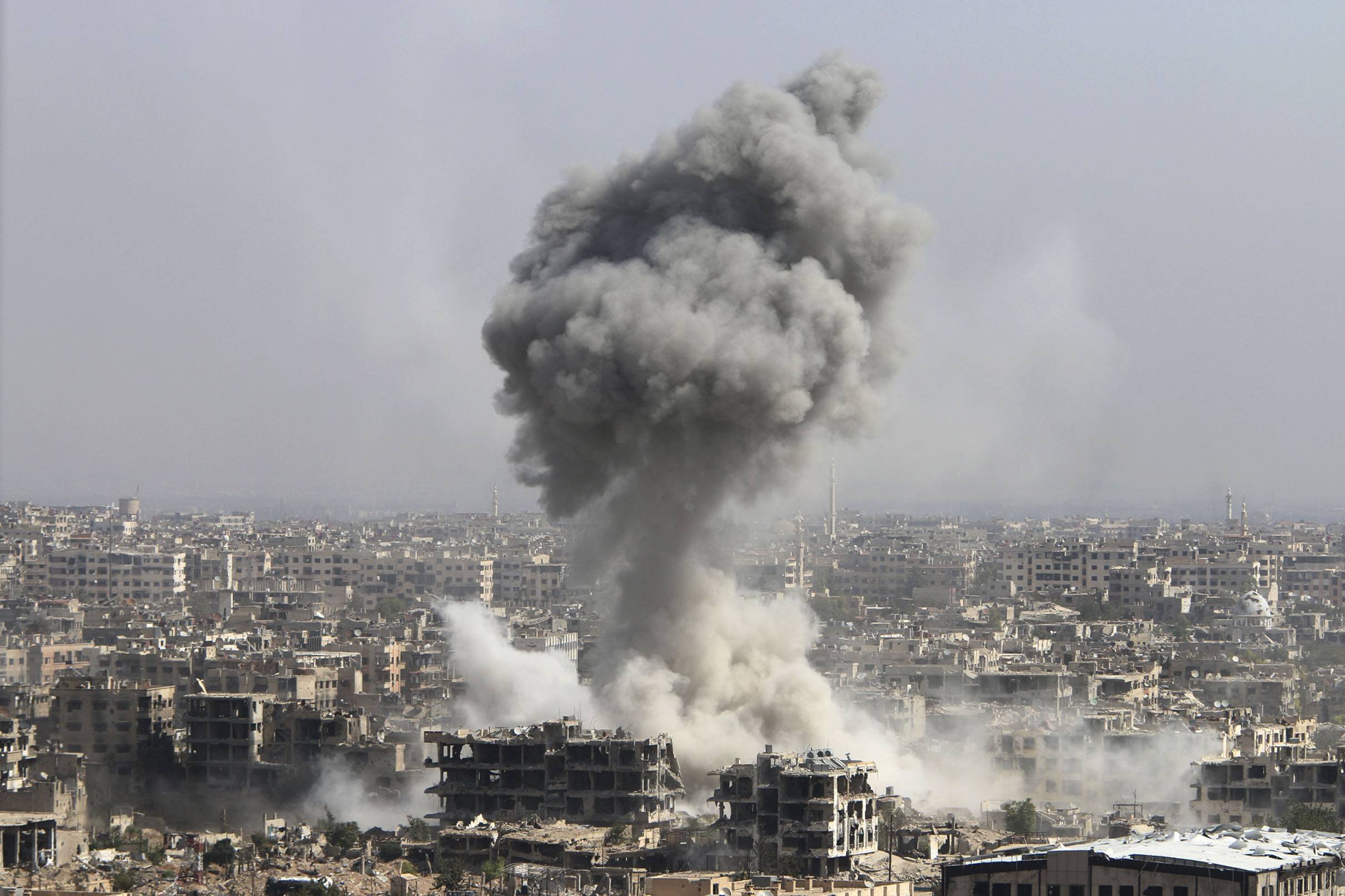 UN investigator says that on 4 April 2017, the majority of casualties died not by chemical but by conventional bombs

of Euronews. Both the latter and the Georgian media outlet have used the UN representative’s 21 April statement which indicated that the majority of persons killed during the multi-year Syrian conflict were casualties of conventional and not chemical weapons and incorrectly connect this statement to the chemical attack perpetrated on 4 April in Idlib province, thereby creating a false impression. The opinions of Sérgio Pinheiro, the aforementioned UN representative, which were voiced at a conference on 21 April have been wrongly interpreted.

entitled “UN Investigator:  Majority of Casualties in Syria died not by Chemical but Conventional Bombs.” This article says that according to the UN investigator’s statement, on 4 April 2017, in Idlib province, the majority of persons were killed by conventional bombs and not by chemical weapons. The article also includes information about Paulo Sérgio Pinheiro’s statement: “The interim results of the investigation indicated that an air assault was carried out by conventional bombs as well with the assault repeated a couple of hours later, targeting the hospital.”

Both the structure and the content of the Marshalpress

article give rise to plenty of questions:

As we have already mentioned, the article refers to an air assault

carried out on 4 April in Syria’s Idlib province which killed 80 civilians, including children. On the same day, hospitals where the injured were receiving medical treatment were also subject to airstrikes.

Also on the same day, upon the basis

of the statements of witnesses, journalists and doctors, assumptions were made that a chemical weapon; specifically, poisonous sarin gas, was used in Idlib.

After the 4 April air assault, the Doctors without Borders organisation made a statement

which said that according to medical personnel, patients’ symptoms are consistent with exposure to a neurotoxic agent such as sarin gas.

Another statement in regard to the Idlib air attack was made on 19 April 2017 by the Organisation for the Prohibition of Chemical Weapons (OPCW) which confirms that sarin or a similar poisonous substance had indeed been used in Idlib. The OPCW studied tissue samples of three of the casualties and seven injured individuals and made the aforementioned statement

upon the basis of their laboratory analysis.

The Turkish side, under the guidance of the World Health Organization, conducted a laboratory study on the bodies of the victims and also confirmed the use of sarin gas. Furthermore, France’s intelligence agencies published an unofficial report

based on the study of evidence taken from the city of Khan Shaykhun and concluded that a chemical attack was carried out using sarin.

In the process of our verification of Marshalpress’s information, FactCheck found out that Paulo Sérgio Pinheiro has been the Chairman of the Independent International Commission of Inquiry for Syria under the auspices of the UN, investigating violations of international human rights and identifying the perpetrators, since 2011. The latest press release published by Mr Pinheiro’s Commission says that the Commission investigated the 4 April attack in Idlib as the alleged use of chemical weapons as well as airstrikes targeting medical facilities. At a press conference on 21 April 2017, Mr Pinheiro did indeed speak about Syria. He stated that an investigation was underway with a focus upon the alleged use of chemical weapons such as sarin or other similar poisonous gases. He also mentioned that the majority of casualties in the Syrian conflict were killed by conventional weapons. In this case, Mr Pinheiro is referring to the war in Syria which has been in an active phase since 2011 but he does not comment upon the 4 April attack specifically. However, in the Marshalpress article, his statement is linked to the 4 April air assault. At the same time, Mr Pinheiro’s Commission has not yet published its findings in regard to this particular attack contrary to what is asserted in the Marshalpress

article. The aim of the article is to make readers doubt the use of chemical weapons in Idlib province, likely employed by the government of Bashar al-Assad (as claimed by many trusted sources).

Of additional note is that the photograph accompanying the article has no relation to the content. The photograph’s caption, “US Airstrikes Kill Four Civilians,” is not even slightly relevant to the information given in the article but serves to confuse the reader and negatively portray the West.

Further, Marshalpress frequently publishes anti-Western and manipulative news and ended up in both the 2014-2015 and 2016 reports of the Media Development Foundation as a result. Transparency International Georgia has conducted research in regard to Marshalpress

owners and identified that the online outlet maintains a partnership with different pro-Russian media sources.

The Georgian Public Broadcaster has published information similar to the Marshalpress article, reportedly without prior verification.
თეგები: