On 30 March 2017, National Statistics Office of Georgia published the economic growth figures of

Views: 2765
Mostly False
In the statement is the elements of the truth, but the important facts that could have made other impressions
Facebook Linkedin Twitter Print

Upon commenting this statistical data, a member of the United National Movement, Roman Gotsiridze stated:

“The economic growth rate of 4-5% is because of a very low economic growth rate in the previous year. Last year was the nadir of economic decline and as compared to that decline this year’s figures constitute a growth. However, if we take a look at the dynamic of GDP growth rate of the last four years, it is so negligible that it has zero impact upon the reduction of the poverty or unemployment rates in the country.” 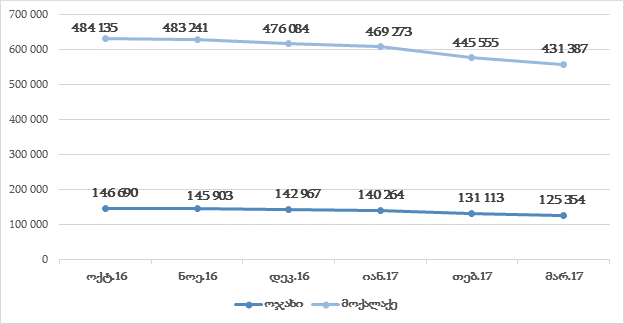 was 4.4%. The economy of Georgia grew by 4.8% on average in January-February.

The foreign trade statistics of January-February, which is one of the driving forces behind the growth of economy, also indicate the positive trends in Georgia’s economy this year. According

Of note is that the last years’ average 3.4% economic growth rate is not a big enough figure for a country of a developing economy and even if the country manages to keep the economic growth rate at 4-5% it would not be sufficient to significantly curb unemployment and reduce poverty in a short period of time. FactCheck has written on that topic

before. However, this does not mean that even low economic growth rate has no positive impact upon slashing the rates of unemployment and poverty. Perhaps, the pace of employment and growth and poverty reduction is not fast enough, though according to the National Statistics Office of Georgia the situation is still getting better in that regard.