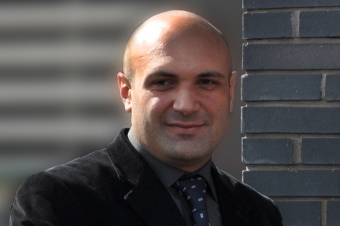 During his interview with the Top News agency, United National Movement member and Majoritarian MP

took interest in this issue and looked into it.

We contacted Giorgi Tevdoradze who told us that the United National Movement asked the Lado Meskhishvili Kutaisi State Dramatic Theatre to allocate space for their party meeting at any time from 14-30 November 2015. There was a verbal agreement between the then Director of the Theatre, Tamar Lortkipanidze, and the United National Movement according to which the party would be paying GEL 3,000 in rent. The theatre refused the deal three days later, citing a busy schedule of performances and rehearsals.

According to Giorgi Tevdoradze’s statement, over a thousand people were expected to attend the party conference and this was the reason why they needed a big venue. In the same period, the United National Movement also requested space at the Sports Palace for its party conference; however, this time they received a refusal from City Hall. The reason given for the refusal was a busy schedule of sports activities. The response letter from City Hall, signed by the Head of the Administrative Service, Zviad Javakhia, offered the city’s central stadium to the United National Movement for its party conference.

The administration of the Lado Meskhishvili Kutaisi State Dramatic Theatre indicated that last November and December were busy months for the theatre as it always is at the end of the year. They had premieres, planned performances and visits from several Georgian theatres on tour. The information about the performances and premieres held at the theatre can be found on their website. The theatre hosted a play, Cucaracha, from 3-24 November as well as another production, Open Glass Gallery. The stage was also occupied on 10, 11 and 12 November by the plays Hellados, Summer Night’s Dream and Pic Nic. The small stage hosted Cylinder and Love Collection on 19-20 November whilst a premiere was planned for 12-26 November. Irakli Samsonadze’s Fisherman…One…Two… premiered on the theatre’s main stage on 26-27 November. There were no plays planned for 28-29 November whilst Eva Khutunashvili and Nino Sadgobelashvili’s one-act installation, The Countdown to Infinity has Started,

was also shown at the theatre on 30 November. The schedule clearly shows that there were no plays on the theatre’s main stage in the period from 13-25 November; however, according to the administration’s statement, lengthy pre-premiere rehearsals were taking place on the stage during this period.

During his conversation with FactCheck,

Giorgi Tevdoradze also pointed out that they have had problems with renting other facilities as well beginning from 2013 – namely the Balanchivadze Kutaisi Opera Theatre. According to his statement, United National Movement member, Gigi Tsereteli, addressed the Opera Theatre’s administration in order to book the facility for a meeting planned on 27-28 August. Mr Tsereteli was told that they would be unable to offer the desired space due to rehabilitation work.

that they were rehabilitating the facility’s lavatories. According to the statement of the Director of the Opera, Tornike Marjanishvili, the internal rehabilitation work was absolutely necessary at that point. A total of 20 days were allocated for the rehabilitation.

As for the allocation of venues for the governing party’s gatherings, the Kutaisi Municipal Organisation of the Georgian Dream – Democratic Georgia’s party conference was held at the Lado Meskhishvili Kutaisi State Dramatic Theatre on 26 February 2016. If we look at the theatre’s schedule, it is clear that the stage was free from 25 February 2016 and no plays were planned for the upcoming month. No lengthy pre-premiere rehearsals, which could have occupied the stage and prevented the governing party from holding their gathering at the facility, were taking place at the theatre at that moment.

Conclusion The materials studied by FactCheck show that Giorgi Tevdoradze’s statement that the Lado Meskhishvili Kutaisi State Dramatic Theatre did not give them its venue for the party gathering is indeed true. The reason stated for this was the theatre’s busy schedule. As for the Opera, it difficult to ascertain whether or not the actual reason for the United National Movement’s refusal was the rehabilitation work planned by the administration. FactCheck

was also unable to find the November 2015 schedule for the Kutaisi Sports Palace and check whether or not the reason for the refusal from Kutaisi City Hall was indeed the busy schedule at that time.

Despite the facts we learned, it is difficult to determine that the United National Movement’s refusal of the venues had political motivations. Hence, FactCheck leaves Giorgi Tevdoradze’s statement WITHOUT VERDICT.
თეგები:

Ministry of Finance of Georgia