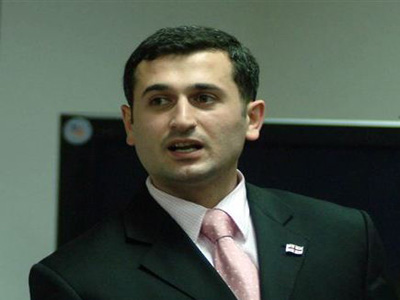 A member of the United National Movement and the party’s majoritarian candidate in Rustavi, Davit

A member of the United National Movement and the party’s majoritarian candidate in Rustavi, Davit Kirkitadze, talked about the stoppage of the construction of bicycle lanes in Rustavi in his campaign video and stated: "Rustavi has huge potential for having bicycles as the most popular means of transportation in the city. Unfortunately, Rustavi’s leadership stopped the construction of bicycle lanes like [they have stopped] everything else."

asked the Head of the Infrastructure, Construction and Improvements Service of Rustavi City Hall, Aleksi Navrozashvili, for a comment in regard to the aforementioned issue. According to Mr Navrozashvili’s statement, the construction of bicycle lines has already been completed in the vicinity of the N2, N4 and N6 blocks of Leonidze Street. He also said that the Rustavi Municipality does not insert detailed information concerning work activities into the agreements which explains why there is no specific indication concerning the construction of bicycle lanes. According to Mr Navrozashvili’s information, construction work on paved brick-coloured pedestrian paths is ongoing on certain streets. The brick-coloured paving will designate cycling paths.

FactCheck took interest in whether or not bicycle lanes are being constructed in the vicinity of blocks N2, N4 and N6 of Leonidze Street. We learned that a section of the sidewalks close to the aforementioned blocks is indeed paved in a different colour (see the link).

However, there are no special drawings or additional signs which might indicate that this part of the sidewalk is for cycling.

In regard to Meskhishvili Street and Megobroba Avenue in Rustavi, the construction work is indeed ongoing. Of note is that Rustavi City Hall has published visual materials about the ongoing work at 1 Megobroba Avenue on its own website. The photographs illustrate that only pedestrian paths (and not bicycle lanes) have been constructed (see the link).

Of additional mention is that work on bicycle lanes in Rustavi was carried out on a larger scale under the previous government. A bicycle lane from the entrance of the city up to Shartava Street and Megobroba Avenue was almost completely constructed (see the link). Conclusion According to the information of Rustavi City Hall, bicycle lanes were constructed in front of blocks N2, N4 and N6 of Leonidze Street after 2012. At the present moment, work is ongoing in two sections of the city where Rustavi City Hall stated that bicycle lanes will be constructed. Of these two sections, only a pedestrian path is being constructed at 1 Megobroba Avenue whilst construction work is in its initial phase on Meskhishvili Street which makes it difficult to say whether or not a bicycle lane will be put in place there. Additionally, the construction of bicycle lanes is not specified in any contracts. FactCheck

will come back to this issue in the future as well.