On 23 June 2016, during his meeting with supporters, leader of the New Georgia political party,

On 23 June 2016, during his meeting with supporters, leader of the New Georgia political party, Giorgi Vashadze, stated: "Kutaisi is the second biggest city in Georgia and is number one in terms of the unemployment rate."

Employment data in Georgia is compiled and registered by the National Statistics Office of Georgia. Additionally, different NGOs working on the topic periodically publish public opinion polls about employment issues. 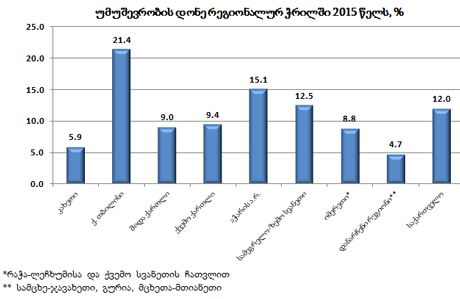 contacted Giorgi Vashadze to ascertain the facts and asked him to clarify what data he used to make his statement. According to Mr Vashadze, he made the statement based upon the reports of the National Democratic Institute (NDI) and the International Republican Institute (IRI) which were published in the period of the local elections in 2014.

According to NDI’s survey, which was published one month before the local elections in April 2014, voters named unemployment as the most important

national issue. However, in its public opinion survey, NDI did not conduct separate research in terms of the unemployment rate in specific Georgian cities and towns.

In the research prepared by NDI which was published in August 2015, the surveyed respondents from different Georgian cities assessed the existing employment perspectives in their own cities. Of the surveyed people in Kutaisi, 92 believed that their place of residence has inadequate employment opportunities. In this regard, Kutaisi and Gurjaani were both in the first place among Georgian cities as concerns employment opportunities.

Another question from NDI’s research is as follows: Do you consider yourself employed? According to the answers received, 58% of Kutaisi residents considered themselves to be unemployed. At the same time, of that 58%, 48% is able to work and is looking for a job. The research illustrated that Zugdidi (68%) and not Kutaisi was in the first place in terms of people regarding themselves as unemployed.  Zugdidi was followed by Tbilisi (64%), Akhaltsikhe (63%), Ozurgeti (60%) and Gori (59%). Kutaisi was in the sixth place in the ranking.

In regard to the data from IRI’s 2014 research, the organisation’s Georgian office informed FactCheck that they have not included the issue of unemployment in their research. This issue was included in their public opinion survey

conducted in 2015-2016. However, the results of the research were summarised on a national scale and not in terms of individual cities and towns. Therefore, it is also impossible to assess the unemployment rate in Kutaisi using IRI’s data.

Our research demonstrated that there are no official data in regard to Kutaisi’s place among other Georgian cities in terms of its unemployment rate. According to the National Statistics Office of Georgia, the Imereti region in in the seventh place in terms of the country’s unemployment rate. As indicated by Giorgi Vashadze, his statement was not based upon official data but upon the results of public opinion surveys conducted by the National Democratic Institute and the International Republican Institute. However, that research illustrates the attitude of the population of different Georgian cities in regard to employment prospects in their own cities and whether or not the surveyed respondents consider themselves to be employed.

According to NDI’s public opinion survey, of those surveyed in Kutaisi, 92% believes that their place of residence does not offer adequate employment opportunities. In this regard, both Kutaisi and Gurjaani were ranked first among Georgian cities. However, according to the research question of whether or not the respondent considers himself to be unemployed, Kutaisi is in the sixth place in terms of the perception of unemployment.

Naturally, unemployment is a very serious problem both in Kutaisi and throughout the country. However, the fact named by Giorgi Vashadze cannot be proven.