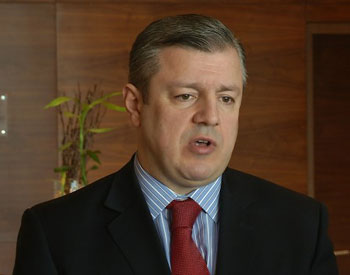 There is no link whatsoever between the new school subject, Me and Society, and any pseudo-traditionalist speculations about its content

The Prime Minister of Georgia, Giorgi Kvirikashvili, at one of the sessions of the Government of

The Prime Minister of Georgia, Giorgi Kvirikashvili, at one of the sessions of the Government of Georgia, declared his support for the Minister of Education and Science, Tamar Sanikidze’s, effort to introduce a school subject called Me and Society in public schools throughout Georgia. The Prime Minister stated: "Allegations and insinuations about pseudo-traditionalist values are completely unacceptable for us. There is no link between this subject and those speculations." According to the Prime Minister’s assessment, it is nothing but positive to teach and develop the sense of responsibility in your compatriots from an early age.

studied the topic of the introduction a new school subject.

The new school subject, called Me and Society, is a part of the National Teaching Plan and the Ministry of Education and Science intends to include this subject as a component of the teaching process from the 2016-2017 academic year. This will be a compulsory school subject for third and fourth grade pupils.

The development of a standard for teaching this new school subject is the result of several factors. For instance, some pressing issues (family, school environment, society, state and citizens) were not properly integrated within social sciences classes for pupils in the first to fourth grades. Furthermore, values deemed as priorities for the educational system as well as the Georgian Constitution were not emphasised in classroom work. Additionally, research into international educational practice showed that numerous countries have already adopted this new standard of teaching some time ago.

The new Me and Society subject will be taught for two hours per week in the third and fourth grades. The subject will introduce pupils to Georgia’s social environment through an analysis of various day-to-day cases. According to the clarification of the Ministry of Education and Science, both local teachers and representatives of different international organisations (for example, the United Nations Population Fund, to promote healthy lifestyles, and the United Nations Women’s Fund, to promote human rights and gender equality, in parallel with PH International and other invited experts) were involved in the preparation of the teaching standard. Additionally, meetings were held with the teachers of early-stage education and civil education as well as with representatives of non-governmental organisations.

Businessman, Levan Vasadze, and his supporters adamantly oppose the introduction of the new school subject in public schools. Mr Vasadze believes that the subject is dangerous and unacceptable and stated: "The teaching hours for this subject come at the expense of such important school subjects as Mathematics, Chemistry, Physics, Music, Visual Arts, Sports and others." Hefurther asserted that the aforementioned initiative was pushed forward by foreign NGOs and it represents a direct threat to the development of our children.

In February 2016, philologist, Guram Palavandishvili, issued a statement accusing the Ministry of Education and Science of supporting "the advertising of vices" and "introducing textbooks of an evil ideology." As proof, Mr Palavandishvili named the books Compass and Compassito

and the ideas displayed therein (sex and homosexuality, non-traditional family and gender, etc). According to the rhetoric of his statement, the textbooks written upon the basis of such a tragedy and "under the disguise of tolerance and the forbearance of differences" threaten us with a “mingling of nationalities, cultures, faiths and sexes."

Guram Palavandishvili addressed the Parliament of Georgia with a petition to ban the introduction of the new subject in public schools. Some well-known public faces also signed the petition. However, some of the signatories later clarified that they were unaware of the petition’s content and signed it only after receiving the request from Mr Palavandishvili.

The Ministry of Education and Science issued an official reply to Guram Palavandishvili’s statement: "Guram Palavandishvili, purposely and with the aim to deceive the public and discredit the educational system, states that the Ministry of Education and Science, pursuant to the EU’s directive, is planning a massive assault against our children from September. However, as proof of the ‘appalling’ objective, the author names excerpts from a source which was translated by one NGO in 2004 for the purpose of informal education and which is not from the Ministry of Education and Science’s National Teaching Plan. We would also like to underline that the social sciences component of the Ministry’s National Teaching Plan has nothing in common with the aforementioned publication or the citations inserted in the article. Additionally, both common sense and logic show that there are no links between the statements of Mr Palavandishvili and the actual content of the new textbook and there are no threats to public interests."

The books Compass and Compassito

deal with issues of human rights. They address topics like citizenship, democracy, discrimination, studying and free time, environment, family and alternative care, gender equality, sexuality (including homosexuality) and racism, etc. However, the books and the issues they focus upon have nothing to do with the new school subject and have never been parts of the National Teaching Plan.

in the upcoming days. The lesson plans include the following topics:

Each of these topic includes several key concepts. For instance: norms and mores, ancestors, school, safety, rights/obligations, responsibilities, norms and behaviours and tolerance, etc. Of note is that the topics mentioned in the petition circulated by the initiative group are not the same as those given in the teaching standard.

The Ministry of Education and Science told FactCheck

that the approval process to publish a textbook for the new subject has not yet been announced. Furthermore, it is unknown whether or not there is sufficient time to include the new school subject in the 2016-2017 academic year.

The Ministry of Education and Science plans to introduce a new subject, called Me and Society, throughout the country’s public schools within the framework of the National Teaching Plan. The new subject will be taught for two hours per week in the third and fourth grades. The subject will introduce pupils toGeorgia’s social environment through an analysis of various day-to-day cases with an emphasis made upon public issues. The textbook for the new subject has not yet been prepared. Assertionshave been made (Levan Vasadze and Guram Palavandishvili and their supporters) opposing the introduction of the subject because the topics it includes as well as the envisaged textbook would threaten the "development of our children." However, these assertions are unsubstantiated.