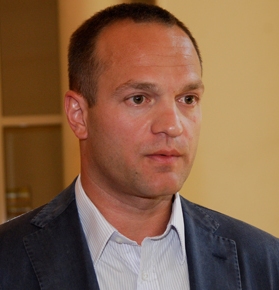 On air on Imedi TV the United National Movement MP, Petre Tsiskarishvili, discussed Georgia’s economic conditions. According to the MP, the recently stabilised exchange rate of the Georgian national currency is mainly due to the decrease in the amount of GEL in circulation as well as a drop in imports. The amount of GEL in the economy (according to the M2 indicator of money flow) has decreased by 300 million whilst the purchasing power of the population with regard to imported goods has dropped by USD 1 billion.

GEL reached the peak of its depreciation on 28 January 2016 (USD 1 = GEL 2.4985) and started strengthening afterwards. It appreciated by two tetri in February, by 11 tetri in March and by 14 tetri

The GEL exchange rate is determined by the demand and supply of GEL and USD on the currency market. However, the demand and supply on GEL and USD is how the exchange rate is formed. It is not a factor concerning the depreciation or appreciation of the currency. The factors influencing the exchange rate are those economic or non-economic categories which form the balance of demand and supply on various currencies. Specifically, these are the categories which determine the supply of GEL and USD to the market as well as the demand on these currencies. These factors include:  influx and outflow of foreign currencies (balance of payments – external trade, foreign investments, money transfers, tourism and external loans), monetary policy (amount of GEL in circulation), fiscal policy (the influences of the state budget), the attitudes of investors and the population towards the economic processes ongoing in the country, trust in the national currency and the economic growth rate. Consequently, it is almost impossible to determine the specific roles of any individual factor in the depreciation of GEL. In general, however, we can outline the factors which have been positively influencing the GEL exchange rate over the past few months.

The greatest reason for the outflow of foreign currency from Georgia (accounting for the outflow of USD 7.4 billion in 2015) is the consumption of imported goods. Hence, Georgia has a negative external trade balance as imports are several times larger than its exports. In order to avoid the outflow of foreign currency in quantities which exceed the influx, it is necessary for other sources of foreign currency (tourism, money transfers, investments and loans) to balance the deficit. Georgia’s external trade deficit was USD 3.5 billion in 2013. Exports started to drop at the end 2014 whilst imports remained on the rise. Hence, the external trade deficit grew to USD 4.3 billion. Exports continued to decrease in 2015; however, imports soon followed suit which kept the deficit at the level of USD 4.3 billion. Exports decreased by USD 952 million in 2015 whilst imports fell by USD 930 million. Both imports and exports continued to decrease in 2016. Exports dropped by USD 60 million from January to March 2016 whilst imports fell by USD 300 million (excluding the value of the medicine necessary for the treatment of hepatitis C which qualifies as an import but is given to Georgia free-of-charge). In total, the country’s imports have decreased by over USD 1 billion over the past year.

External Trade Balance in the First Quarter of the Year, USD Million

Why did imports decrease? The floating exchange rate (which Georgia has) projects the external shocks on the exchange rate of the currency. If less foreign currency is entering the country, the GEL exchange rate drops given that everything else stays the same. The depreciation of GEL makes imports more expensive. As a result we get an improved trade balance which decreases the pressure on the national currency. Hence, the negative pressure from external trade on GEL has decreased. In these conditions, external factors will only serve the strengthening of GEL if there is growth in tourism, foreign investments and external loans.

The amount of GEL in circulation and the demand on it (necessity) has a serious influence upon the GEL exchange rate. The expectations of the population have a large influence upon demand; specifically, whether or not people expect a depreciation or an appreciation of the currency. However, in the case of any kinds of expectations, the drop in the amount of GEL in circulation positively influences the exchange rate, especially so in Georgia where 70% of goods are imported. The decrease in the amount of GEL lowers the purchasing power of the population, thereby effectively also decreasing imports.

The National Bank of Georgia began raising the monetary rates in February 2015 with the aim of decreasing the amount of GEL in the economy. The rate grew from 4% to 8% in just one year. The monetary rate is the minimum amount of interest for loaning GEL to commercial banks. If the loans received by commercial banks are higher every time, the interest rate on the loans distributed by these banks increases as well which negatively influences the amount of GEL in the economy. If the loans in GEL were still increasing in 2015, the amount of loans distributed in GEL began to drop from January 2016. This was also caused by the decrease in the amount of domestic loans taken by the state. The state’s domestic debt grew by just GEL 28 million from January to April 2016 whilst this number was GEL 221 million in the same period of the previous year. 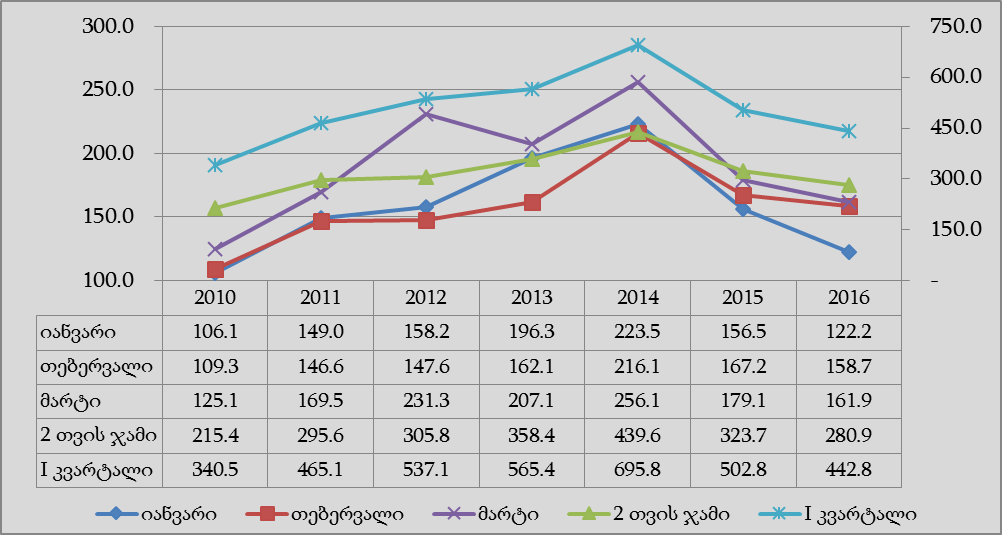 A decrease in imports and keeping the amount of GEL at the same level for one year (effectively freezing it) are the most important factors influencing the appreciation of the GEL exchange rate. However, growth in the tourism sector also has a positive influence upon the appreciation. The number of visitors entering Georgia grew by 15% in the first quarter of 2016 whilst the number of tourists grew by 16%. Georgia received a total of USD 306 million in revenues from international tourism in the first quarter of the previous year. If we assume that the income from tourism has grown by at least 16% in the first quarter of 2016, we will be getting USD 49 million more in absolute numbers. Tourism grew by 20% in April as well.

In addition, despite the fact that exports and money transfers are still less than they were in the same period of the previous year, we have had a trend of growth in these sectors as well for the past few months. Exports from Georgia amounted to USD 122 million in January whilst in March this number reached USD 165 million. Money transfers amounted to USD 67 million in January whilst in March they grew to USD 91 million. The amounts of foreign direct investments and external loans to Georgia are unknown as of yet; however, we know that the state’s external debt grew by USD 108 million from January to April 2016. Attracting external loans has a positive influence upon the GEL exchange rate.

In addition, the trend of an appreciation of the GEL exchange rate has changed expectations from negative to positive which has contributed to the stability of the exchange rate. It should be noted that the National Bank was forced to buy USD 95 million in the past two months in order to avoid an overly fast strengthening of the national currency.

According to the data of the first quarter of 2016, the drop in imports has played the most significant role in the appreciation of the GEL exchange rate from all of the external factors. Among the internal factors, the tightened monetary policy has had an important influence as a result of which the amount of GEL in circulation initially decreased and then froze in the past few months at the level of the previous year.

However, the growth in tourism, external loans and improved expectations towards the exchange rate on the part of the population have also played an important role.

FactCheck will go back to the issue of the appreciation of the GEL exchange rate after the statistical data of the past few months are fully published. At this stage, however, we conclude that Petre Tsiskarishvili’s statement is MOSTLY TRUE.
თეგები: