In the first three months of 2016, the number of international visitors grew by 14.7%

On 4 April 2016, the Minister of Economy and Sustainable Development of Georgia, Dimitri

On 4 April 2016, the Minister of Economy and Sustainable Development of Georgia, Dimitri Kumsishvili, discussed tourism statistics. As he stated, the number of international visitors increased significantly in March of this year. Mr Kumsishvili made emphasis upon the income from tourism and noted that Georgia received USD 2 billion in income from tourism in 2015 whilst this amount has increased by GEL 148 million so far in 2016.

According to the data of the Georgian National Tourism Administration, the number of international visitors[1]

Top Five Countries in Terms of Rising Number of Tourists

According to the data of the National Bank of Georgia, tourism incomes increased by 8.3% in 2015 and reached USD 1.9 billion. The National Bank has not yet published the data of the first quarter of 2016 and, therefore, it is currently not possible to assess the extent to which tourism incomes have increased. According to the information of the Georgian National Tourism Administration, the total amount of transactions made by foreign bank cards was GEL 219 million in the first two months of 2016 which is GEL 47 million more as compared to the same period of the previous year. Additionally, we can assume that tourism incomes have increased as well in parallel with the increased number of visitors. 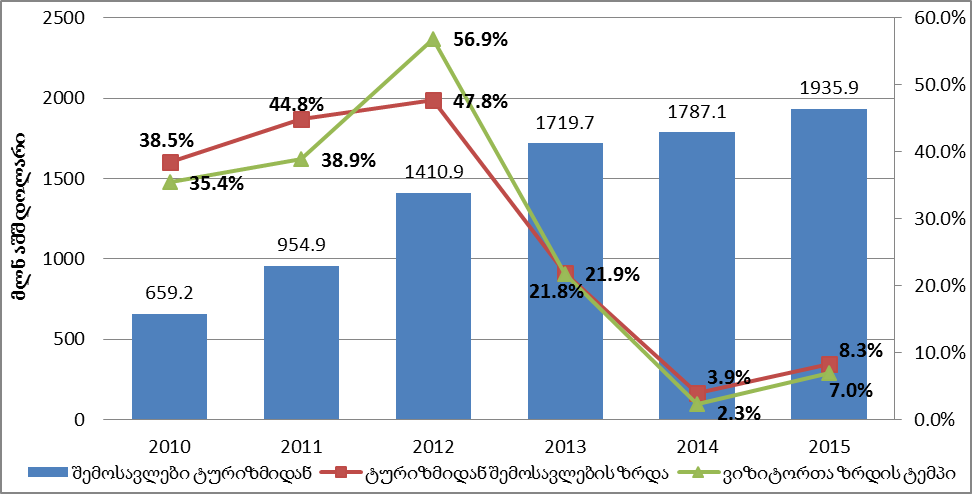 Of important note is that the introduction of the visa-free regime with Iran on 15 February 2016 has significantly affected the growth in the number of visitors. For example, the number of visitors from Iran increased twelvefold in March 2016 and reached 13,651. Of additional mention, too, is that the Government of Georgia started to introduce stricter visa regulations beginning from September 2014 which had a significantly negative impact upon the number of visitors and tourists coming to Georgia. After approximately one year, the Government of Georgia admitted that the policy was an error and started to improve the situation through the simplification of visa regulations by legislative means.

In 2016, the number of international visitors increased by 14.7% and reached 1,134,436. The number of tourists (visitors who spend more than 24 hours in the country) amounts to 35.6%. Together with the increased number of visitors, tourism income has presumably also increased. However, as the National Bank of Georgia has not yet published the balance of payments statistics, it is currently not possible to make an accurate assessment. Of particular note is that the volume of transactions made by foreign bank cards in the period of January-February 2016 increased by GEL 47 million as compared to the same period of the previous year. Additionally, after the termination of the visa regime with Iran, the number of Iranian tourists has also increased significantly.

FactCheck concludes that Dimitri Kumsishvili’s statement is TRUE. ______________ [1] A visitor is an individual who travels from his place of residence to a certain destination and stays there for less than one year and is not employed. A visitor who spends at least one night in a certain place is qualified as a tourist.