According to the report of the World Bank, Georgia’s ratings have improved and reached a record level for the past 18 years

According to the statement of the Prime Minister of Georgia, Irakli Gharibashvili: "In line with

According to the statement of the Prime Minister of Georgia, Irakli Gharibashvili: "In line with the 2014 report of the World Bank, the environment in the fields of government effectiveness, corruption level, transparency, rule of law and media freedom was positively assessed last year. This is a record level for the past 18 years which has never been reached by our country before."

Worldwide Governance Indicators represent summarised data about the views of businesses, citizens and experts concerning the quality of governance in a country. The study employs six main indicators to assess the quality of governance: freedom of expression and accountability, political stability and the eradication of violence/terrorism, government effectiveness, level of regulations, rule of law and corruption control. The study is being prepared by the President of the Natural Resource Governance Institute and Senior Fellow at the Brookings Institute, Daniel Kaufmann, as well as by an economist at the Development Research Group at the World Bank, Aart Kraay.

The study analyses the indicators of over 200 countries.

The Worldwide Governance Indictors study used to be conducted every two years from 1996 to 2002 but has been implemented annually since 2003. Parallel to the criticism towards this study (problems in measuring good governance, the incomparability of the data, the assessment of different countries using different sources and so on), its results are still considered to be a valuable source of information. The 3 June 2010 Directive No. 376 of the President of Georgia on the Endorsement of the National Anti-Corruption Strategy of Georgia indicates the aforementioned indicators among the criteria for assessing the quality of a country’s governance. The aforementioned methodology

was prepared by the World Bank Development Research Group Macroeconomics and Growth Team. Despite this, the study does not represent the official position of the World Bank and is not used in making decisions about the allocation of resources.

The most recent Worldwide Governance Indicators study was published on 25 September 2015 and assesses the situation for the year 2014. The study presents the data of 215 territorial entities and their quality of governance and is rated in absolute numbers from -2.5 to 2.5. It also gives the ratings of entities in percentiles.[1]

Georgia’s ratings have had a trend of improvement for the entire period in which the study has been conducted (1996-2014). In 2014, Georgia’s ratings reached their all-time maximum in all six indicators. Chart 1 reflects the dynamics of the indicators. 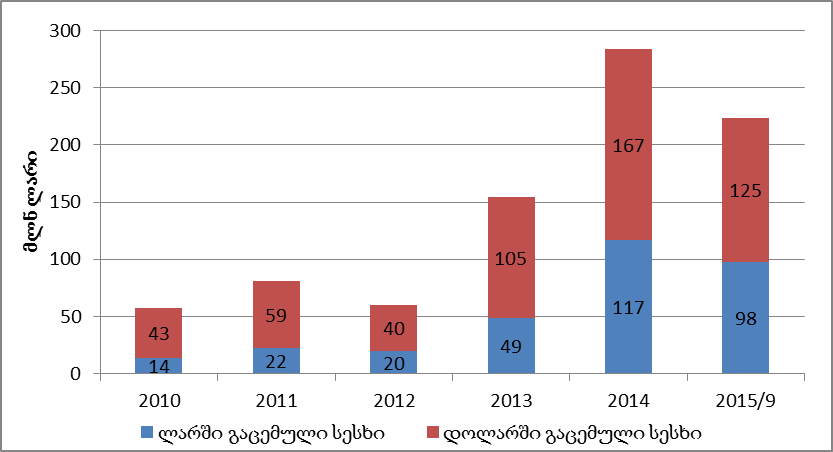 However, it is important to note that both Georgia’s improvement and worsening of its ratings rely upon the results achieved by the country itself as well as upon the changes in the ratings of other countries. Table 1 shows Georgia’s positions among the 215 countries participating in the study. 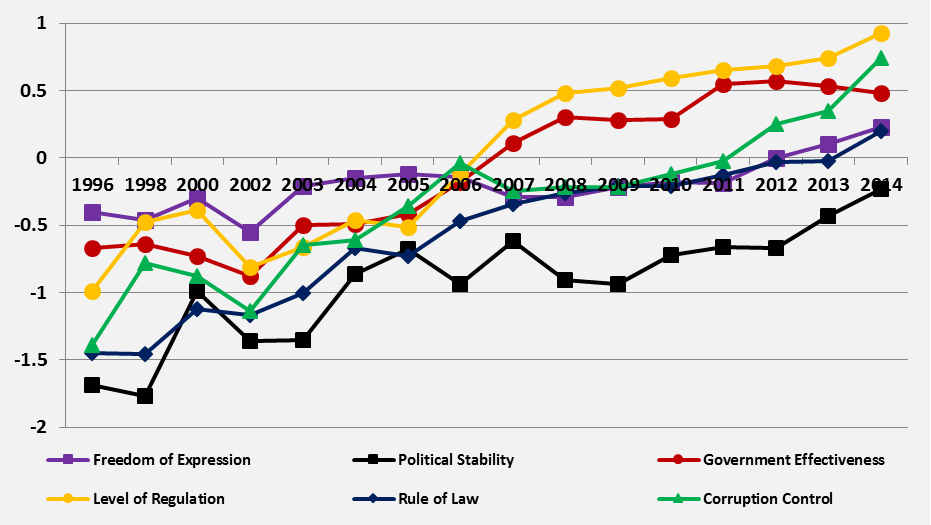 Theoretically, it is possible for a country’s percentile rank to improve even when its position in absolute numbers is worsening. This would happen if the indicators of the countries holding higher positions than Georgia in the past year worsen more than the indicators of Georgia itself. This was the case for Georgia’s 2014 government effectiveness indicator whose absolute number dropped from 0.53 in 2013 to 0.48 in 2014 (therefore worsening); however, despite the worsening of the government effectiveness indicator in absolute numbers, Georgia’s ratings improved and reached their all-time maximum – 71.6. As for the remaining five indicators, both the absolute numbers as well as the ratings improved and reached their historic maximum for the past 18 years in 2014. It should be pointed out that indicators were improving in the previous years as well which means that the results every year were demonstrating "record highs" and so this did not happen in 2014 alone.

Worldwide Governance Indicators assess the quality of governance of over 200 countries of the world. The assessment is provided in both absolute numbers as well as in the form of ratings. Absolute assessment reflects the situation in the countries taken separately and is useful for assessing how the specific indicators change over time. The percentile rank, on the other hand, assesses the results of a specific country as compared to those of the others. The 25 September 2015 Report reflects the situation for the year 2014.

According to these data, Georgia’s ratings improved in all of the six indicators and reached their historic maximum for the past 18 years in 2014. This was a continuation of a positive tendency of the past years. We have a positive trend in terms of absolute numbers as well. Five indicators have improved as compared to the previous year and have reached their maximum:  freedom of expression and accountability, political stability and the eradication of violence/terrorism, level of regulation, rule of law and corruption control. The government effectiveness indicator is the only exception. It reached its all-time maximum in 2012 (0.57), dropping to 0.53 in 2013 and falling even further in 2014 to 0.48 which is below the indicator of 2011. However, given the decrease in government effectiveness in other countries, Georgia’s ratings rose in this category as well. The 2015 data will be published in 2016.

FactCheck concludes that Irakli Gharibashvili’s statement is MOSTLY TRUE. [1] The percentile rank is a statistical indicator showing the percentage of those entities in the study as being equal or lower than the others within the overall distribution of ratings. For example, the absolute assessment of Georgia in the rule of law indicator was 0.2 in 2014 whilst the percentile rank was 64.42. This means that out of 215 countries, 64.42% have an absolute assessment which is equal or lower.
თეგები: