For the first nine months of the year, budget incomes have been fulfilled with a surplus… Budget spending has never been so equal

The Minister of Finance of Georgia, Nodar Khaduri, in his interview with journalists said that the

The Minister of Finance of Georgia, Nodar Khaduri, in his interview with journalists said that the state budget plan was fulfilled with a surplus by the third quarter of 2015. Mr Khaduri also noted that budget spending was equal this year and the changes in the currency exchange rate only affected the taking and paying of loans.

Changes in the currency exchange rate affected the fulfilment of state budget incomes. The currency exchange rate has a direct impact upon revenues received from grants and foreign borrowing which are denominated in foreign currency. Therefore, as a result of the GEL exchange rate, revenues received from foreign grants and foreign borrowing increase when denominated in GEL. Additionally, most of the country’s consumer goods are imported and so changes in the currency exchange rate affect the prices of goods and services. According to the National Statistics Office of Georgia, the annual inflation rate reached 5.2% in September 2015. Increased prices on goods and services resulted in growing tax incomes for the budget.

Of interest is that in spite of the depreciation of GEL against USD, revenues received from foreign borrowing are less than the planned amount. According to the nine-month plan, foreign debt has to be increased by GEL 768.7 million but, in fact, only GEL 643.5 million (83%) was transferred. If we take into consideration the fact that GEL has been depreciating against USD for the last months, we can then assume that USD-denominated foreign debt lags behind the plan even more. Foreign debt is mostly used to fund investment infrastructural projects which have a positive impact upon the country’s economic development. Instead of the planned GEL 443 million, which should be transferred as instalments covering preferential and long-term loans, only GEL 350 million (79% of the planned amount) was transferred. This fact illustrates that the pace of the implementation of state investment projects is slower as compared to the plan.

Budget Deficit and Expenditures According to Quarters (GEL millions) 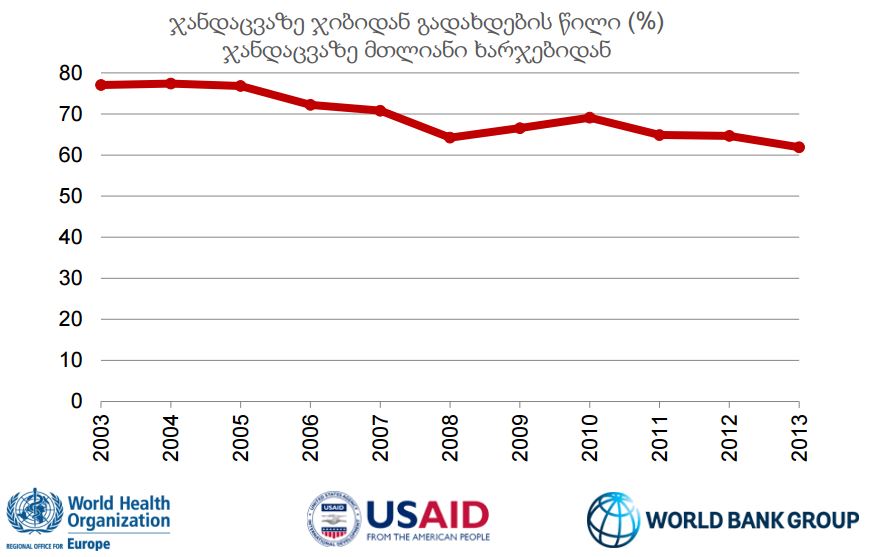 The annual plan for budget payments is GEL 9,575 million. Of this amount, GEL 6,912 was spent in the first nine months of 2015. The spending of an additional GEL 2,664 million is necessary before the end of the year in order to have the annual plan fulfilled. If we look at spending according to quarters, it is equal. The main delay is detected in the capital expenditure’s plan. According to the nine-month data, non-financial assets grew by GEL 417 million (76% of the planned amount) instead of the planned GEL 548 million. Therefore, unequal spending is registered in this part. According to the annual budget plan, the growth of non-financial assets should constitute GEL 774 million. Therefore, the spending of an additional GEL 357 million for capital projects is necessary for the remaining three months.

The budget deficit (without a change in the balance) reached GEL 284 million instead of the GEL 788 million as planned for the third quarter. The deficit is less than the planned amount due to the growth of budget income and the lagging behind in capital expenditures. At the end of the year, the annual budget deficit (without a change in the balance) is planned to grow to GEL 840 million. Therefore, in the case of budget fulfilment, the deficit will grow by an additional GEL 556 million before the end of the year which is a high number and contains risks for financial stability (GEL exchange rate, price levels).

The budget fulfilment is more equal as compared to the previous year. However, the growth of foreign debt and the fulfilment of capital expenditures still lag behind the plan. Additionally, the budget deficit (which impacts the GEL exchange rate) is unequally divided between the quarters.

Deficit spending of the budget increases the amount of GEL in circulation and encourages imports which create additional pressure upon the national currency. On the other hand, expansive fiscal policy is one of the instruments to incentivise economic growth. However, the efficiency of the fiscal policy does not depend upon the volume of expenditures but upon their structure. The growth of capital expenditures encourages the improvement of the economic environment and gives incentive to the private sector. In regard to expenditures for keeping the state apparatus and social welfare, they do not have a positive impact upon economic growth.

Of note is that 2015 is not an exceptional year when the income plan was fulfilled with surplus. Income was fulfilled with a surplus in previous years as well. If we take a look at the nine-month reports of the budget fulfilment rate in 2010 and 2011, we will see that the income plan was also fulfilled with a surplus. This was caused by economic growth and revenues received from investment projects whilst the depreciation of the currency and inflation had a major impact upon the growth of budget income this year.

According to the Treasury Service, the budget income plan is indeed fulfilled with a surplus. The revenue plan was fulfilled by 103%. Of this, tax incomes were 102% of the plan. In spite of this, there is a delay in foreign debt growth. Foreign debt growth constituted 76% of the planned amount. GEL depreciation also affected the growth of budget revenues. Due to the depreciation of GEL, revenues transferred from foreign grants and foreign borrowing grew when denominated in GEL. Additionally, the depreciation of the national currency caused an upsurge of prices on goods and services which in turn resulted in increased budget tax incomes.

The spending is relatively equal according to the quarters. However, if we look at the balance between income and expenditures – the deficit is unequal. The first two quarters of the year registered a deficit whilst the third quarter registered a surplus. The last, fourth quarter, will register a high deficit which will presumably have a negative impact upon the GEL exchange rate and the level of prices.

This year is not an unprecedented one when the state budget plan was fulfilled with a surplus. Budget fulfilment reports for 2010 and 2011 clearly illustrate that the state budget revenues plans were fulfilled with a surplus. This was caused by economic growth and receiving loans for investment projects and not by the depreciation of the national currency and inflation as it is in this year.

FactCheck concludes that Nodar Khaduri’s statement is HALF TRUE.
თეგები: