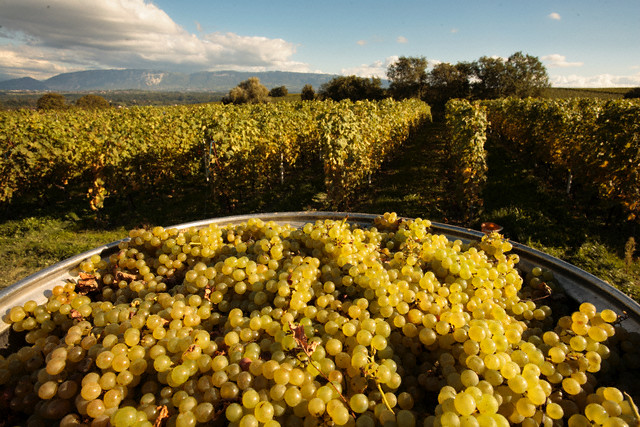 Subsidisation of the grape harvest – the actual way for the development of the field or a temporary solution to the problem?

It has already become a "tradition" in Georgia that the grape harvesting process is always paired with some sort of public agiotage with the 2015 grape harvest being no exception. The low grape prices have seriously angered farmers from the Kakheti region who were expecting continued subsidisation and not the prices for 2015 which are, for them, unacceptable. As a result, some farmers have joined in protests against the low prices. Given the importance of this issue, we attempted to analyse the situation in Georgian viticulture and winery over the past several years.

Vineyards occupy a total of 37,419 hectares in Georgia (according to the agricultural census of 2004) of which 22,227 hectares are located in the Kakheti region. A total of 5,000 hectares of new vineyards were planted

in Georgia in 2013 and 2014 (4,700 hectares in Kakheti). According to the explanation of industry specialists, the planting of new vineyards (in 2013 and 2014) was due to the successful grape harvests of the past several years and the high incomes from the sold grapes.

of the National Statistics Office of Georgia, the largest amount of grapes, after 2007 (227,000 tonnes), was harvested in 2014 (224,000 tonnes). The share of the Kakheti region in the overall amount of harvested grapes varied from 51% to 71% from 2007 to 2015. The amount of grapes processed for industrial purposes over the years changed as follows:

Amount of Grapes Processed for Industrial Purposes from 2009 to 2014

It should be pointed out that, over the years, grape prices, including subsidies, changed as follows:

As for the role of the government in determining grape prices, the state has been subsidising the grape harvest since 2008. The government decided to subsidise the grape harvest in order to neutralise the negative effects caused by the Russian embargo and encourage the fields of viticulture and winery. The amount of subsidies for grapes by year was as follows:

It should be noted that wine is among the top ten Georgian export goods and its share of overall export constituted 6.3% in 2014. The amount of exported wine by year was as follows:

In order to better analyse the situation in the fields of viticulture and winery, FactCheck attended the grape harvest process in Velistsikhe, Gurjaani Municipality. The majority of grape farmers are dissatisfied with grape prices in 2015 (Rkatsiteli – 60-70 tetri, Saperavi – 85 tetri). According to their explanation, in order to get a good harvest, the vines need to be pruned, chemically processed seven times (each process costs about GEL 220), ploughed three times and hoed two times. The actual costs of harvesting and transporting the grapes are also added to this. It takes about GEL 4,000 to process one hectare of grape vines. The amount of grapes that can be harvested on one hectare of land varies from ten to 12 tonnes which means that the production of 1 kg of white grapes costs 40 tetri whilst this is as much as 50-60 tetri

for red grapes. The chemicals necessary for maintaining grape vines have become expensive as compared to the previous year (and in most cases are of a lower quality) and the prices of transportation and daily labourers have also gone up whilst the prices of grapes have decreased. Farmers see no solution to their problems and are forced to be content with what is offered in terms of prices.

visited one of the grape processing factories in Gurjaani where we also witnessed some of the problems facing farmers. For example, they are sometimes forced to stand in line for days in order to sell their grapes. There are further delays as well owing to the age of the grape processing machines (they are quite old) which means that a lot of time is needed to process the grapes. In addition, the farmers are saying that the majority of the factories have their own vineyards and they process these grapes first. When we visited Gurjaani (30 September 2015, 16:00 pm), the grape processing factory had not yet started working.

asked the Founder of the Scientific Research Institute on Gardening, Viticulture and Winery, Davit Tamarashvili, to comment upon the situation in the fields of viticulture and winery in Georgia. According to his statement, the subsidisation in this field is absolutely unjustified and does not encourage development because the grape farmer becomes entirely dependent upon the state, does nothing for the development of the field and, further, does not pay attention to the quality of the grapes. Hence, according to Mr Tamarashvili, the state should change its approach, moving away from subsidisation into the direction of grant programmes which will facilitate the creation of small family farms and their provision with appropriate equipment and machinery. In addition, it is absolutely necessary to control the quality of wine and prevent any falsified production from entering the market. It would be justified for the state, among other measures, to tighten legal norms in the field.

As for grape prices, Mr Tamarashvili states that producing grapes on one hectare of land takes from GEL 4,000 to GEL 5,000. The net value of grapes, apart from the production costs, is also determined by the harvested amount. The year 2015 has been distinguished with a good harvest and a farmer will be able to harvest ten to 12 tonnes of red grapes (Saperavi) and 12-14 tonnes of white grapes on one hectare. In such a case, the net price for 1 kg of white grapes varies from 35 to 40 tetri whilst this is from 40 to 50 tetri for red grapes. However, there are farmers who spent more money and, consequently, the net price of grapes for them varies from 50 to 60 tetri.

This was partly due to the depreciation of GEL and the increase in the prices of fertilisers, chemicals and daily labour which have affected the net price of grapes.

We also asked the Director of the Tbilgvino Company, Zurab Margvelashvili, to comment upon this issue. According to his statement, the subsidisation of grapes is no longer effective at this point as it has not had actual results and the high grape prices in 2014 were due to the Georgian character." As the Russian market opened, everyone decided that investing in wine companies would be a good idea. This caused the number of wine companies to increase which, consequently, also increased the demand on grapes and their price as well. The increase in grape prices had a similar effect upon wine prices. The result was that Georgian wine had a much higher price than quality because of the first wave of a decrease in exports to Russia. "How can this problem be resolved? The farmer must work to increase the productivity of high quality grape vines. They must ensure long-term relations with wine companies without the involvement of the state. Only in this case will the grape price become stable and the quality of wine high," said Mr Margvelashvili.

As already pointed out earlier, grapes have been subsidised since 2008. Over these years, a total of GEL 133.8 million has been allocated from the state budget for these purposes. Despite the solid facilitation from the state, winery and viticulture are still fields with problems. Recent events in neighbouring countries have caused exports to top export destinations (Russia and Ukraine) to fall which, in its turn, has decreased the demand on grapes. In the case of a market economy, the prices of products are determined by the balance between demand and supply. The supply of grapes in 2015 (harvest) has increased (by 30,000 tonnes) as compared to the previous year whilst the demand (due to the drop in exports) has decreased. Given this background, grape prices should decrease as well. However, the promises made by politicians (including those from the previous as well as the incumbent governments) and the policy of subsidisation which has been going on for years have created inappropriate expectations among grape farmers. Hence, despite the fact that GEL 30 million has been allocated for the subsidisation of grapes in 2015, farmers were still disappointed by this year’s grape prices.

The fact that a perpetual subsidisation of the field is not a solution has become clear to the government as well. At a joint session of the Parliamentary Committees, the Minister of Agriculture, Otar Danelia, stated: "Subsidisation, in general, is not the right tool and we must do everything we can for it not be necessary in the future."

At this stage, grape farmers are still dependent upon subsidisation. They do not have sufficient material resources (money, infrastructure) to produce their own wine. The farmers’ knowledge in the field of business is also fairly limited. Hence, it would be more appropriate for the government to offer them alternative ways of help instead of subsidisation (for example:  grant programmes, facilitation of cooperatives, development of small family enterprises and so on). The diversification of the markets must be at the top of the list of priorities so that the decline in exports to one country alone (Russia, for example) does not create such problems in the future. The increase in the quality of Georgian wine is also an important challenge for the state.