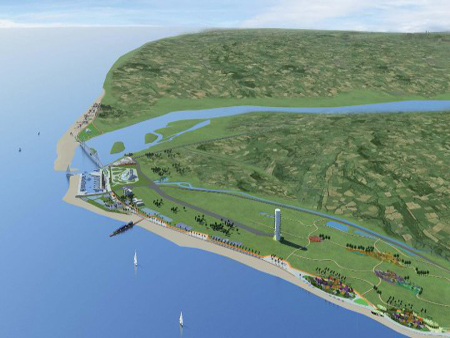 Will the construction of the port of Anaklia be started?

The United National Movement, during its time in power, planned to build the port of Lazika which was scheduled to be completed by the first half of 2015.  Lazika was supposed to be the largest port on Georgia’s Black Sea coast with an area of 85 hectares. The port project’s approximate cost was estimated to be GEL 535 million.

The construction of the city of Lazika, together with the port, was also envisaged within the project. The city was planned for the Colchis Plain, between Anaklia and Kulev.

In 2012, there were several project proposals for Lazika but the final decision required preparatory work and research before reaching a final plan.

During 2012, the Georgian Dream’s pre-election campaign offered sharp criticism of the Lazika project. However, after the Georgian Dream came to power, it took interest in building a deep-water port in the vicinity of Anaklia. On 30 September 2015, almost a year after coming to power, the then Prime Minister of Georgia, Bidzina Ivanishvili, announced plans to build the port of Anaklia.

demonstrated that there is no qualitative difference between the port of Lazika and the port of Anaklia. Both of them envisage the construction of a deep-water sea port in the vicinity of Anaklia and the usage of the Inguri Canyon close to Anaklia for this purpose. Therefore, we might conclude that the only difference between the two "concepts" is in their own names.

On 5 August 2014, an invitation was announced for all interested parties to take part in the Construction and Development of a New Deep-Water Black Sea Port in Anaklia project. Additionally, the Government of Georgia decided to establish a commission chaired by the Prime Minister which would consider the applications submitted. The information presented in the aforementioned invitation indicated that the port of Anaklia’s annual capacity would be 100 million tonnes. Further, it stated that the construction process would include seven steps with work on the port starting no later than 18 months after the signing of the contract and the port in operation no later than three years after the start of the construction.

Twelve companies expressed their interest in building the port of Anaklia. Of these, the commission short-listed seven companies. According to the statement of the Ministry of Economy and Sustainable Development in January 2015, the winning company would be selected from these seven and announced in September 2015. In May 2015, the commission decided on two consortia from the aforementioned seven on the short list. One of them is the Anaklia Development Consortium which was founded by the Chair of the Board of Trustees of TBC Bank, Mamuka Khazaradze, and cooperates with the American company, Conti Group, for this project. The second consortium is Anaklia Industrial Ecopark and Port founded by Georgian businessman, Temur Karchava, in  partnership with the Power Construction Corporation of China which is a daughter company of China’s largest company, PowerChina.

At present, the winning company has not yet been selected. According to the current Minister of Economy and Sustainable Development, Dimitri Kumsishvili, the construction of the port of Anaklia would start either in July or the beginning of August of 2016. Additionally, as clarified by Mr Kumsishvili: "A free industrial zone will be established adjacent to the port of Anaklia which will create additional jobs."

sought to obtain information on whether or not the date of the start of the construction work on the port of Anaklia would be moved again. As clarified by the Ministry of Economy and Sustainable Development, at the present moment working meetings with both of the short-listed consortia are still in progress and so the Ministry is unable to name the exact date when the process will be finished or the start date for the construction. The Ministry hopes that the winning company will be selected in two or three weeks as stated by the Minister himself.

FactCheck is following developments with regard to the port of Anaklia and will return to this topic again in the near future.